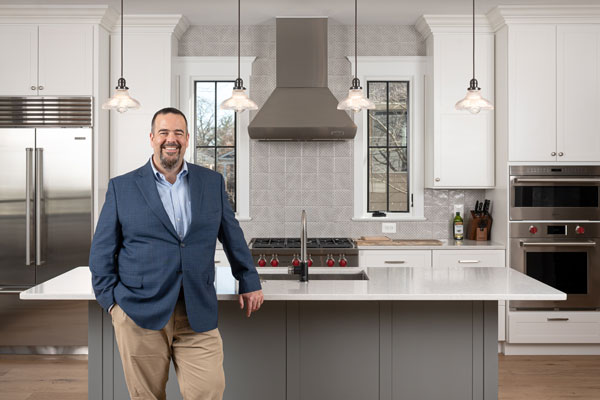 A large part of the existing housing stock in Arlington was built in the 1930s, ‘40s, and ‘50s. These homes served their purpose with dignity, and vast numbers of people raised families in them. But, as products of their time, they were usually modest, with small, separated rooms and economical amounts of glazing. They were uninsulated or only nominally insulated. They were heated with a furnace and did not have air-conditioning. Storage was at a minimum. Basements were not considered habitable – most were not dry. Great numbers of Arlington homes were built on small lots, for working-class families. Expansion normally meant enclosing an existing porch.

On the plus side, they were often built with 8- or 12-inch thick solid masonry walls. And the wood framing that was used came from old-growth forests and was much stronger than the same size lumber used today. Small and sturdy – that’s the starting point.

Red House Architects’ Bob Braddock is intimately familiar with Arlington houses. “As a residential architect, I am most often called upon to expand and remodel homes for growing families and in doing so, also address the existing shortcomings,” he says. “Today, we can open up large spaces with engineered lumber spans. We can bring in light with insulating windows and doors. We can combine robust insulation, draft-stoppage and new HVAC technology to heat, cool and maintain comfort while keeping energy expenditure at a minimum. And we can build with materials that have been reclaimed, recycled or diverted from the waste stream. These are all in addition to making beautiful and comfortable spaces that respond to the owner’s lifestyle and needs.”

“This is what I bring to the design,” Braddock says. “As well as care, creativity and especially order.”