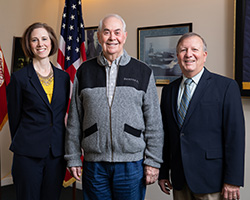 Vinson Hall Retirement Community was first established in 1969 to provide housing for the widows of naval officers. “The Naval Officers’ Wives’ Club fundraised for the purchase of the land and money to build the facility,” says Director of Marketing Stephanie Q. Lawrence.

Over 50 years later, Vinson Hall has stayed true to its heritage by providing two independent living facilities for those who dedicated their lives to military and government service, as well as their families. “It’s a pleasure for us to be able to serve our residents since they served our country,” says Lawrence.

Vinson Hall Retirement Community’s five-residence, 20-acre campus in McLean also offers assisted-living, memory support and short-term rehabilitation care with no residency requirement. “When Vinson Hall first opened, the concept of assisted living did not exist,” says Lawrence. “As our residents were aging here, those support services were built up around them.”

Vinson Hall is located inside the beltway, a convenient location for residents and their visitors. “We enable residents to retire in their neighborhood,” says Lawrence. “They can still access their benefits with Walter Reed and Fort Myer.” And with new and renovated facilities, residents can maintain an upscale lifestyle. The Willow Oak independent living residence, which opened in 2014, has spacious apartments with gourmet kitchens and screened-in porches.

Lawrence describes the residents as a source of inspiration and fulfillment at work. “The residents have stories that truly impact history,” says Lawrence. “They’re good role models.” That’s why the non-profit status of the organization is so important, Lawrence continues. “Everything is reinvested into the community and the residents. At Vinson Hall, we are committed to a resident-centered life.”