See Me Flags are popping up in locations throughout Arlington, Falls Church and Alexandria. 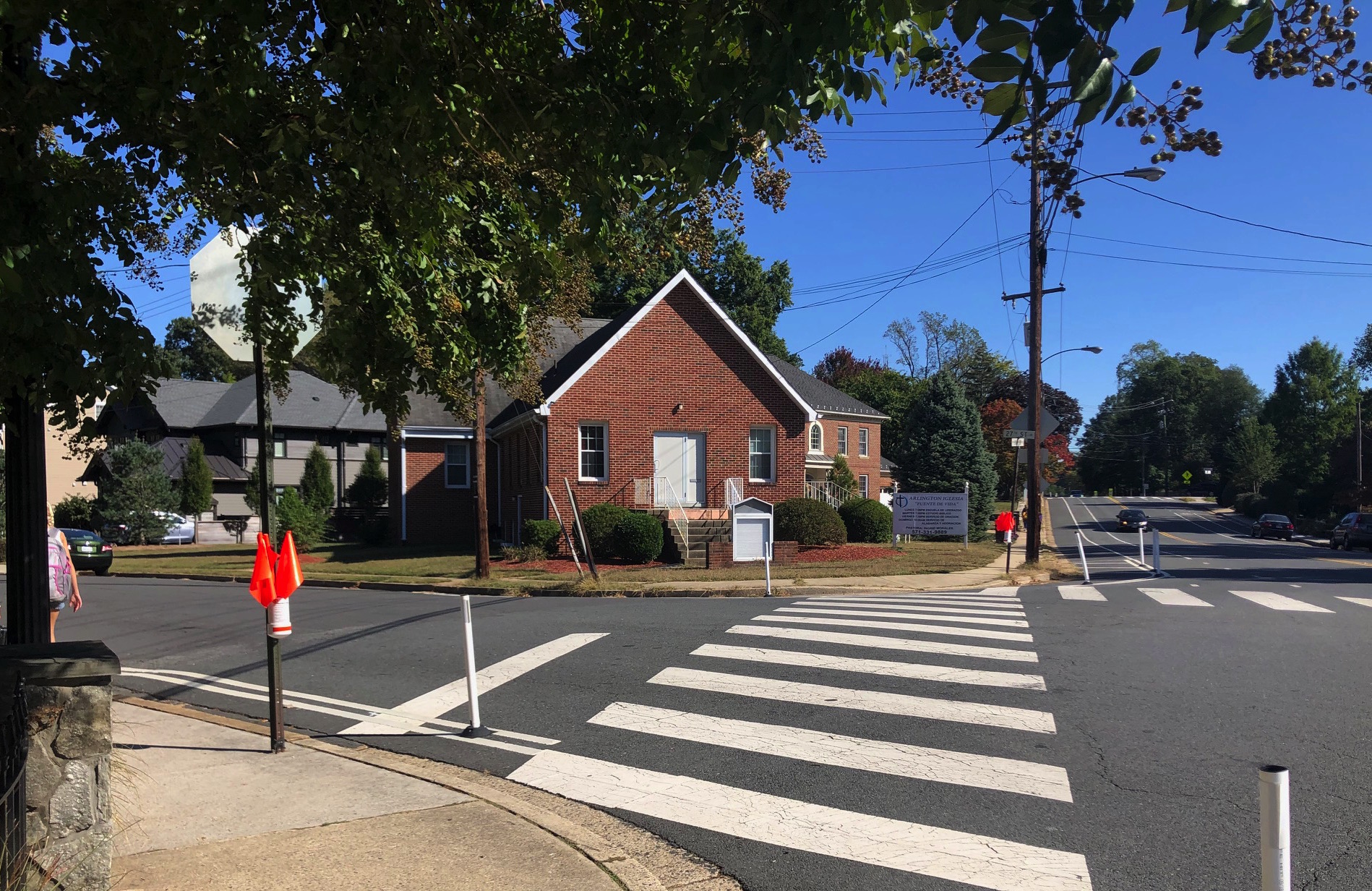 “The kids are coming and going in the morning and the afternoon, when the commuting hours are,” says the Arlington dad. “So there’s lots of kids walking across that crosswalk in the summer, and there’s lots of traffic.”

Yoder and other pool members raised concerns with officials at the county, state and federal levels, but were left without a feasible solution to make the intersection safer, due to cost and other issues. So, Yoder decided to take matters into his own hands.

Intent on creating a visible signal that would draw attention to pedestrians crossing the street, he settled on small orange flags that could be carried from curb to curb. In the summer of 2017, he installed his pilot project in a wire bin at the intersection of Lee Highway and John Marshall Drive.

“[Each flag makes] the drivers more aware that someone’s there,” says Yoder, a digital marketing executive, “but it also calls attention to the pedestrian that, ‘Hey, this is probably a more dangerous crosswalk, because there’s something here that’s out of the ordinary.'” 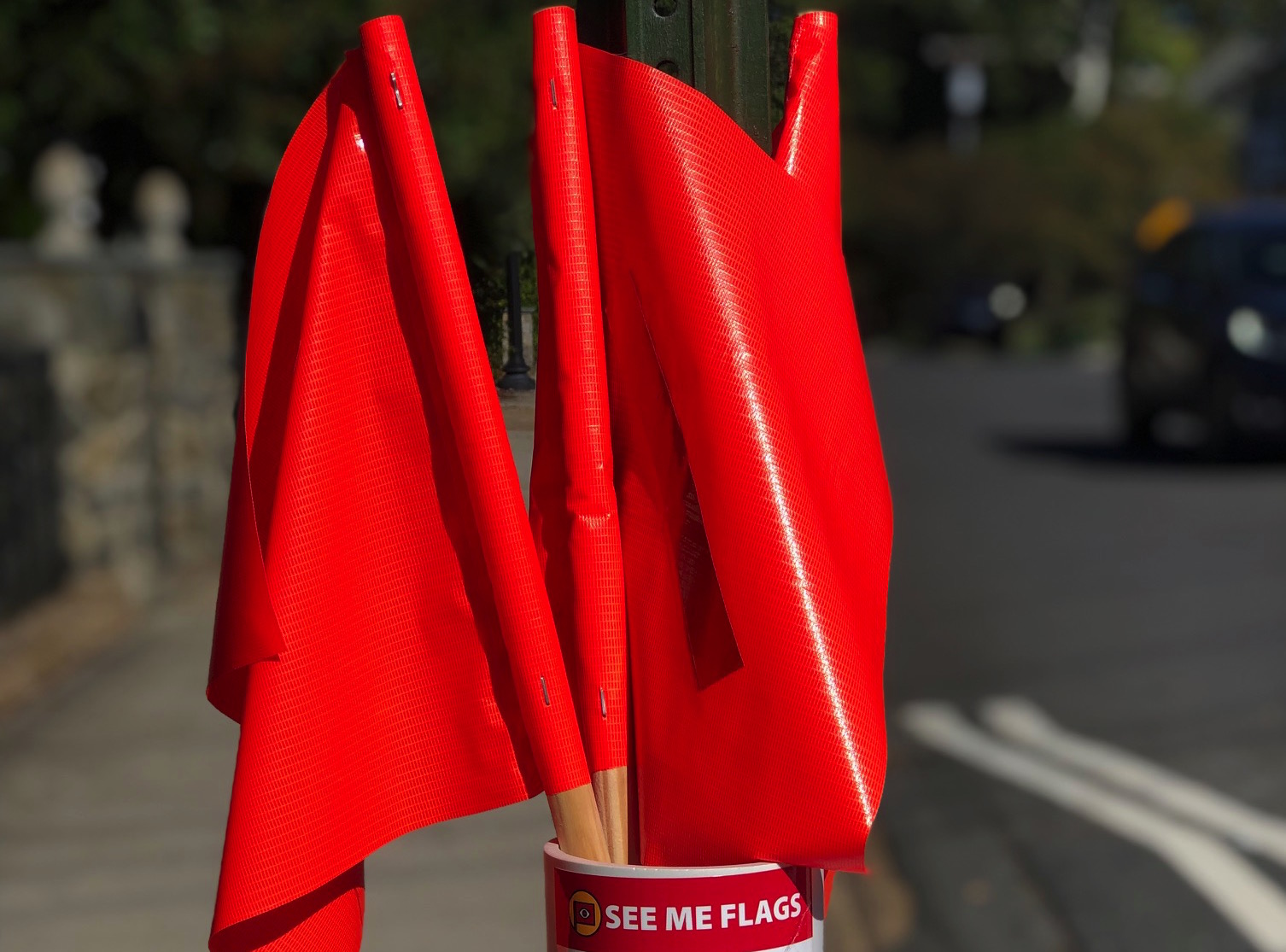 After the flags appeared at that first crosswalk, residents and civic associations started reaching out to Yoder with requests for flags at other crosswalks. Soon he was filling orders out of his garage. Eventually he contracted with a manufacturer and, earlier this year, created a website for the brand: See Me Flags.

Yoder is not the first to create crosswalk flags. The concept has been tested in multiple countries and in the U.S. since at least the 1990s. Programs in various cities have yielded mixed results, in part due to a lack of flag use at crosswalks where they’re available.

A 2006 study by the Transportation Research Board “found no formal studies in the literature on the effectiveness of crossing flags,” although the report did say that field studies found them to be “moderately effective” in two U.S. cities where they were installed, with vehicle yielding rates of 46 to 79 percent.

In Arlington, concerns over traffic safety have mounted in recent years as the county has experienced a population boom and increased traffic congestion. Though the total number of vehicle crashes in Arlington County increased slightly from 2017 to 2018, the number of pedestrian and bicycle crashes both declined over the same time span. In 2018, Arlington saw 125 collisions involving pedestrians, down from 135 the year prior, according to the most recent Arlington County Police Department annual report.

In 2019, however, there has seen a troublesome rise in pedestrian fatalities. Just last month, a 55-year-old woman walking three dogs became the fourth pedestrian in Arlington killed by a vehicle this year.  That brings the number of pedestrian deaths in 2019 equal to the combined total of traffic-related pedestrian fatalities in the preceding four years, according to Arlington County Police spokesperson Ashley Savage. The woman was struck at the intersection of Ohio Street and Little Falls Road, not far from the location where a mother of three was killed by a dump truck five years ago.

This week, See Me Flags will install a set of the flags at that intersection. The reflective neon-orange flags come bundled with all-weather storage containers that can be attached to street signs. At roughly $200 a set, they provide a far-cheaper alternative to HAWK (High-Intensity Activated crossWalk) beacon signals, which Yoder says can cost upwards of $20,000.  To date, See Me Flags have been shipped off to locations as far as Washington state.

This summer, the Arlington County Board approved a Vision Zero initiative, joining other municipalities nationwide in an effort to prevent traffic fatalities and severe injuries (based on a program that began in Europe in the 1990s). The ACPD—which was recognized earlier this year with a Governor’s Transportation Safety Award for efforts that may have contributed to the drop in pedestrian-related crashes in 2018—is taking a number of additional steps toward preventing pedestrian accidents and fatalities going forward, including participation in the region-wide Street Smart program.

Locally, Yoder has installed the flags at crossing locations in Arlington, Falls Church and Alexandria, including four sets sponsored by Arlington Public Schools. An anonymous sponsor recently paid to have flags installed on Washington Boulevard near Westover Beer Garden.

Other flag placements have been sponsored by local realtors, the Overlee Community Association, the Shirlington Civic Association and the Yorktown Civic Association, which, in addition to flags near Rock Spring Park, funded the recent installation of flags along North Harrison Street near the intersection with Lee Highway.

“I’ve always been a proponent of traffic and pedestrian safety,” Yorktown Civic Association president Michael Cantwell, a resident of that neighborhood for more than 21 years, told Arlington Magazine via email.

Cantwell says the civic organization formed a traffic safety committee two years ago and learned of the flags’ availability a few months back when Yoder reached out. The group invited Yoder and ACPD Lieutenant Kip Malcolm to discuss pedestrian safety at a civic association meeting in September, where the organization voted to sponsor three sets of flags.

For Yoder, the effort that began two years ago as a one-off project to ensure the safety of his own kids has expanded far beyond that first crosswalk.

“I didn’t know much about pedestrian safety, pedestrian laws prior to this experience—now I know more than I thought I ever would,” he says. “This is something that I never planned to be anything more than a way to get across Lee Highway.”

Collision Course: Are Our Neighborhoods Safe For Pedestrians and Cyclists?