The owners of this McLean beauty went for shingle-style architecture and whimsical furnishings. 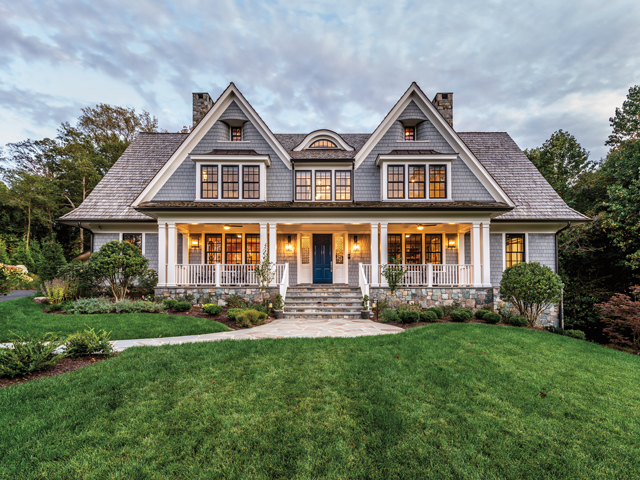 When Kara McCabe and Andrew Leblanc decided to build a new house in McLean—moving from Arlington to be closer to The Langley School, where their four boys are students—they hired GTM Architects, Artisan Builders and interior designer Skip Sroka to bring their dream to fruition.

McCabe then took advantage of the project’s extended timeline to do a deep dive for inspiration. “We lost her for three years,” jokes her sister Jennifer. “This was her full-time job!” 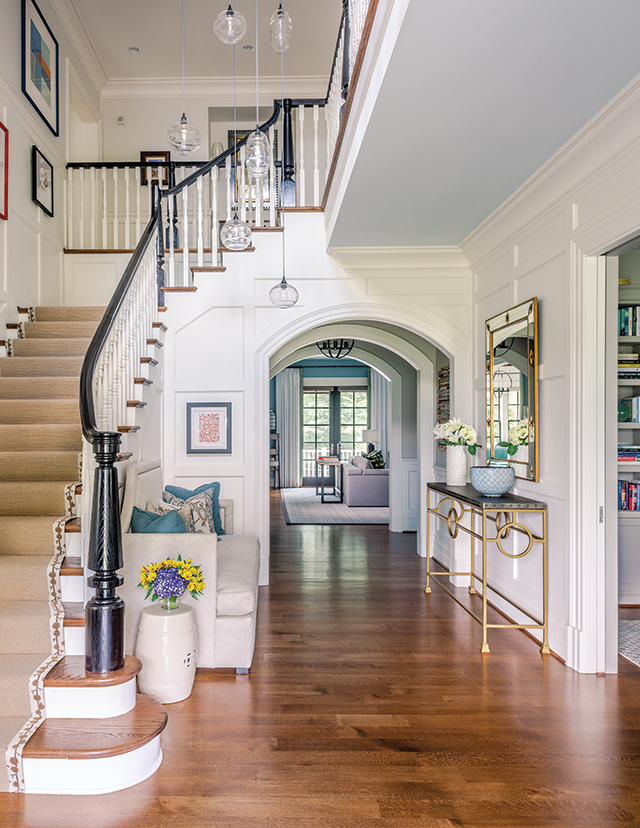 Designer Skip Sroka’s attention to detail is evident in the home’s crisp millwork and stair balusters, which he custom designed. The foyer lighting is by Hammerton Studio and the settee is from Bernhardt Furniture Co. Photo by Erik Kvalsvik

What emerged is an 11,500-square-foot home steeped in the shingle-style aesthetic that’s common to Cape Cod, where their mother lives, and more broadly to New England. McCabe and her siblings grew up in Lexington, Massachusetts.

But rather than lean on any Puritan notions of restraint, Sroka filled the interiors with a riot of color and pattern. The style is reminiscent of British designer Kit Kemp, whose whimsical hotel interiors in London and New York the couple enjoyed for years until the pandemic put Leblanc’s business travel on hold (he’s an attorney, and his wife sometimes joins him on trips). 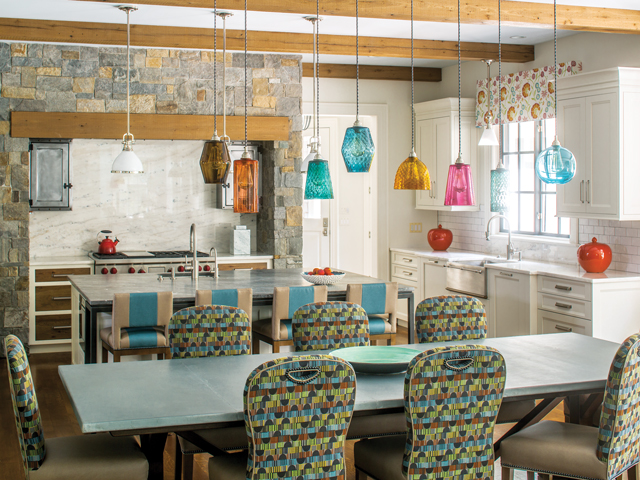 “Growing up, everything in our house was white or beige or gray,” McCabe says. “We would go to Kit’s hotels, and she had these crazy patterns and color combinations that you’d never think would go together, but it felt like home.” 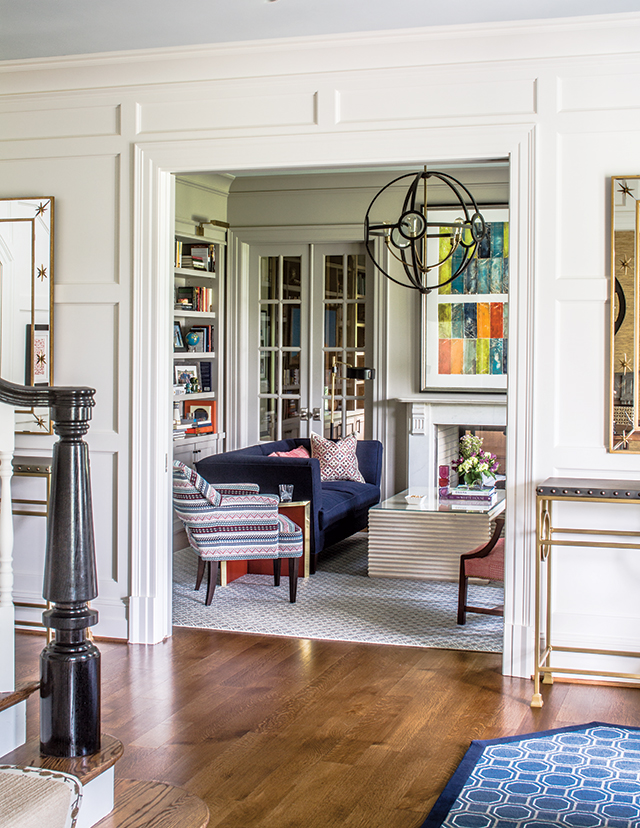 The front parlor’s bold colors and patterns were inspired by London designer Kit Kemp. The owners’ artwork hangs above a double fireplace that opens to a home office on the other side of the wall. Chandelier by Hinkley Lighting. Photo by Erik Kvalsvik

In choosing the interior palette, Sroka and project designer Elizabeth Shirey Bausch leaned heavily on coastal blues and greens that reminded the couple of New England. 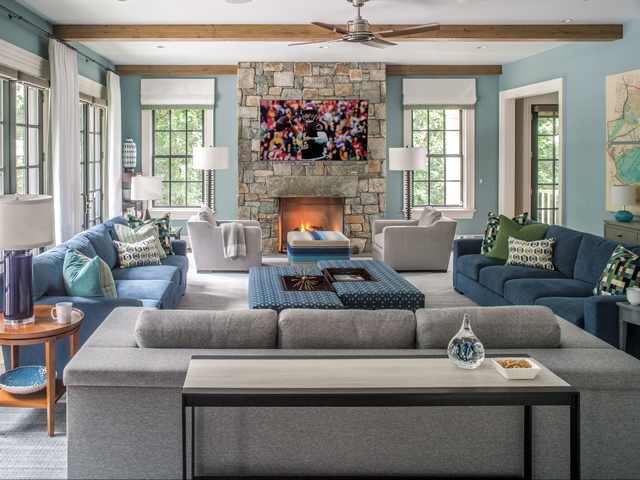 The family room’s breezy color scheme corresponds with a gallery of paintings that collectively reproduce a 1934 Census map of Cambridge, where McCabe’s parents grew up. “They wanted it to be colorful, welcome, open and fresh, and they weren’t bound by anything,” Sroka says.

GTM president George Myers and principal architect Rolando Valdez didn’t have to guess what their clients wanted architecturally. Every picture McCabe had saved to her idea file featured a shingled home with double gables framing bay windows above a generous front porch. 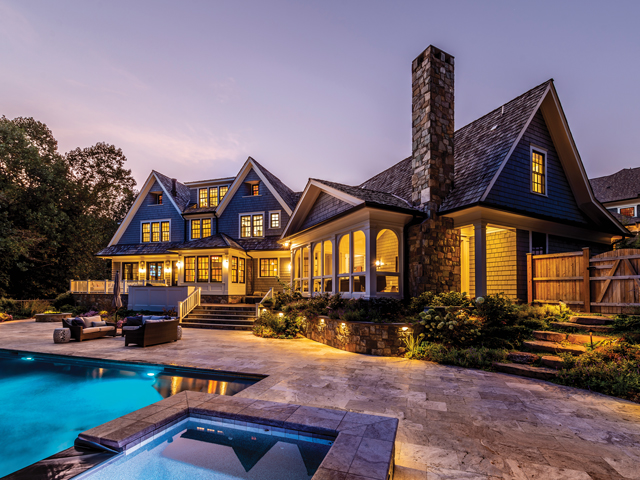 The shingle-style residence lives large, inside and out. The rear of the home features a covered porch and wraps around a wide patio with a pool and a fire pit. Photo by Diego Valdez

The topographical contours of the site also shaped the design, prompting the architects to “bend” the house around so that it gently frames a pool in back while the three-car garage turns away from the street. “Shingle-style houses often have plans that have angles and turns to them,” Myers explains. “It was all part of trying to create that old feel.” 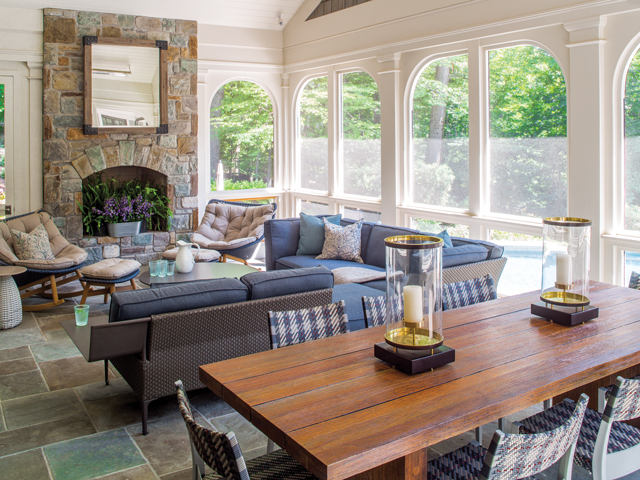 Nevertheless, a modern family lives here, so the design is equally mindful of the owners’ four boys, ranging in age from 10 to 14, plus two dogs. “The mudroom can’t be big enough,” says Myers, who also has four kids. “And I understand the notion of trying to make all the kids’ rooms a similar size—for me, it was like designing a house for myself.” 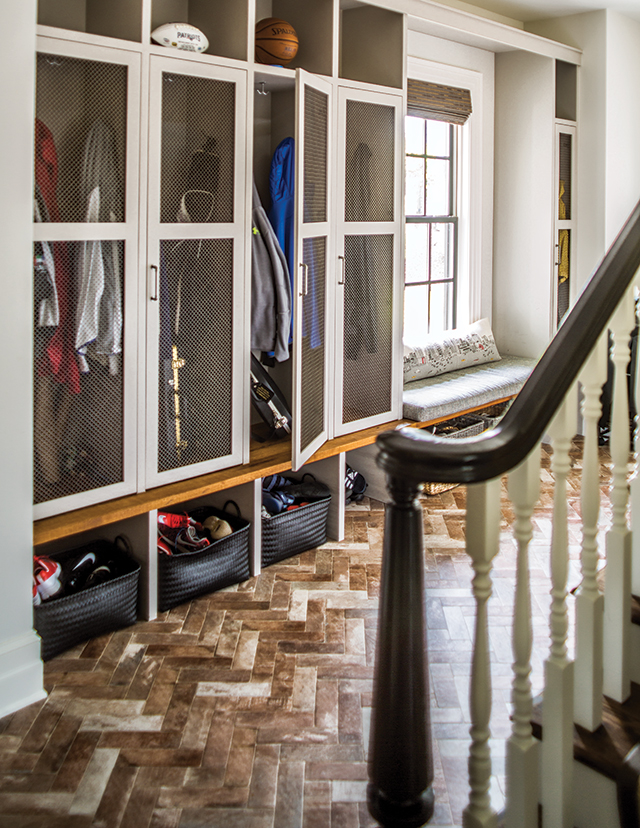 Sroka chose durable, stain-resistant fabrics for all of the upholstered furniture to make the entire house kid- and pet-friendly. Plus, McCabe says, “Every sofa has to be nap worthy! Nothing is stuffy.” 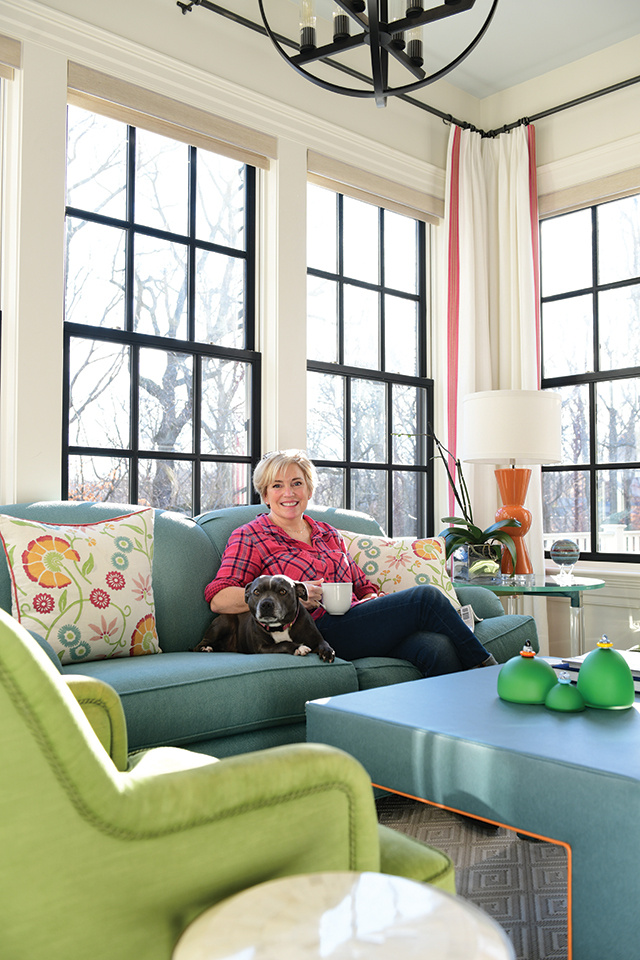 Kara McCabe relaxes in the sunroom on a sofa from her last house. The slipcovered coffee table is from Moss Home and the armchair is from CR Laine. Below: The family room has plenty of seating and a custom-designed bench/ottoman by Sroka. A console table fabricated by Mike Reid Weeks features a stone top by Marblex Design. Photo by Michael Ventura

After the home’s completion in 2018, the family hosted numerous celebrations and holiday gatherings, making the most of its ample entertainment spaces.

But even more important are the intimate moments the design affords—from a cozy window seat outside Grandma’s guest room to the fireside seating area in the master bedroom, where the boys like to hang out with their parents.

“It was all about giving it a very special look,” Sroka says. “It is a forever-home concept.” 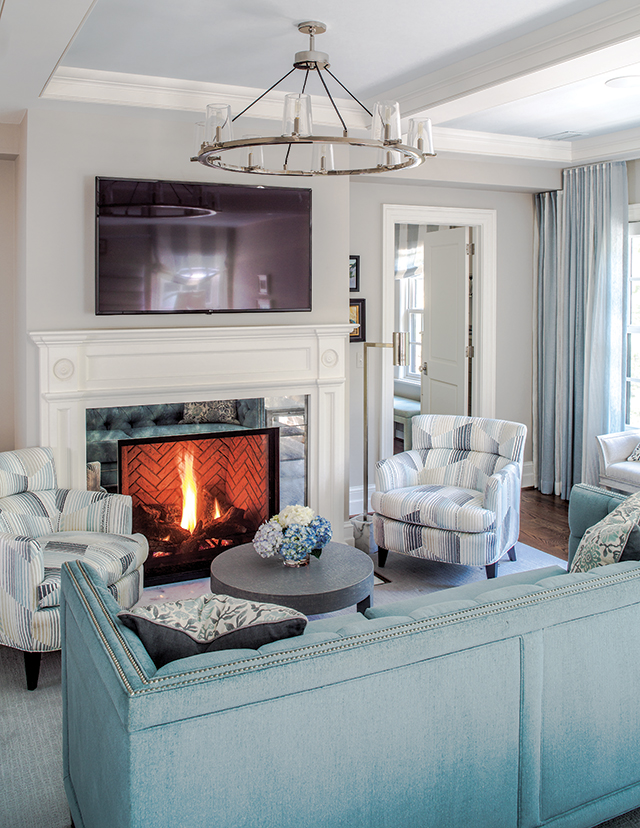 Kara McCabe and Andrew Leblanc wanted their bedroom to include a large seating area where they could hang out with their kids. Artisan Builders constructed a classic fireplace mantel with a mirrored surround. Photo by Erik Kvalsvik 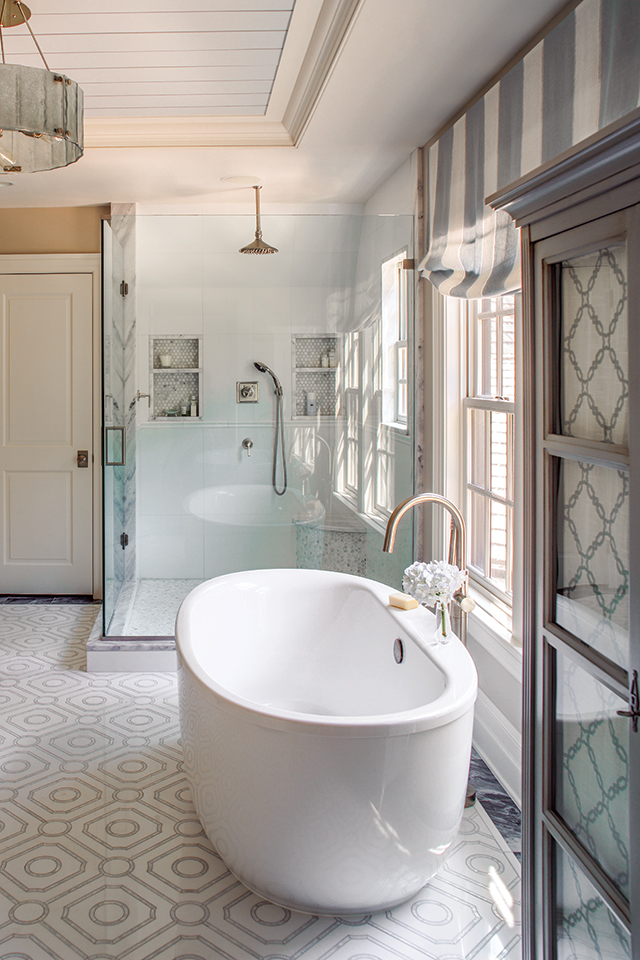 Related Stories:
Take Me To the River
An Oasis in Falls Church
American Classic