A Moment of Truth on AGT 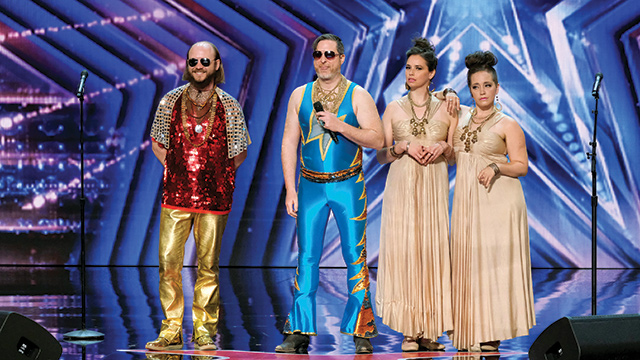 Rachel Camp has lived in Arlington’s Courthouse neighborhood since 2019, but she previously spent nearly a decade singing onstage in and around Philadelphia. That’s how she came to know Johnny Showcase, who, with his band, The Mystic Ticket, combines rock, jazz, funk, sequins and spandex in a comedic performance style she describes as “Philly stank.”

Little did Camp know that that connection would lead to her 2021 national television debut. In April, Showcase invited her to join his act in an audition for NBC’s America’s Got Talent (AGT), serving as one of two backup singers (along with her friend Tabitha Allen) in a duo billed as “The Truth.” As they belted out tunes with expressions of deadpan nonchalance, their role was not just to provide backup vocals, but also to challenge conventional beauty standards.

The audition, which aired in June, generated audience laughs and a standing ovation from the panel, including body-positive comments from judge Heidi Klum about The Truth’s armpit hair (a point of pride for Camp), and finally, a unanimous vote that sent the group to compete in the next round. They didn’t win big, but Camp still sees the experience as a win.

“The way that Johnny Showcase shows up onstage and shows up in body and shows up in vibe is exactly how I want to show up in my own life,” says the singer, who holds a degree in theater from Montclair State University in New Jersey and spent the summer rehearsing for a theater project with Team Sunshine Performance Corporation in Philly. She also teaches virtual voice lessons and does simulation exercises with Children’s Hospital of Philadelphia, where she helps doctors practice how to communicate with parents of pediatric patients by playing the role of a parent receiving stressful or bad news.