A Year of Loss

Mourning the child you never knew is a singular kind of grief. But the sisterhood of those who've felt that pain is broader than I realized. 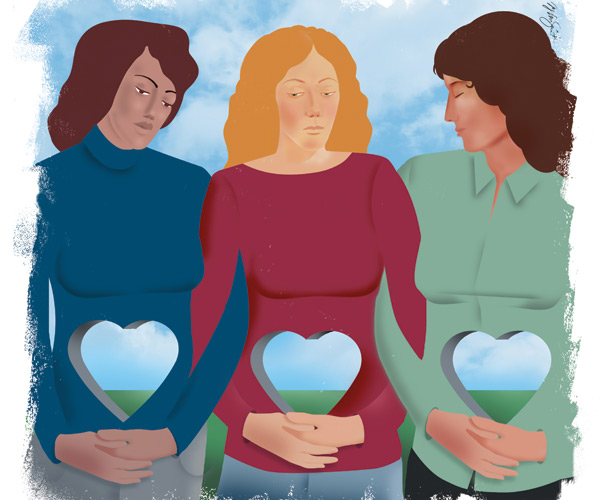 The waiting room was empty when we emerged from the darkened ultrasound room at my obstetricians’ office at Virginia Hospital Center. I wondered if the staff purposely scheduled scans that they knew might end tragically at lunchtime, when the office was closed. No one likes to see tears at the doctor’s office. Especially not at one that specializes in unborn children.

My husband, Bart, and I drove home. We cried. We picked up our toddler at school and walked home together, holding his tiny hands. We didn’t let go of him until he went to bed.

I had been 18 weeks’ pregnant. That evening, I wrote this email to our close friends and family:

We discovered today that we lost the baby we were expecting this December. We know that you will support us as we grieve, just as you shared our joy during the last few weeks. While miscarriage this late in a pregnancy isn’t common and we unfortunately don’t have any answers as to why this happened, we are confident that in the future we will be able to build our family.

Miscarriage is most common in the first trimester, so after four months, we had assumed we were in the clear. We had started talking about baby names and how we would transform our office into a nursery. But when I suddenly started to bleed, I knew it meant trouble. It had already happened to me twice before.

The first time, I was a few weeks shy of my due date with our son Mason. I’d had a perfect pregnancy, despite my “advanced” age of 36, and had been cleared to attend a birthday celebration in Delaware. A few hours after we arrived, sharp pains and bleeding had us scrambling at 11 p.m. on a Friday to find a local hospital with a labor and delivery unit. The 25-minute drive from Rehoboth Beach to Beebe Medical Center in Lewes felt like an eternity until I finally saw the baby’s heartbeat on the monitor and took a deep breath. Twelve hours later, we were parents.

No one could tell me why, but I’d had a placental abruption. My placenta had started to separate from my uterus early—a condition that occurs in less than 1 percent of pregnancies. We were lucky. Mason was small but completely healthy.

Two years later, we decided to try for a second child. I miscarried at five weeks. It was close to the holidays, so we opted not to tell our parents or anyone else. I slapped on a smile and drank a lot of mulled wine. The doctors assured us that we could start trying again soon after the New Year. They couldn’t say for certain what had happened; only that “something just wasn’t right.”

That spring, we were delighted once again to see the telltale double line in the window of a home pregnancy test. Early exams indicated all was well.

But at four and a half months, we found ourselves plummeting once again into that familiar place of pain, confusion and loss. “We can’t find a heartbeat,” my OB said softly after my emergency scan revealed a tiny, curled-up, silent fetus. I stared at the screen and kept repeating, “Why?”

One in six pregnancies end in miscarriage, according to the American College of Obstetricians and Gynecologists. After age 35, the rate becomes one in five. For women 40 and over, it sharply increases, to 40 percent. But only 1 percent of women who attempt to conceive endure multiple losses.

I was in the 1 percent. I knew rationally that it was worthless to beat myself up over the unknown, but weeks of extensive (and expensive) testing yielded no answers. Everything was fine, it seemed, until it wasn’t. No genetic blips. No abnormal clotting issues. My doctor’s only explanation was that the baby had simply “stopped developing.”

Friends and family called to offer support. Others asked to see us, but what could they do? We hadn’t lost a person we knew, whose life we could reminisce about. We were mourning our hopes for the child who might have been. Thankfully, this time around, only a few people tried to console us by saying the miscarriage was my body’s way of telling us that something “wasn’t right.” At 38, the idea of trying again after two losses in eight months was daunting enough.

So I hugged my kid. I went to work. I thanked people for their kind words. And I refrained from going into the details, for fear it would scare people who hadn’t had children, and sadden those who had.

What I didn’t anticipate were the friends who came forward and shared their own private struggles with miscarriage. I began to explore pregnancy loss message boards online and discovered another world of stories. If the posters themselves hadn’t had a miscarriage, their sister, mom, relative, colleague or friend had. Some had endured several before a viable birth. Others had had a successful pregnancy or two, only to find they suffered from secondary infertility and couldn’t carry another baby to term.

More than one late-night post described how someone just couldn’t face another dilation and curettage.

How could all of these heartbroken people be suffering in near silence, I wondered—typing their sorrow into a digital void or only sharing their pain after learning of someone else’s?

Four months later, as we prepared to mark my 39th birthday, I took another pregnancy test. Then another. I’ve never been so happy to not be able to drink champagne.

After a few months, I decided to post the news and my hopes for a rainbow baby (a term commonly used for a child born after a pregnancy loss) on a private parenting Facebook page:

It’s important for people to know they’re not alone and that despite the woeful lack of research and understanding around the issue, just how common [miscarriage] actually is, and that there is hope beyond the profound sadness of D&Cs and missing heartbeats. I know that loss has touched many of you, and I hope that you have all received the support you need to get through the dark, and extended your support to others. If anyone ever wants to talk about pregnancy loss, I am happy to listen and hold your hand.

Our second son, Alex, was born in August. He is a smiley, drooly chub who’ll let anyone snuggle him. He has unlimited baby love to share. His proud big brother greets him with a gentle kiss every day, and my heart swells when I glance at them in the rear-view mirror on our way home at the end of the day. I’m happily exhausted. But no matter how tired I am, if anyone ever wants to talk with me about miscarriage—I am here for you.

Sometimes, it’s the only way to get to the other side.

Jessica Strelitz is a freelance writer in Falls Church specializing in food, wine and spirits. She appreciates understanding waitstaff and restaurant bathrooms with changing tables now more than ever.