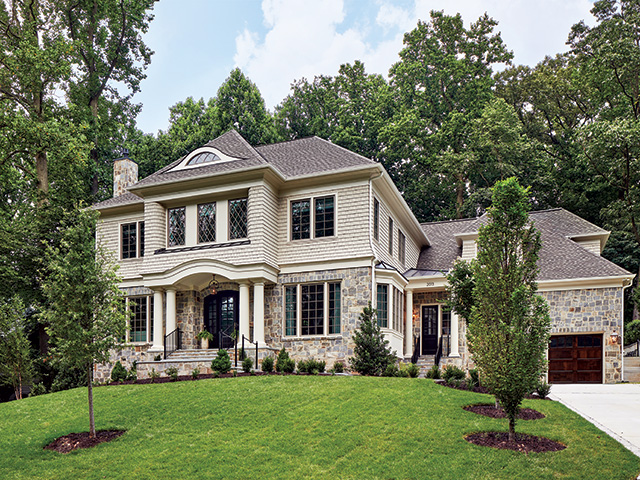 Patience finally paid off for Matt and Amy Well after two years of looking for the right piece of property in McLean’s Franklin Park. They’d lived in the neighborhood for 10 years in a house they knew they’d eventually outgrow with their two young boys. By the time a large, rather flat lot (a rarity in the hilly neighborhood) presented itself, they were ready to go with Daniel Valencic of Great Jones Build to construct a 7,400-square-foot custom home (completed in 2018) that looked like it had been there for a century, yet satisfied the needs of a busy young family with a love of entertaining.

“We wanted to combine that old charm and graciousness with the functionality of a new home,” says Amy, a global executive with Ernst & Young.

As a point of reference, she and Matt, who works in public affairs, had given Valencic and designer Pamela Harvey images of a stone country house they liked in Pennsylvania. It became the inspiration for a center-hall Colonial with generous scale and proportions, prominent moldings and trim, and spirited color choices—including a showstopping blue butler’s pantry.

Harvey took the owners’ cues and designed interiors that “feel very American in a sophisticated way,” she says, with jolts of red, white and blue, warmed by brass accents and caramel hues and texture. She treated every surface, including the ceilings, to invoke a sense of personality in each room, from a clubby study—where the ceiling trim echoes the wallpaper’s octagonal pattern—to a sunny breakfast room whose pale blue ceiling makes it feel like an open porch. 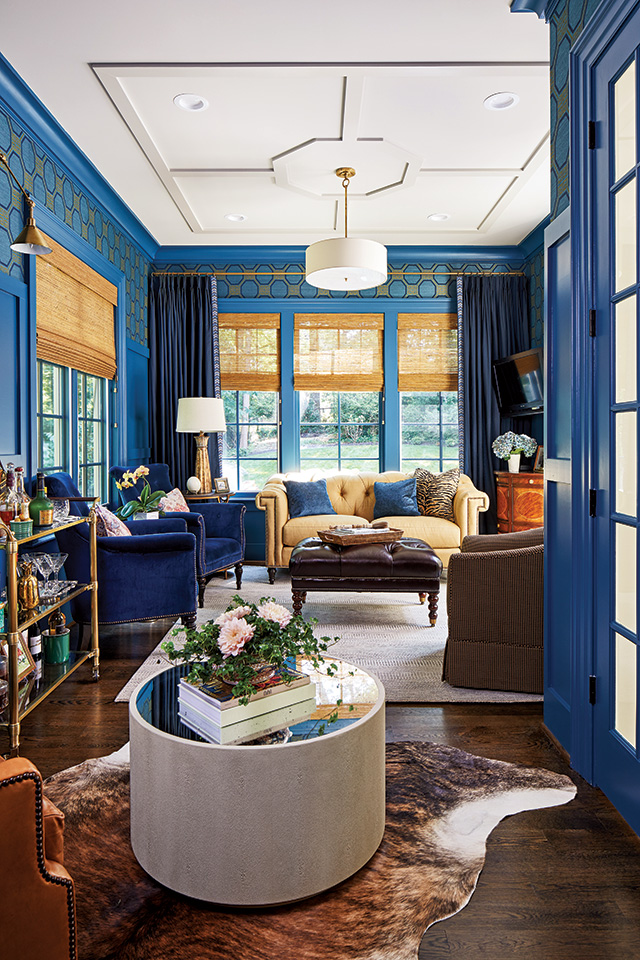 The study walls are painted in Benjamin Moore “Santa Monica Blue” and offset with octagonal wallpaper by Schumacher. Photo by Stacy Zarin Goldberg 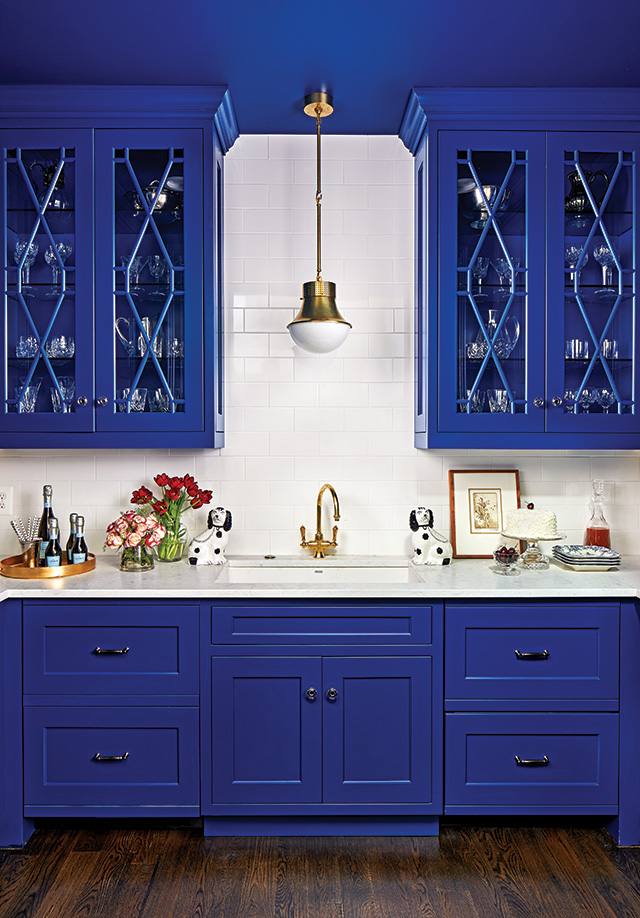 The electric blue butler’s pantry (Benjamin Moore “Southern Belle”) was inspired by a home the Wells saw in a magazine. Cabinets by McIntyre Cabinetry. Photo by Stacy Zarin Goldberg 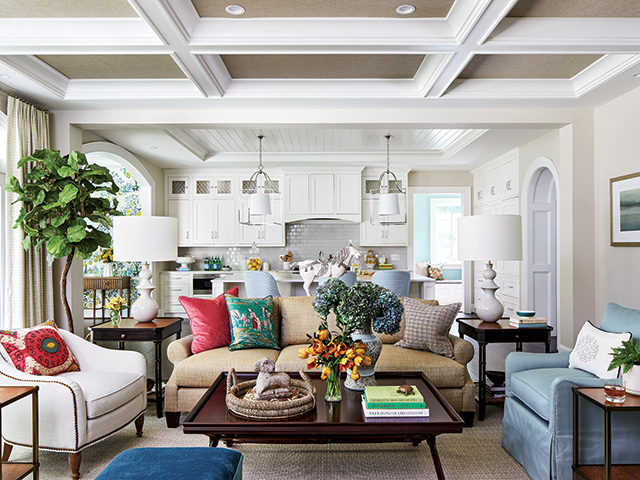 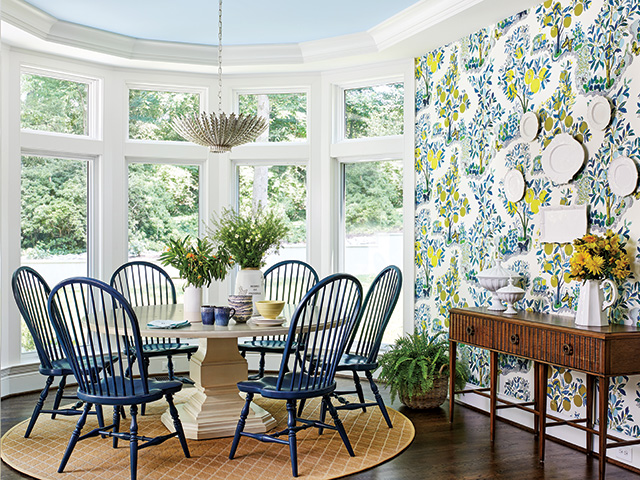 In the sunny breakfast room, designer Pamela Harvey had the ceiling painted light blue to look like the sky. The wallpaper is “Citrus Garden,” a 1947 design by Josef Frank for Schumacher. Photo by Stacy Zarin Goldberg 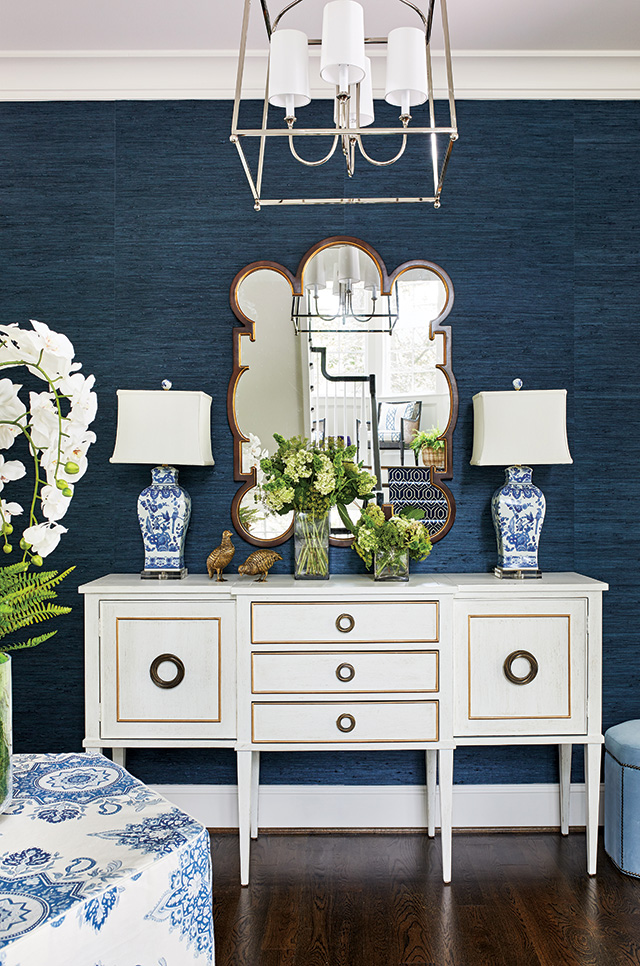 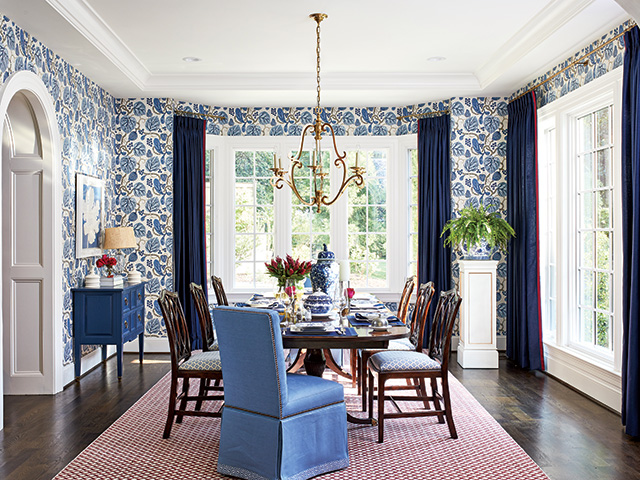 The dining room table, chairs and rug were pieces the owners already had. The wallpaper is “Astasia Sky” by William Yeoward. Chandelier by Visual Comfort & Co. Fabrics from Cowtan & Tout. Photo by Stacy Zarin Goldberg 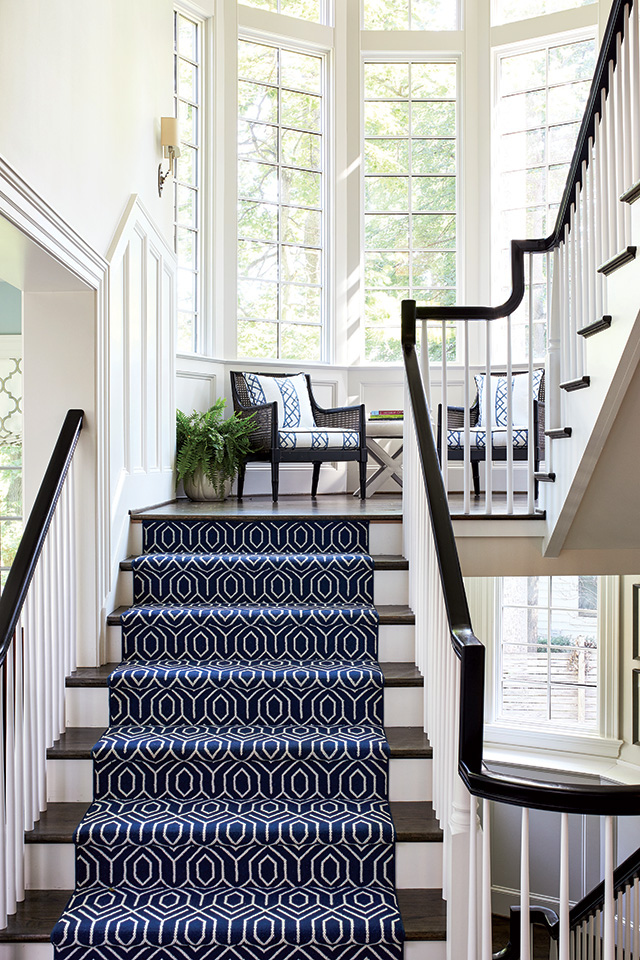 A tower of windows channels natural light into the stairwell. The patterned runner on the stairs is from Hatcher Floors. Photo by Stacy Zarin Goldberg

“We tried to tie the ceilings to what else architecturally was going on in each room,” says the designer.

Working in partnership with architect Sandy Fennell of Devereaux & Associates, Valencic clad the home’s exterior in classic cedar shake and stone, paying close attention to small details, all the way down to the tooled mortar joints, which he modeled after the circa-1927 St. Mary’s Episcopal Church in Arlington. “The materials we used on the façade are quite unique,” Valencic says.

Features such as a courtyard terrace in the rear and a towering glass-paned stair enclosure further distinguish the design. The floor plan also answers the family’s specific needs, including a small office off the master bedroom so Amy can make international calls late at night, and a sewing area in the laundry and linen center on the second floor.

As for that blue pantry downstairs? It’s often set up with a self-service bar for parties, and it’s finally given the couple an opportunity to unpack and display their grandparents’ china.