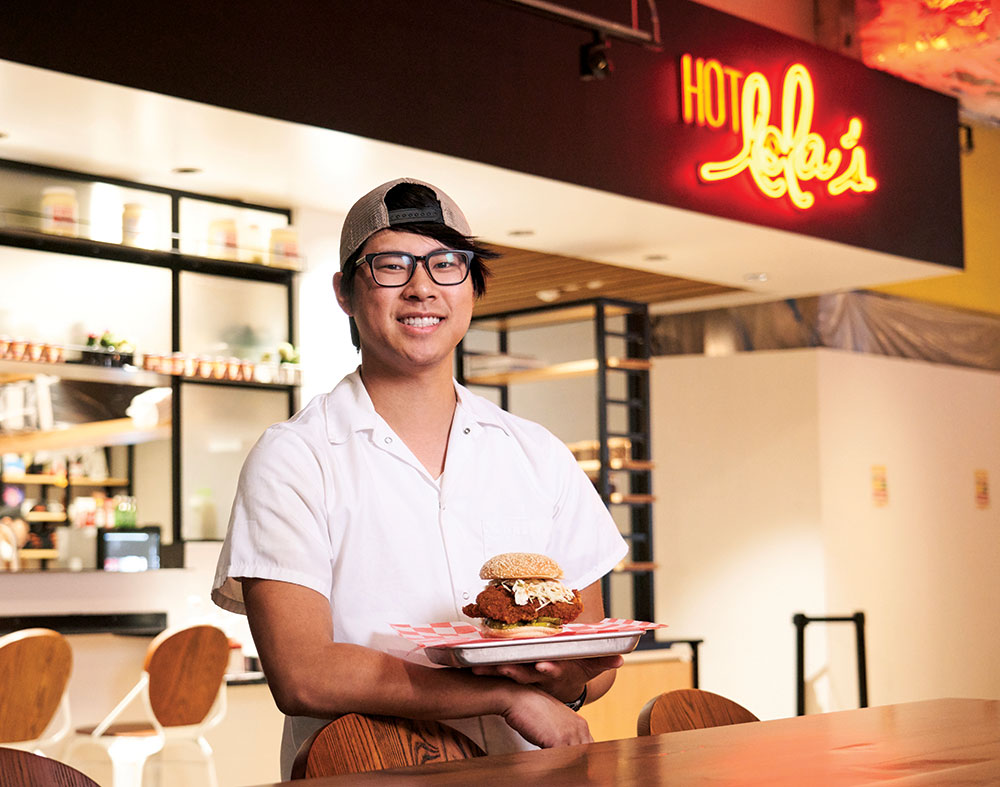 Chef Kevin Tien is a culinary hot commodity and purveyor of an even hotter one—the crispy, juicy, Sichuan-meets-Nashville hot chicken sandwich that is the star of his fast-casual joint, Hot Lola’s, which opened in Ballston Quarter in March. The Texas-born, Louisiana-raised chef, 31, holds degrees in finance and data analytics, but chose to go into the restaurant business. He previously worked at the acclaimed Houston restaurant Uchi.

Describe your swift and illustrious career trajectory in the D.C. area.

My fiancée got a job at the Holocaust Museum, so we came to Washington together in 2012. My first job was at KAZ Sushi Bistro, then [José Andrés’] Oyamel for 3½ years and sous-chef at Momofuku in 2015. Then I moved to Pineapple and Pearls as a morning line cook. I opened Himitsu [in D.C.’s Petworth neighborhood] with Carlie Steiner in 2016.

Lola is my greyhound-and-German-pointer mix. We adopted her from a rescue society in Louisiana while I was doing a food demo at a farmers market. Her favorite toy is a rubber chicken. When the opportunity came to open in Ballston Quarter, we worked out a deal at the end of 2017. I took the year to figure out what I wanted to do, which was to satisfy [customers] craving a chicken sandwich and marry fast food with a livable wage.

Tell us about that signature sandwich.

We use antibiotic-, hormone- and cage-free chicken tenders from a farm in Delaware. We brine them for 24 hours in a salt solution, then put them in a buttermilk bath for a few hours and coat them with rice flour, potato starch and all-purpose flour before frying to create all the crackly bits and extra crunch. I want to respect Nashville [tradition]. I make it my own with a warm, dry spice mix of cumin, fennel, star anise, cloves, Sichuan peppercorns, salt, sugar, cayenne and Korean chili flakes. After frying we coat [the chicken] with a hot chili oil blend.

You add 4 percent to every bill as a fair wage and wellness provision for your staff, then donate a portion of proceeds to the Human Rights Campaign, the nation’s largest LGBTQ advocacy organization. Why?

We add the 4 percent because we decided that this was the best way to help reduce wage disparity and provide health benefits to full-time employees. We donate a portion of sales for every chicken sandwich to the HRC. There is a lot of conversation around Chick-fil-A [and its charitable foundation’s donations to anti-LGBTQ organizations]. I wanted to represent a chicken sandwich shop on the opposite end of the spectrum.