Officials at a joint meeting kicked off a dialogue on housing affordability, workforce development and other key issues. 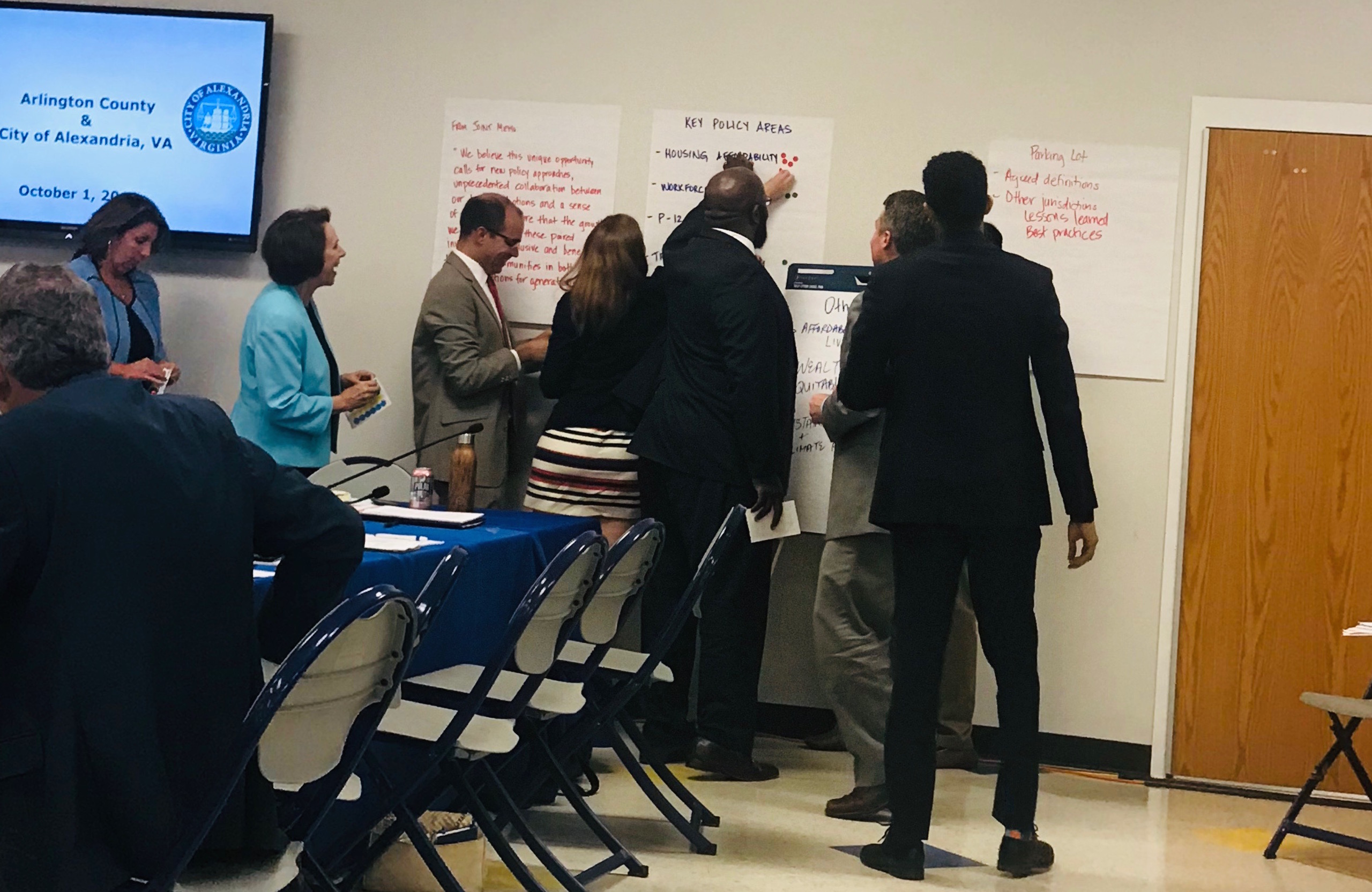 “A lot of folks in the lead-up to this have been sending us notes expecting that we’re going to ink some merger agreement tonight or we’re going to start exchanging property tonight,” Alexandria Mayor Justin Wilson said during an Oct. 1 joint meeting of the Arlington County Board and Alexandria City Council to discuss the impacts of Amazon’s HQ2. “If we’re exchanging property, just to be clear, I want Nam-Viet, The Italian Store and El Pollo Rico.”

On the docket was the potential creation of a collaborative body to address the coming arrivals of Amazon HQ2, the Virginia Tech Innovation Campus and the George Mason School of Computing, and specifically, their anticipated impacts on cost of living, infrastructure and more.

Amazon plans to invest more than $2.5 billion in its Arlington campus and employ some 25,000 workers—a prospect not lost on the roughly 5,000 job seekers who attended the company’s Career Day last month in Crystal City (whose business improvement district boundaries just expanded and may soon rebrand as National Landing).

But these seemingly positive developments could also have negative and disruptive side effects for both communities. Among them: the possible displacement of current residents, increased homelessness and traffic nightmares—all burdens with which Amazon’s first home, Seattle, has had to contend.

“And it’s borne by an amount of pessimism and optimism at the same time,” Dorsey said. “The pessimism comes in [when] business as usual in this country—particularly when it comes to economic growth and investment—typically leaves people behind.”

Collaborating on key issues—which in this case might take the form of a community development corporation, a redevelopment and housing authority (like this one), or an inclusive growth joint task force that taps local residents—is not a first for these two communities.

Over the course of the evening, officials cited past Arlington-Alexandria collaborations such as the Metroway and Crystal City Potomac Yard Transitway, the Covanta waste-to-energy facility in Alexandria’s West End and the Four Mile Run Restoration Project.

“[There are] many differences between us, but we have much more in common,” said Jinks, who served as Arlington County’s director of management and finance and budget director before joining Alexandria in 1999 as the city’s chief financial officer. We have “a long shared border, similar forms of government, urban conditions, [and] similar policy outlooks that help set the stage over a long time of successful inter-jurisdictional collaboration.”

The anticipated challenges associated with Amazon’s arrival present a “unique opportunity” for “unprecedented collaboration,” Dorsey and Wilson noted in a recent joint memo.

In it, they propose five policy areas to help guarantee “shared benefits” to both communities: housing affordability, workforce development, P-12 education, transportation/mobility and assistance for SWaMs (small businesses owned by women and minorities). The memo also mentions the need to consider “climate resilience” in decision-making.

“Did anybody not get the memo?” asked Rhae Parkes, a consultant brought in to facilitate the discussion.

“Metaphorically or literally?” an official joked.

After spending roughly 30 minutes hashing out the semantics of a mission statement-like paragraph, the group moved on to discuss which of the named issue areas were top priorities.

“If you talk to people, they talk about how expensive it is to live here—it’s living affordability,” said Arlington County Board Vice Chair Libby Garvey, emphasizing that affordability goes beyond the cost of housing. She mentioned transportation and child care as two other expenses that are draining local wallets.

“As we work this through, and we’re trying to serve all of these folks, we want to look at affordable living; it’s not just about where you sleep at night,” she said.

Earlier in the night, Garvey similarly stressed the need for both jurisdictions to ensure that certain residents are not left behind in the race toward innovation. That sentiment was echoed by several officials in the room, including Alexandria City Council Member Canek Aguirre.

Referencing articles written earlier this year on the potential displacement of lower-income Arlandria residents, with the median home price in Arlington on pace to increase by 17.2 percent by year’s end, Aguirre expressed concern: “When the economists are [saying], ‘Oh, it’s just a slight 1 percent change in this or it’s just a 2 percent change here or there, well those are people’s lives.”

After two hours of discussion, no clear path was carved out as to just how the bodies will address their top priorities (which they determined through an elaborate color-coded sticker vote to be housing affordability, SWaM business assistance and workforce development). But a strong sense of urgency emerged.

“What keeps me up at night is, what happens in the next 18 months? What’s happened over the last 12 months?” said Arlington County Board Member Katie Cristol. “I believe that we can deliver enough affordable homes with affordable rents in the next 10 or 15 years, [but] people are being priced out urgently.”

About That Amazon Move: 9 Questions With Katie Cristol