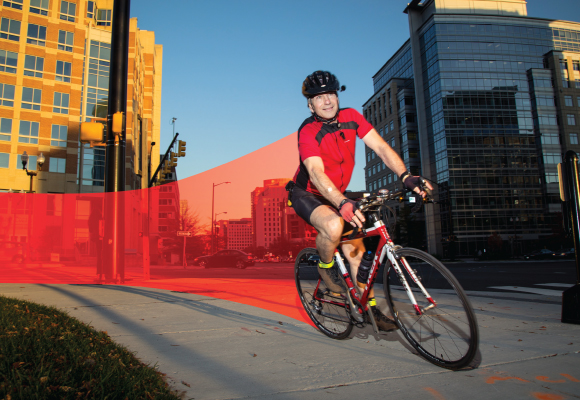 The City Is My Canvas

My haphazard bike routes make no sense at all. Until you see the bigger picture.

“WELL OFFICER, it’s like this: I’m asking you to open that perimeter security gate for me,” I explained, pointing to the secure zone beyond the 12-foot-high fence that surrounds the Washington Monument. 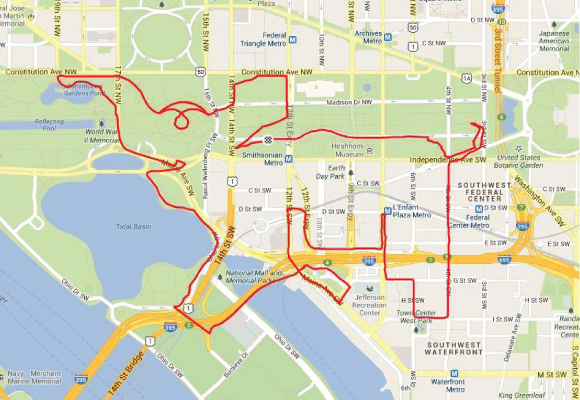 “I’ve gotta get in there and ride my bike in a tight circle around the base of the monument because I need to draw the eye of my elephant.”

Silence. I continued to plead my case. “Honestly, I’m an artist, not a terrorist. I create drawings on maps, then I ride the routes on my bike using a GPS, and that’s my drawing. Okay?”

It was a brisk and sloppy February morning (not the ideal conditions for a bike ride), but I was on a mission. My tires and shoes were already a muddy mess from crisscrossing the National Mall and cutting corners around museums. It seemed like my plan might just work out, until I met the cold stare of that armed security guard.

In the end, I was able to complete my GPS “drawing” of an elephant—a half-mile-tall pachyderm, trunk held high, galloping toward the Lincoln Memorial. The continuous line that created the picture was more than 7 miles long. And I did capture that all-important eye (let’s just say I worked out a solution), although I am not at liberty to explain the specifics of that negotiation 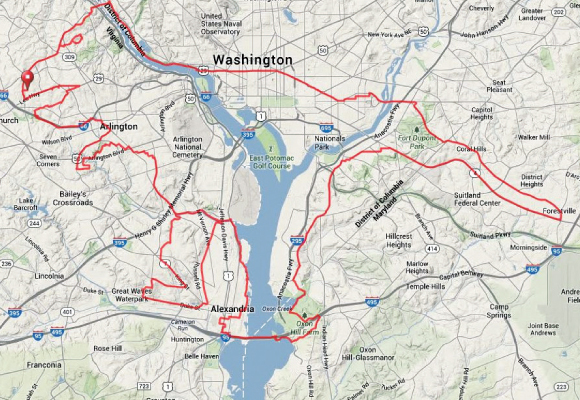 I have always loved outdoor challenges. An avid mountaineer, I am a 50-state highpointer, meaning I’ve climbed the highest peak in every state. I have also summited peaks in the Alps and the Andes, along with volcanoes in Mexico. Closer to home, I ride my bike—both for pleasure and for commuting—year round, logging about 150 miles per week. My cycling friends and I stay in touch via the Washington Area Bicyclist Association/BikeArlington Forum. I like cycling and I like drawing. That’s how I arrived at this idea that I could combine those dual passions into a new and different art form.

Over the past 10 months, I’ve created about 35 GPS “bike art” drawings. I begin each one by staring at a city map and seeing pictures in my mind. Once I have a rough concept (whether the drawing I want to complete is a turtle, a monkey, a jet aircraft or a seahorse), I zoom in to chart out the specific streets, sidewalks and stairways that I will need to ride to complete the picture. The actual drawing gets recorded once I hit the pavement on my road bike, a black Specialized Roubaix. Back at home, I upload the GPS data to a website such as Strava or Ride With GPS, and my drawing shows up as a red outline on a map.

Most of my images take weeks to plan and then a full day of hard riding to “draw.” I’ve found that each one brings unanticipated adventures. Like when my drawing needs a line “here” and the streets don’t connect—and that teeny patch of green that looks so easily scalable on the map (Oh look, a park!) turns out to be a wooded ravine with a rushing stream. I’ve done a lot of bushwhacking for art’s sake, including carrying my bike across some sketchy terrain.

Also complicating matters is the fact that each drawing is completed like a giant “Etch A Sketch,” in that there is no lifting of the drawing tool (my tires). That means careful route planning and intentional retracing of certain stretches of road to avoid extraneous lines on my finished drawing. This practice occasionally prompts funny looks from people on the street who, after watching me backtrack, may presume that I’m either lost, or that I’m a creep who is up to no good. I just smile and say hello, but then I’m gone, having silently collected the digital pixie dust I need to document my city-sized drawings. 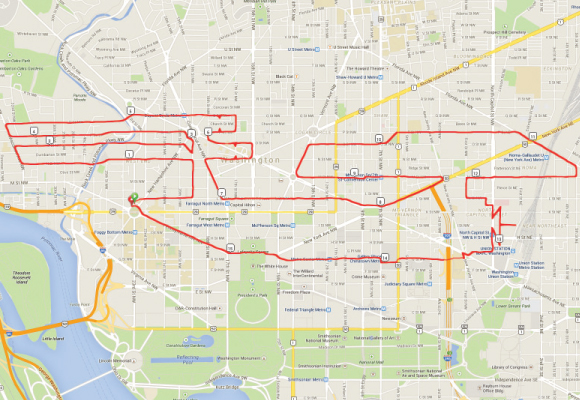 For me, looking at maps is like staring at clouds. I squint to find the hidden shapes and mysteries that are buried within them. And then I sweat to bring those shapes alive.

The tangle of nonlinear roadways that form parts of D.C. and Northern Virginia only makes things more interesting, and the “drawing” process has prompted me to explore many places that aren’t part of my normal routine. One recent project, “Beam Me Up, Scotty,” features the Starship Enterprise, its twin aft engines thrusting out of Georgetown and the saucer disc prow soaring eastward over Gallaudet University.

In “Bird of Peace”—completed on one of my Arlington rides—a dove holds an olive branch in its beak over Country Club Hills, while its tail feathers skirt Army Navy Drive to the south. The wingspan stretches from East Falls Church all the way to Rosslyn.

But “Godzilla” is perhaps my greatest artistic achievement thus far. Measuring 10 miles across, it is the largest drawing I’ve done and took the longest time to ride—nine hours from start to finish. The 66-mile route that created it crosses the Potomac River twice (at Chain Bridge and then Wilson Bridge), with the fabled monster’s mighty tail falling in suburban Maryland, its clawed feet crushing Alexandria and its razor-sharp jaw snapping at East Falls Church. This drawing used roads, streets, major highways, bike trails and one off-road segment through the woods to create part of the arm. And it came with a reward at the end: Once uploaded, it went viral among Internet cycling enthusiasts. I now have followers from Germany, England, Australia and Vietnam.

So the next time you see me in your neighborhood, crossing a stretch of road, then stopping and reversing course on my bike, don’t be alarmed. I’m not lost and you don’t need to call the police. Just check out my route online and my intentions will become clear.

An Arlington resident since age 12, David Pomeroy lives near East Falls Church and teaches economics at Marymount University. You can see the zoom-able map portfolio of his GPS drawings at ridewithgps.com/users/268291.