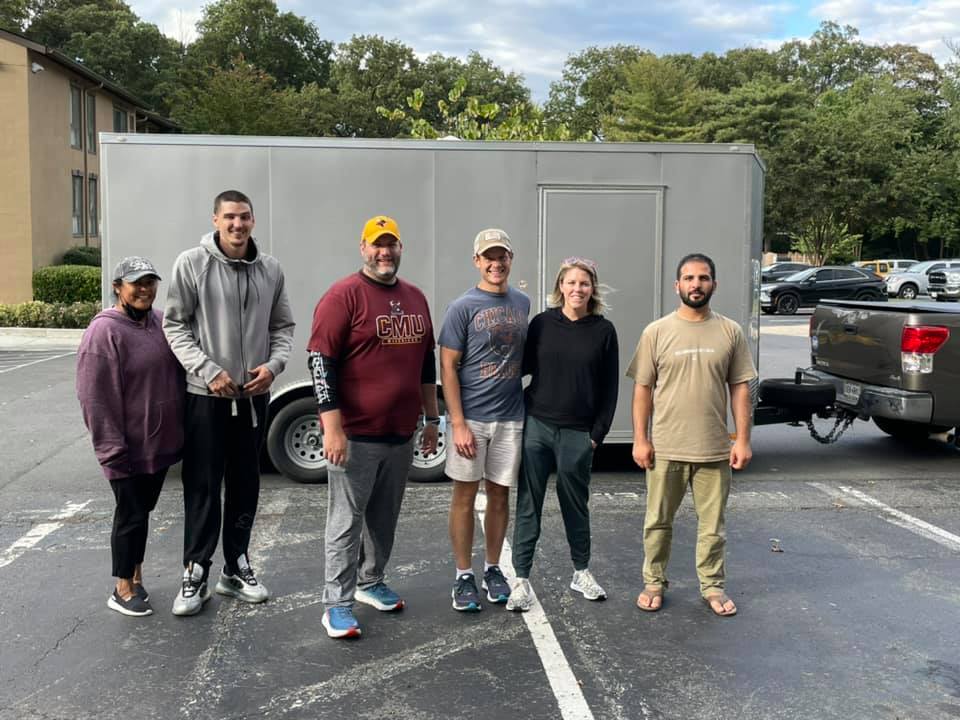 Volunteers with Arlington Neighbors Welcoming Afghans (ANWA) help families with everything from furnishing their new homes to food shopping and job placement. (Photo by Ryan Alvis)

After four failed attempts to leave Afghanistan, Maryam, a refugee in her 20s, finally made it out of the country last August with several members of her family. With nothing but a small bag of personal belongings, she flew from Afghanistan to Qatar to Germany to Dulles. But the trials she experienced at the Kabul airport’s periphery were far more harrowing than the journey.

“We were just running from the Taliban,” says Maryam, from the living room of her apartment in Northern Virginia, where she now lives. “They were following people and just terrifying them with gunshots and stuff just to make them run away. … We were just running to nowhere.”

When she stepped aboard an aircraft for the first leg of her journey, despite an undercurrent of fear and anxiety, Maryam was struck by a sense of peace.

“I was feeling relief. I was feeling calm,” she says. “I was exhausted enough not to think about it anymore. I thought that, ‘We are finally getting free.’”

After the Taliban took over Afghanistan on Aug. 15 last year,  resettlement agencies in the D.C. area began asking for support for the influx of Afghan refugees. As of early December, more than 3,700 Afghan refugees had relocated to the D.C. area; the new local residents are among some 76,000 refugees who have been admitted to the U.S. through Operation Allies Welcome. Many more families are expected to arrive in the coming months—though “safe havens” established last fall at several U.S. military bases are no longer operational, a forthcoming processing center in Leesburg will soon move an estimated 1,000 families per month from international refugee sites to new homes throughout the U.S.

Maryam—who is sharing her story using a pseudonym, as she has requested anonymity out of concerns for her family’s safety—is among hundreds of Afghan refugees who are adjusting to life in Northern Virginia with the help of Arlington Neighbors Welcoming Afghans (ANWA). The grassroots group, launched by Marine reservist Ryan Alvis, has assisted some 85 families with furnishings and basic housing needs, and raised $25,000 in individual contributions since last fall. Afghan refugees are eligible for federal stipends and assistance from local resettlement agencies as far as finding housing, but many of these local aid groups are understaffed and overwhelmed. (It’s a problem that may also be an issue for potential Ukrainian refugees in the U.S., if Russia sustains its military assault on Ukraine.)

Alvis—who spent more than a decade on active duty, including a 2013 deployment in Afghanistan—fell into the role of running the community group. Shortly after the fall of Kabul, a local resettlement agency put out a call on social media to help newly arriving families set up their homes. Alvis signed up and set up a Facebook group to help gather furnishings for the family she’d soon be assigned. But while waiting to hear from the agency, she got a cold call about a family in need and jumped on the opportunity to help using her own network of neighbors and friends. Throughout the fall and winter, scores of refugee families and local community members reached out to the newly formed ANWA, learning of the group through word of mouth.

“The need is so great. The volume of Afghans that arrive; these groups are overwhelmed,” Alvis says. “[Refugees] may have an apartment and some basic items but really not a comfortable household.”

ANWA’s Facebook group now boasts more than 1,600 members and has become the virtual gathering point for coordinating supplies, volunteers and team leads—point people for each arriving family who locate furniture, pantry items, diapers and whatever else a given family may need to build a new life. Each team lead stays in touch with the family until their homes are ready, and in some cases, beyond. Volunteers have helped families find jobs, register their kids for school and find legal resources, says Alvis.

“[It’s] almost like a host family,” Alvis says. “They don’t live in your home, but you’re here to be their U.S. contact to help them navigate the area.” 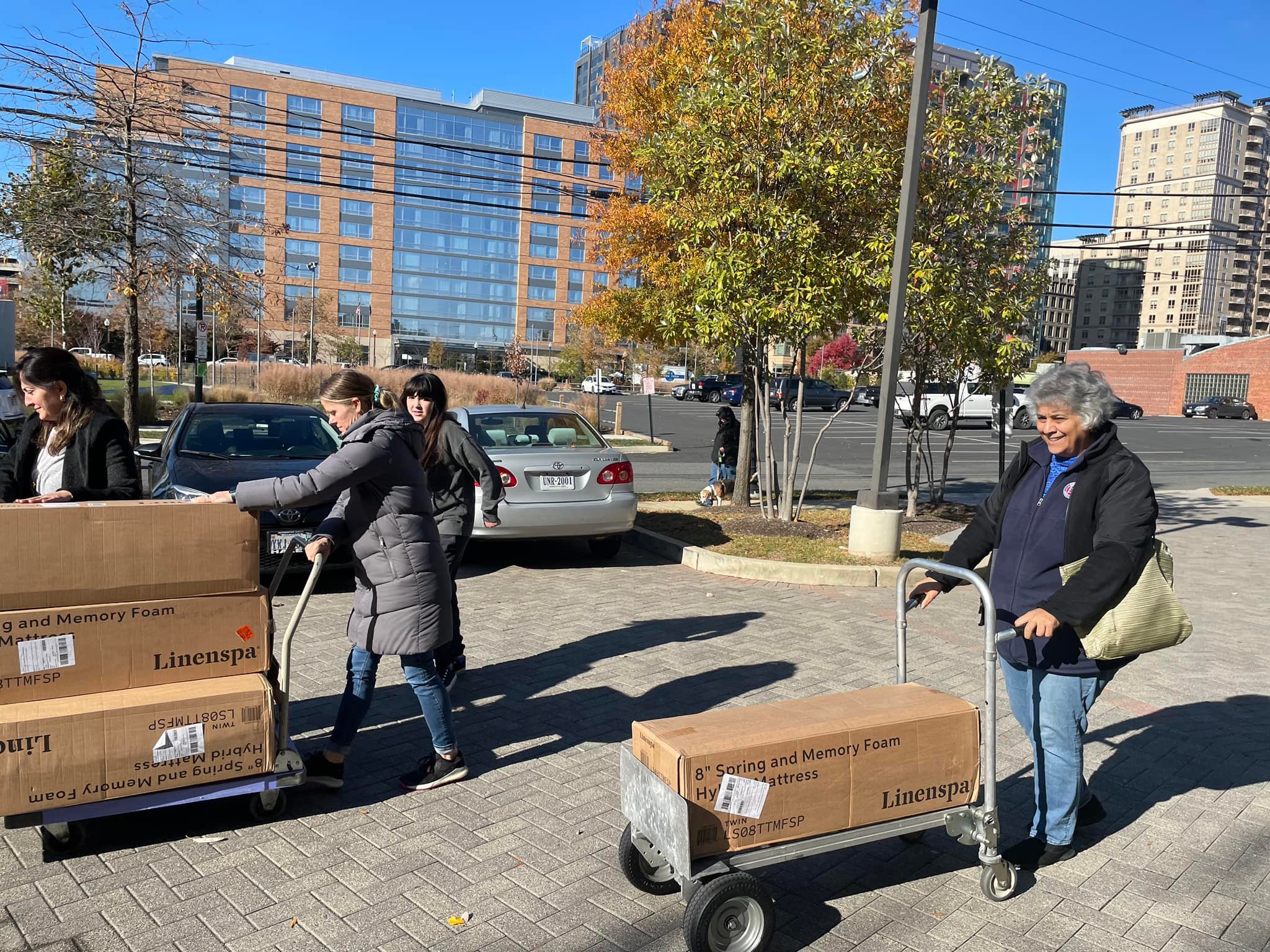 Late last year, Arlington resident Rebecca Longsworth responded to an ANWA Facebook post asking for food donations. That first step led to a more intense role as a team lead; now, in addition to her full-time job as a government contractor, Longsworth donates about 20 hours a week supporting families through ANWA. She and her husband spend much of their weekend time making Target runs and assembling furniture. Maryam’s family was the first she would help.

“We started working to get the place furnished. And it doesn’t end with furnishing,” says Longsworth, seated on a couch beside Maryam in her family’s new apartment. “For me, team lead means emotional support, job support … helping [connect families] to food pantries, transportation, cars, everything.”

When Maryam first met Longsworth, the Afghan refugee says the team lead stepped into her empty apartment and said something that has stayed with her.

“She said, ‘I’m with you from now until you have everything,’” Maryam says. “That was really heart-melting because we were really looking for someone to assist us like this, with no reason. To assist us just for being kind.”

With their new home furnished, Maryam’s family is trying to adapt to their new life in Virginia. Her parents are taking English language courses and her sibling is trying to obtain a work permit. Longsworth recently helped Maryam find work in her area of expertise. But plenty of uncertainty remains; as with many humanitarian parolees, Maryam has no clear path to legal permanent residence. Transitioning to a new reality, one that may change yet again, has been far from easy.

“The last six months of my life was, honestly, the most difficult period of my life,” Maryam says. “We are under so much pressure. But we hope that we are going to be happier.”

As Longsworth finishes her cup of cardamom-infused tea, Maryam shares a message on behalf of her family.

“We all really appreciate that you are not just a supporter of the house and this process, but [we appreciate] your emotional support so much, which is actually the most important,” Maryam says. “You helped us feel safe.”

Longsworth tears up. “I’m not going anywhere,” she says.

Ways You Can Help

Volunteer as a Team Lead: Find a team lead training on ANWA’s Facebook page or send a direct message to Alvis.

Make a Financial Contribution: Support the purchase of food and other basic necessities by donating to ANWA’s GoFundMe page.

Donate Furniture, Household Goods Clothing and Children’s Items: Check the Facebook group to see what team leads are looking for, and tell them what items you can contribute.