'The Helix,' the crown jewel of Amazon's PenPlace, will be wrapped in a vertical hiking trail that you can climb to the top.

A rendering of The Helix, as seen from the Pentagon lagoon. Image courtesy of NBBJ/Amazon.

Amazon on Feb. 2 submitted its proposed development plans for Phase 2 of its buildout at National Landing.

There’s lots in store for PenPlace, the next “superblock” development to transform the neighborhood—starting with the spiraling feat of contemporary architecture that will redefine Arlington’s skyline, which Amazon execs and the architects at NBBJ have dubbed “The Helix.”

Rising 350 feet, it won’t be Arlington’s tallest building (at 391 feet, Rosslyn’s Central Place holds that title), but if approved, it could be its most distinctive. Wrapped in a ribbon of greenery, with vegetation representing the indigenous plants of the Blue Ridge Mountains, the façade features two winding landscaped paths—essentially a double helix. Together they form an urban hill climb with sweeping views of Virginia and the District at the pinnacle. 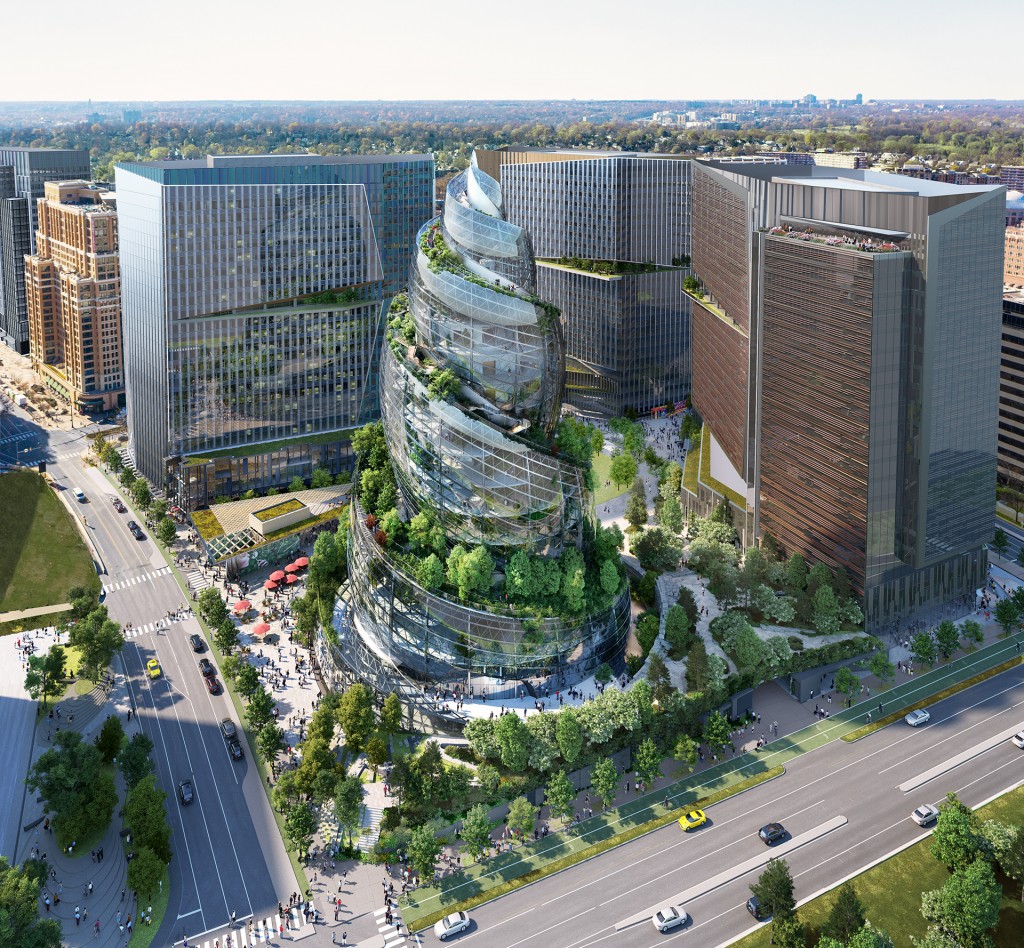 An aerial rendering of The Helix. The building’s 350-foot urban climb will be open to the public on select weekends every month. Image courtesy of NBBJ/Amazon.

Conceptually, The Helix shares some architectural DNA with The Spheres, the three bubble-like greenhouse conservatories that mark the tech giant’s headquarters campus in Seattle. “The design is inspired by natural forms and brings nature both inside and out,” explains Dale Alberda, lead architect at NBBJ. It’s all in keeping with the biophilic philosophy that access to sunlight and nature makes for happier, more productive people.

In December of 2019, the Arlington County Board voted to join the Biophilic Network of cities worldwide that have pledged to create spaces “where citizens have rich contact with the flourishing natural world as an element of daily life.”

Inside, The Helix will house a local artist-in-residence program, a meeting center and alternative workspaces for Amazon employees amid lush greenery. It’s not an office building, per se, but rather an amenity building meant to complement the three 22-story LEED Platinum office buildings (collectively providing 2.8 million square feet of office space) that will anchor the PenPlace superblock at the northwest corner of South Eads Street and 12th Street South in Pentagon City.

Amazon currently has just north of 1,600 employees at National Landing. The company is aiming to complete its $2.5 billion campus by 2025, and anticipates an Arlington workforce of 25,000 by 2030.

But officials stress that this urban oasis won’t be for Amazon employees only. “We believe that campuses should be neighborhoods that bring people together and not isolated, employee-only spaces that ignore their surroundings,” says John Schoettler, Amazon vice president, global real estate and facilities.

Pending approval, PenPlace will also include a daycare center, three retail pavilions with shops, restaurants and outdoor dining areas, and 2.5 acres of open space, with plans for public art installations, water features, farmers markets, an amphitheater for outdoor concerts and a dog park. 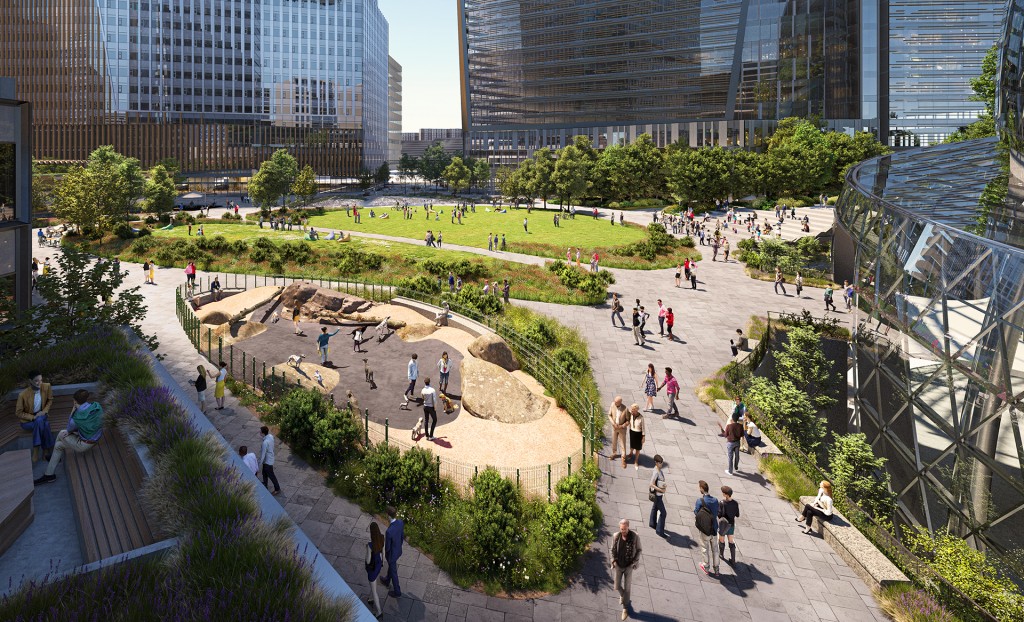 The site’s 2.5 acres of public open space will include landscaped greens and a dog park. Image courtesy of NBBJ/Amazon.

The goal is to create an “18-hour district,” that doesn’t shut down when the work day is over, Schoettler says.

Prioritizing pedestrians and cyclists over cars, the site design will add another quarter-mile of protected bike lanes and more than 950 bike parking spaces, Alberda says, tucking its 2,100 car parking spaces and truck loading docks underground. The project will be within walking distance of two Metro stations, bus lines and commuter rail. 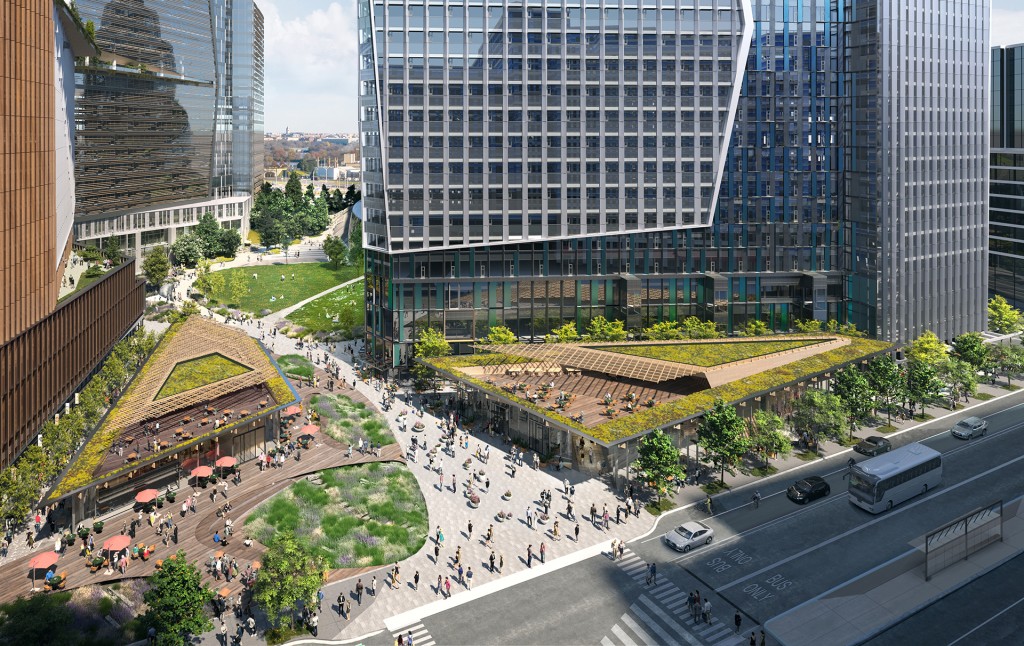 A rendering of 12th Street South. Image courtesy of NBBJ/Amazon.

Schoettler says the retail strategy will prioritize locally-owned shops and restaurants over national brands. Single-story boutiques, cafes and fast-casual eateries with rooftop dining terraces will maintain a human scale on the perimeter, with tall buildings stepped back away from the street.  The site plan envisions intimate pedestrian promenades and plazas with outdoor tables and benches. 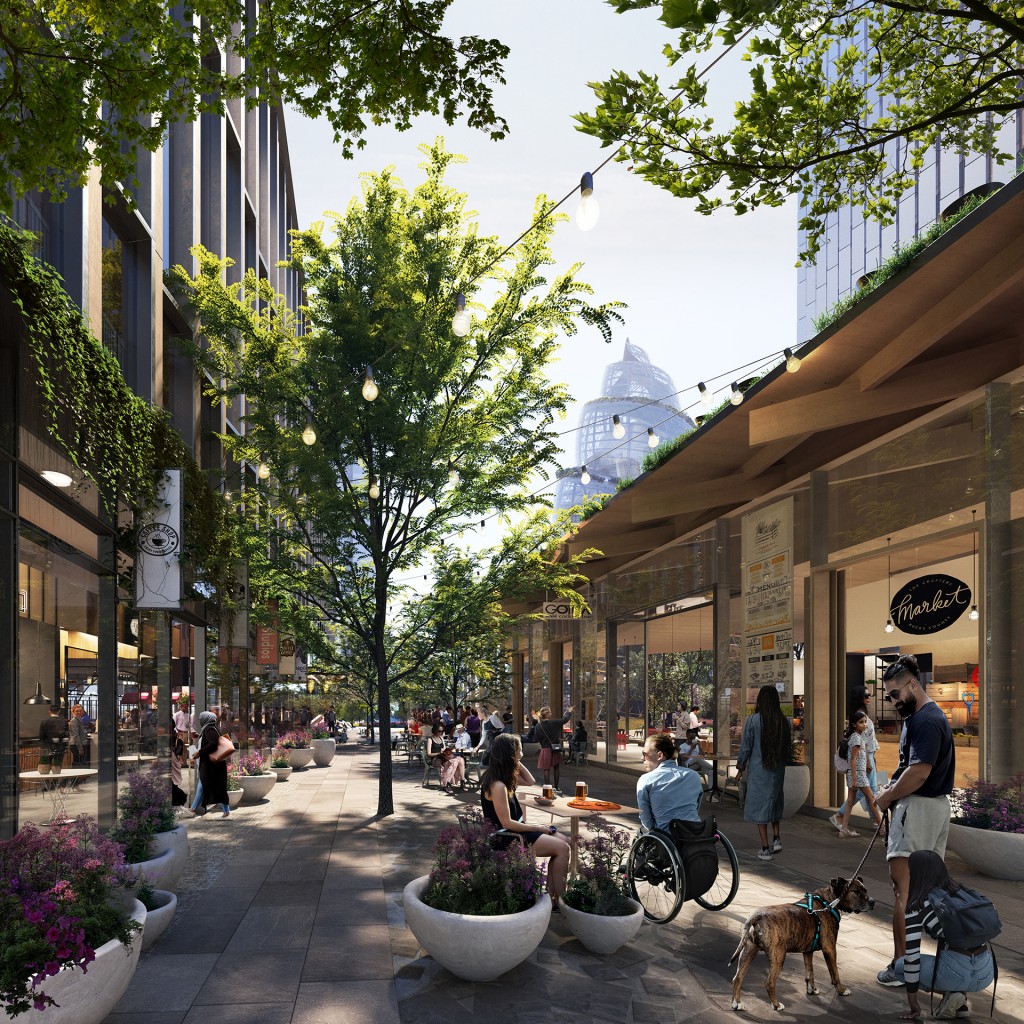 The site also promises a new model in sustainability, with rainwater reclamation and reuse systems, and office buildings that are passively designed (with operable windows!) to harness natural sunlight and breezes for heating and cooling. Both PenPlace and Amazon’s Phase 1 Metropolitan Park will be powered by a centralized electric heating and cooling system that will run completely on renewable energy from a solar farm in southern Virginia, thus helping Arlington meet its ambitious clean energy goals, which put the county on a path to become carbon neutral by 2050. Amazon itself has pledged to be carbon net-zero by 2040. 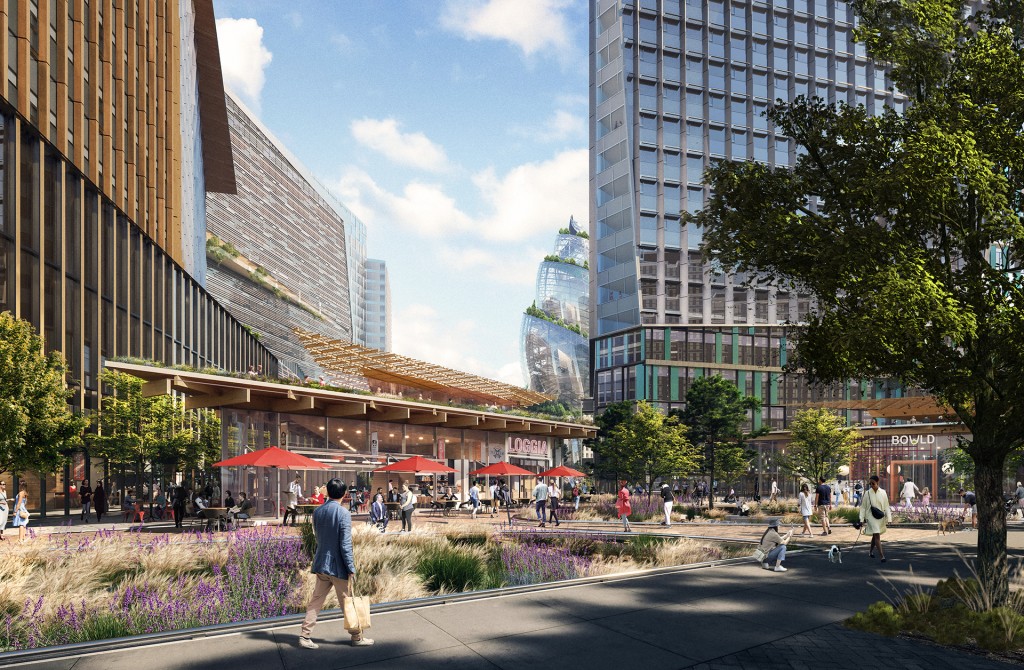 “We’re doubling down on the importance of fostering an open and inviting community by creating a new destination for local residents,” Schoettler says, adding that the sustainability footprint will “advance Arlington and Amazon’s shared commitment to be leaders in the fight against climate change.”

The timeline for PenPlace has public reviews occurring in 2021, with construction likely beginning in 2022 and wrapping up in 2025.