A Beauty Queen at 52

Marta Bota entered her first beauty pageant when most folks are getting their AARP cards. Now she's heading to the national stage. 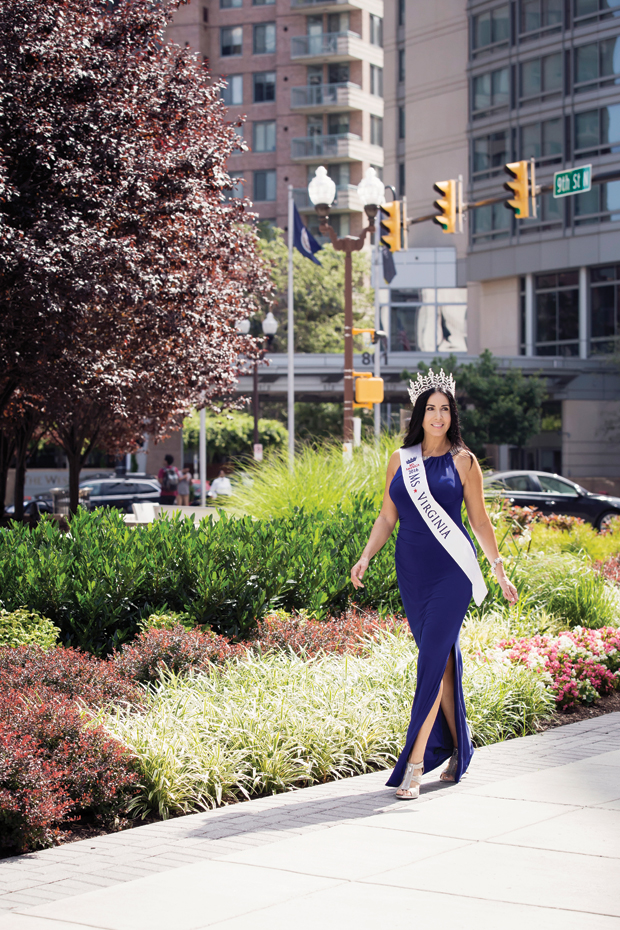 Bota, out and about, in Ballston

It’s 1 p.m. on a Friday and Marta Bota is clad in a black cocktail dress, her posture straight as she cradles her elderly miniature schnauzer, Athena, in her toned arms. Naming the dog after the Greek goddess of wisdom was a calculated ploy, she explains, to sweeten her Greek-American husband, Peter (a co-owner of Metro 29 Diner on Lee Highway), on the idea of getting a puppy.

That was 14 years ago, when their son, Chris, was only 6, Bota says, casually noting the passage of time. Though she was born in Brooklyn, she has lived in Virginia for 25 years—the past three in Arlington. It feels like home.

“I am a Virginian now,” she asserts.

As the reigning Ms. Virginia 2016, she even has the crown and sash to prove it. She’ll be wearing those accessories when she competes in September at the Ms. America pageant in Brea, Calif. (not to be confused with Miss America, which is run by a separate organization and limited to contestants between the ages of 17 and 24).

Bota, who is of Cuban, Italian and Spanish heritage, has always been beautiful. At 13, she was approached by a talent agent in Macy’s Herald Square in New York City. But she turned down most invitations to model in her teens, usually because her father nixed the idea. “He was trying to protect me,” she says.

Nevertheless, the language of appearance has long been part of her lexicon. She spent 19 years as a makeup artist for CNN in New York and D.C., helping guests from Ross Perot to Audrey Hepburn put their best face forward on camera. Today, she still moonlights as a makeup artist.

And yet, Bota insists that it wasn’t a thirst for glamour that finally compelled her to step into the spotlight as a contestant in the 2014 Mrs. DC competition (she snagged third-runner-up). It was the chance at having a microphone. Her chosen cause for that pageant, attention-deficit/hyperactivity disorder (ADHD), was a personal one. She had been diagnosed with it—in what she calls her “aha moment”—only five years earlier, at age 47. Suddenly her life path made more sense.

“I had chosen a career that was creative, and in which I could make my own hours, and where I was in a different environment all the time. In school, I had been in the gifted program but I struggled to focus…[and] had a lot of problems with time management,” she confides, remembering how her sense of self-worth plummeted when teachers and her parents disciplined her for behaviors she could not control.

“The number one side effect of ADHD is low self-esteem,” she says. “You’re constantly getting this message that you are lazy or stupid. ADHD is absolutely not an intelligence issue; it’s an information-processing issue.” In 2014, Bota founded the ADHD Help and Hope Network, a Facebook community and repository of articles about symptoms and treatment, parenting strategies, classroom accommodations and products for people of all ages with ADHD. She has since been named an “ADHD Champion” by Children and Adults With Attention Deficit/Hyperactivity Disorder (CHADD), a national nonprofit education and advocacy group.

Beauty contests aren’t just excuses to amass closets full of fancy dresses, she says. They also provide a soapbox. “You have to be able to show the judges you are making a difference with your platform,” she explains, expressing her genuine admiration for fellow contestants, “so many well-rounded women,” who are equally passionate about topics ranging from eating disorders to bullying.

Now 54, Bota will be one of the older contestants to take the stage during the Ms. America competition, which ranks participants ages 26 and up on articulateness and their ability to rock sportswear and an evening gown. (In her case, the latter is a custom number by D.C.-area designer Katya Avdeev.)

She is unfazed, quickly changing the subject from fashion to her latest mission: blindness prevention.

Once again, it’s personal. Two years ago, Bota underwent selective laser trabeculoplasty, a surgical procedure for glaucoma that involves making tiny holes in the eye to improve its ability to drain. Had her condition been left untreated, she says, a sudden buildup of pressure in the optic nerve could have triggered sudden blindness.

In her current role as Ms. Virginia, she serves as an ambassador for the Foundation Fighting Blindness (FFB), making public speeches and helping to raise funds for research into degenerative retinal disease. Last year she emceed FFB’s Dining in the Dark fundraiser, during which guests were served by vision-impaired servers and challenged to eat a meal blindfolded.

“I went to cut my chicken and it flew off my plate,” she recalls. “It was incredibly humbling to think about having to navigate the world” as a sightless person.

With the Ms. America contest fast approaching, Bota is keeping a disciplined workout schedule and meeting regularly with a pageant coach to review the thousands of potential questions she may be asked onstage.

Does beauty matter in a culture that sometimes seems to prize youthfulness above all else?

To this, she responds without skipping a beat: “As I tell the clients in my [makeup] chair or the teenage girls in my self-esteem workshops, you are being constantly bombarded with images that no one can possibly measure up to—not even the girl in the photograph. Love who you are and embrace who you are, because beauty is not one single ideal.”