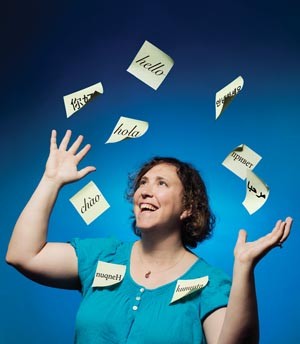 Sandra Alboum is the daughter of a high school Spanish teacher. She remembers her mom speaking Spanish to her dad anytime she wanted to say something in code (for example, that she had made cookies).

Determined to understand her parents’ exchanges, Alboum started looking up the words herself. At 16, she spent her junior year of high school living in Spain. (Her mom had studied abroad in college, and her mom’s roommate had married a Spaniard. Their kids swapped countries for a year.)

“I don’t know if [the other girl] realized what a bad deal that was,” says Alboum, now 38. “I got to go to Madrid and [she] came to Indianapolis.”

Alboum attended American University, intending to become a foreign correspondent for NPR. “I wanted to travel the world and write—and just have a really exciting life,” she recalls. “Then I landed an interview with Bob Edwards…and he was like, ‘Yeah, if you want to eat, that’s probably not a good job.’ ”

An Arlington resident since 1999, Alboum now lives in Arlington’s East Falls Church neighborhood with her husband, Jonathan Alboum (he is the deputy chief information officer at the General Services Administration’s Federal Acquisition Service) and their two kids: David, 7, and Lauren, 3. Her eponymous translation agency is based in Clarendon.

How did you get started as a translator?

I had a whole bunch of jobs that, on paper, were really exciting. But I hated them all.

I was assistant to the ambassador of Spain at the embassy in downtown D.C. for almost two-and-a-half years. Everybody was like, “Ooh, an embassy.” But it’s really just an office job.

You went to graduate school at the Autonomous University of Barcelona. Did you think you would become a translator?

I had no idea, really. I had taken translation classes as an undergrad and I did translation to pay my rent, but I never thought about it as a viable profession.

After the embassy job, I worked at a law firm. My boss called me in and said, “You’re the worst secretary I’ve ever had.” That’s when my husband said to me, “You hate working for people. But you love people. Why don’t you become a translator? It makes you happy.”

I read that you speak Spanish, French, German, Latin, Greek…

Oh, I don’t speak all those. I studied them. I speak enough Hebrew to go to temple. I speak Spanish fluently, and I speak Catalan…which is what they speak in Barcelona.

How many people speak Catalan? Not many, right?

I’ve heard anywhere between 7 million and 13 million. Wikipedia says 11.5 million. It’s kind of like a mix between Spanish and French.

Why concentrate on a language that is spoken by so few?

Wow. What was the preposition?

You got 105 pages on de? What does it mean exactly?

It means “of” or “from,” but it has a whole bunch of other meanings that I analyzed. It was syntax. I was working on the nitty-gritty of the grammatical usage. My father said, “I have three words to describe your thesis. Es-o-teric.”

Tell me about starting your business in 2004.

I started out as a translator, but soon people were saying, “You do Spanish, but do you know someone who can help me with Chinese or Arabic or Russian?” I discovered that I liked project management and pulling the strings. So the business became more of me outsourcing than me doing the work. It’s more profitable too.

I hear you’ve translated for some famous people.

I was hired to interpret for Bill Gates when he was here in D.C. for the End Polio Now initiative—which was a joint initiative with the Barca soccer team out of Barcelona.

As it turns out, I didn’t have to do anything. They put Gates up on the dais with the Barca coach and president—he was sandwiched between the two—and they put me down in the front row. The Barcelona press was there and asked a few questions, but the president of the Barca team ended up leaning over and whispering the translation to him. That was a whole lot smoother and more elegant than me yelling out the interpretation from the front row.

The president of the Catalonian parliament, Ernest Benach. He came to meet with New Jersey Congressman Rush Holt to talk about linguistic matters. But in the meantime, he also got a two-hour tour of the Capitol. I had to dredge up all of my architectural terminology. It’s hard enough to remember the difference between frieze and fresco in English, much less another language.

Why is translation so important in our area?

D.C. is such a global city, with all of the embassies. Everybody’s doing international work here, so it’s a natural fit. I have a very specialized agency. We only serve nonprofits and mission-driven organizations.

I was seeing a business coach, which is sort of like seeing a psychiatrist. I said, “I want to grow my business and I don’t know how.” And she asked, “Who is your clientele now?” I had some mistaken idea that we were working mostly with law firms, but as it turns out, about 70 percent of our business was coming from nonprofits. It made sense to rebrand ourselves as the translation agency for the good guys. That’s the tagline we use.

Do you think a lot of things get lost in translation?

I hate that phrase. It’s on every translation agency’s website. It’s so unoriginal. But the art of translation is a skill, just like anything else. People say, “Hey, the secretary translated this for us—can you check it over?” I say, “No, but I can redo it.” People take coursework in linguistics. They earn Ph.D.s in it. Assuming any Spanish speaker can translate is like saying, “Hey, I have two feet, I can ballroom dance.”

Do you hate online translation tools like BabelFish and Google Translate?

Those types of programs aren’t bad if you just want a general idea of what something says. But I would never use them for professional production. Human translators have a sense of nuance that computers just don’t get.

We had an education client that came to us…a school district that had used Google or something similar to translate their first-day-of-school-type forms. Let’s just say they came out poorly. One box that asked for “race” had been translated into “race” as in a footrace or marathon—not as in Caucasian race. We hear things like that often. Or the computer program may not recognize that a word or phrase is actually part of somebody’s name. For example, Bill Gates might be translated as a restaurant bill and a picket-fence gate.

Are you teaching your children Spanish?

Not really, although yesterday my daughter was saying numbers in Spanish out of the blue. Maybe she will get the bug from me. My husband is no good at languages. He speaks New Jersey.

How many translators do you have working with you?

I’d say we have about 200 freelancers in the database and we use 50 to 60 regularly. We do a lot of work in French, Portuguese, Spanish, Chinese and Arabic. The only language we were never able to field is when I got a call from somebody looking for Klingon.

My dad could have helped you.

It’s funny. I originally thought it was my dad calling…but it was a guy going to a Star Trek convention. He wanted to give a speech in Klingon.

Wendy Kantor is a freelance writer who lives in North Arlington with her husband and two dogs.