Yes, we’re talking about cupcakes. These are the latest surprise ingredients in the mix at Buzz Bakery in Ballston.

The cupcake craze is not over, and if you think you’ve seen every possible flavor combo, think again. Being the grownup that I am, it’s nice to see some non-cloying varieties of this ever-trendy treat on the seasonal menu at Buzz Bakery.

First, let’s talk about the Mexican Radio, which incorporates a mole-inspired stout by the same name from Buzz’s sister establishment, Bluejacket Brewery (both the bakery and the brewery are owned by Neighborhood Restaurant Group). 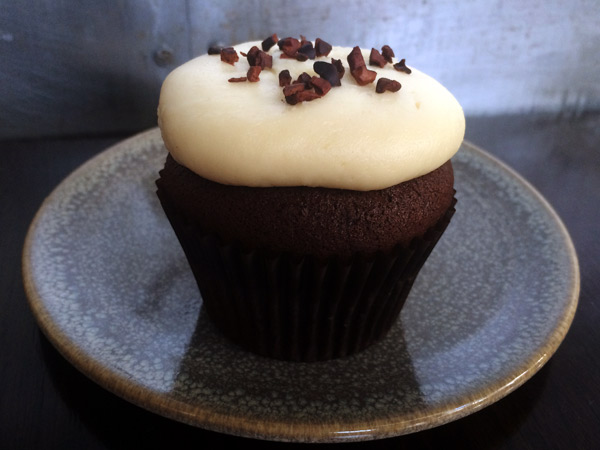 Nostalgia aside—the very name, “Mexican Radio,” transported me back to high school, when a boy I liked made me a mix tape including the eponymous song by Wall of Voodoo—this cake’s got kick. The beer in the batter is a spicy, sweet dark brew featuring ancho chilies, vanilla bean, cacao nibs and cinnamon. It makes for a cupcake that’s deep, intense and not too sweet. 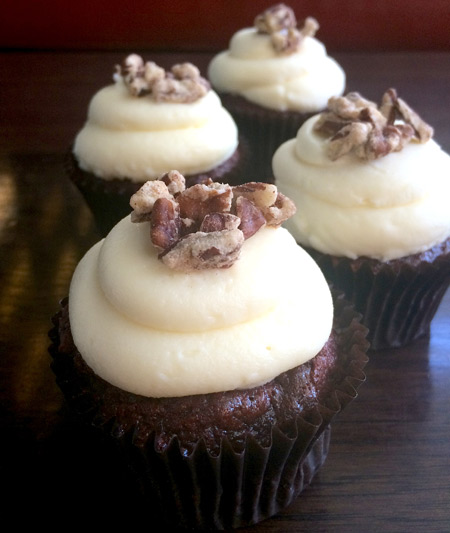 The Spiced Beet Red Velvet, meanwhile, is not just one of those Jessica Seinfeld attempts to hide veggies in the dessert so your kids won’t know they’re eating healthy. Who cares about the kids? I’m digging this pink-tinged spice cake that tastes like classic gingerbread, yet presents the moist, slightly chunky texture of a carrot cake.

Both options are frosted with Buzz’s cream-cheese buttercream. And both are good, albeit acquired tastes. But don’t just take my word for it. I thought it best to poll a few other adults.

“I don’t like beets,” my husband, Jim, disclaimed, before sampling the goods.

“And it smells healthy,” he added skeptically.

In the end, however, he proclaimed the beet-and-cream-cheese pairing to be an intriguing combination of flavors.

The beer cake—which he described as “rich and deep”—made a more lasting impression. Ten minutes after the first bite, he was still tasting it. “This is no wimpy cupcake!”

Later that evening, I presented the options to my book group (it was my month to host). The ladies were eager to give both kinds a try, so we cut them in half and passed them around.

Melanie: “I like the beer one—it’s got a complex flavor. It’s more sophisticated than a regular cupcake.”

Rachel: “But the beet is moist…”

Carol: “I prefer the beet.”

Melanie: “I think the beet is more bland.”

Diane: “I think the beer is more challenging!”

Melanie: “I would buy the beer again.”

Rachel: “For what it’s worth, I’m not liking the beer one.”

There you have it—an even cross section of beet and beer lovers. Which one are you?