Behind the Bar at True Food Kitchen

Mixologist Judy Elahi shares tricks of the trade, drinks that should be outlawed and the song she can't get out of her head. 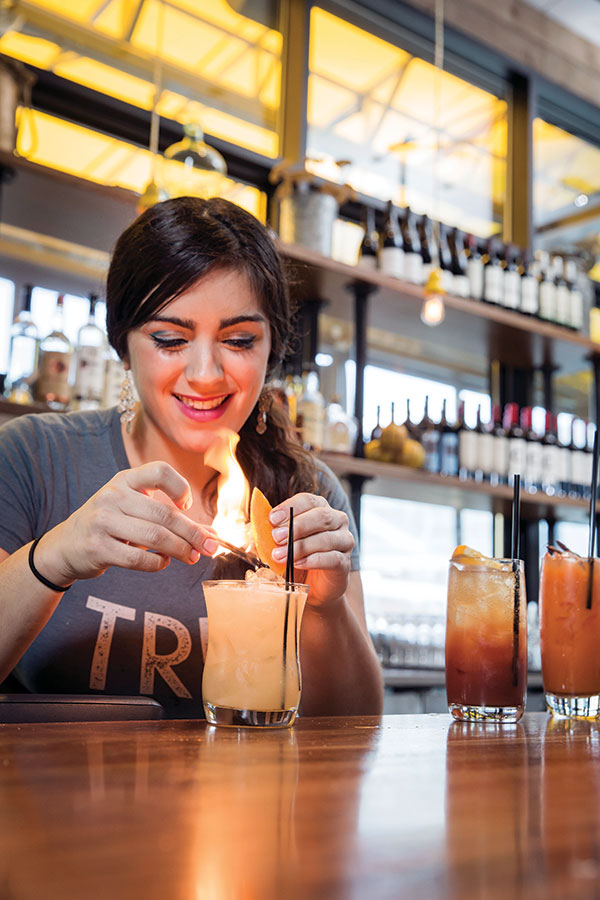 Résumé: Bartender at True Food Kitchen in the Mosaic District and at Ocean Prime in D.C. She’s mixed drinks for more than five years at such places as Cuba Libre, Ted’s Bulletin and Chevys Fresh Mex.

Behind bars: I work most holidays except for Christmas Day and sometimes Christmas Eve. New Year’s Eve is the most fun because everyone’s in high spirits and ready to celebrate.

Perfect cocktail: Something that is balanced; not overly sweet and not overly citrusy. I recently had a beet-gin drink with white pepper, made by the president of the DC Craft Bartenders Guild. I almost fell off the barstool it was so good.

Sixth sense: You can always tell when someone walks in if they’re going to be happy or not happy. They emit a certain type of energy that you can feel. If they’re not happy, they’re more likely to dislike their food or drinks. Still, I try my best.

Fiesta fail: I was working by myself one Cinco de Mayo, and a nice lady kept ordering all different kinds of drinks. She had a White Russian and then a martini and then a margarita and then a beer and a wine, all in about three hours. Toward the end of the night, just as I had cleaned down my section and was about to go home, she threw up all over my bar. She offered me an $80 tip, but I refused.

Moment of Zen: Bartending can be fast-paced and stressful. When I’m making hundreds of drinks a night and can’t find a tool I need, I take a deep breath and for a split second visualize being somewhere else. That little trick usually makes me feel balanced again so I can solve the problem at hand.

Keep it simple: Usually the next day after a big drinking holiday I’ll go to a bar, order something easy that doesn’t take a lot of effort for the bartender to make—a glass of wine or a vodka soda—and just enjoy sitting down. As a bartender, you’re usually on your feet for 14 hours.

Most dreaded order: A frozen anything, because then you have to get the blender and make sure it tastes right. A frozen margarita is tough when you don’t have a machine because it quickly dilutes. Also, I dislike making a cappuccino when I’m in the weeds.

Try me: I work in places that use a lot of fresh ingredients, so no request surprises me. Someone can ask for a celery juice drink and I’ll make it, and I’ll make it delicious. I guess the weirdest mixer we use is nettle oil, an antibacterial, anti-inflammatory oil with a pungent flavor. We put it in a syrup. When it’s mixed with ginger and honey you can’t really taste it.

Late night: After a shift, I go home and pour myself a big, fat glass of Carménère. It’s a red wine, originally from Bordeaux.

Trade secrets: Being a good bartender isn’t just about mixing drinks. It takes speed, knowledge, personality and anticipating guests’ needs. When you’re behind the bar, you’re onstage and perception is reality, so you’ve got to be on your toes—always.

In my fridge: Tons of fermented foods, bitters, vermouth, wine, a lot of veggies and some meat. I also have dragon fruit, which I mix into a margarita.

Go-to song: “Shots” by LMFAO, featuring Lil Jon. It’s a really stupid song, but it pumps me up behind the bar. It’s just a beat that goes on in my head.

Wish I could outlaw: Fireball! It’s like antifreeze to me. There are so many better options for shots and shooters.

Up from the minors: I got started bartending when I was working in a restaurant as a server. I wanted something more challenging, so I kept pushing and pushing. I was already bartending two weeks shy of my 21st birthday. I felt like a total rebel.

Next up: I love bartending, but I really want to move up in the industry, get a nutrition degree and have my own juice bar.