Being a Tattoo Artist 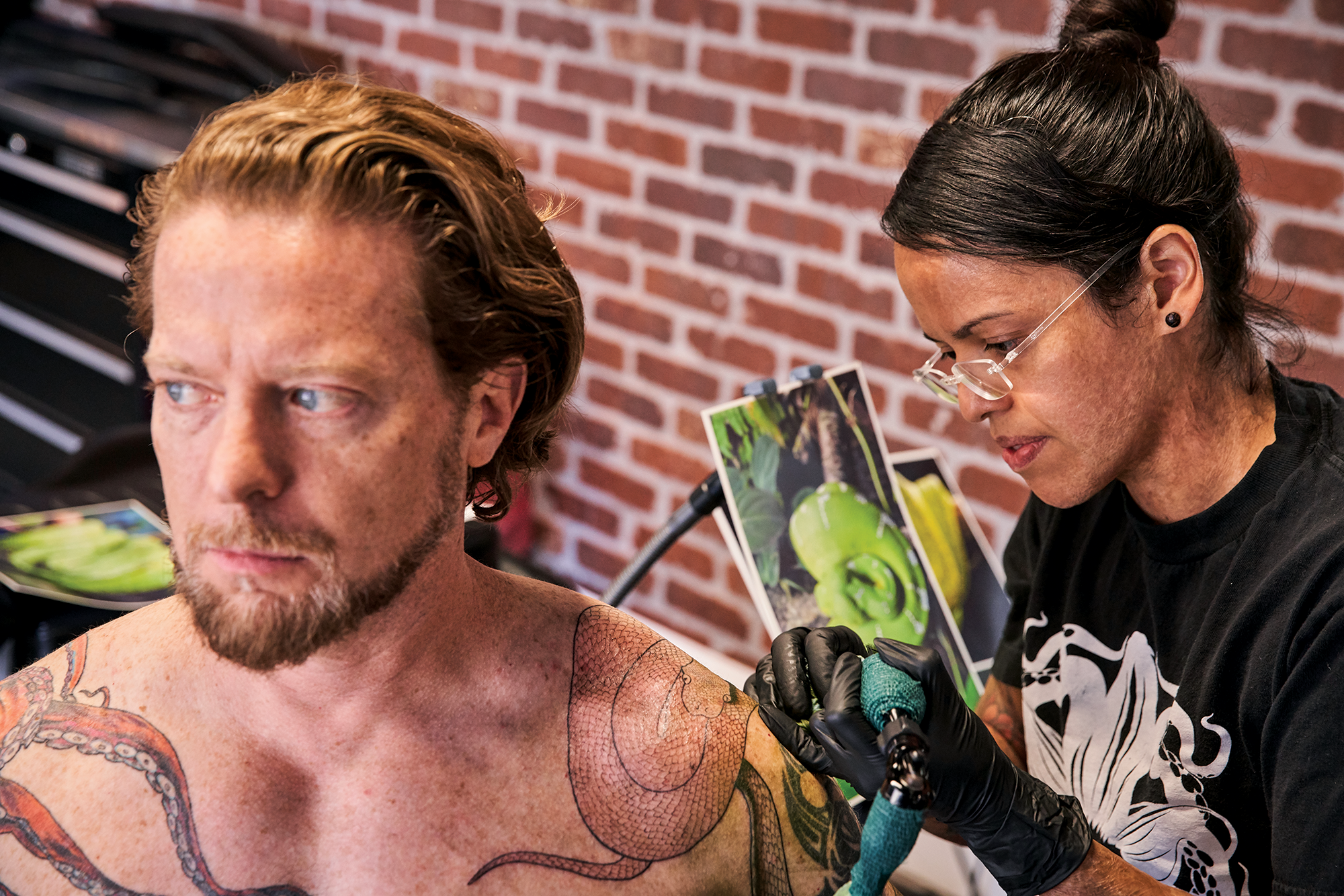 Gilda Acosta with client Richard Shirley, whose tattoos include an octopus and a snake. Photo by Erick Gibson.

Name: Gilda Acosta
Age: 37
Lives In: Arlington Heights, with fiancé Jonathan Reed and their children, Eva and Alex
Raised In: Panama City, Panama
Résumé: Tattoo artist and co-owner (with Reed) of Lady Octopus Tattoos in Clarendon since 2017. Previously worked at Fatty’s Tattoos & Piercings in Dupont Circle. Holds a bachelor of fine arts in graphic design from the Corcoran College of Art + Design. Showed her work earlier this year at the ArtSpace Herndon exhibit Etched in Skin. Recently appointed to the Virginia Board for Barbers and Cosmetology.
Personal Tattoos: Five

Getting Started: I approached a few different artists in 2002 when I wanted to get my first tattoo. It was an ambitiously large piece—a phoenix rising from the ashes—and I eventually chose Fatty’s [in Dupont Circle]. When I handed the artist my drawings, he’s like, “Would you ever consider doing a tattoo apprenticeship?” Four months later, he offered me a position at the reception desk. After about two days of training, I reconsidered the apprenticeship offer and ended up taking it.

About That First Tattoo: It had a lot of meaning. I had survived a burn incident when I was 17, and while hospitalized, I received a letter of acceptance to the Corcoran. I remember coming-to in my room after they had essentially stabilized me. I told my parents, “I’m never taking life for granted ever again, and I’m going to do everything I want in life because it can all go so quickly.”

Early Inspiration: My guess is a video on MTV or something? I saw [a tattoo] when I was maybe 15 or 16.

Lady Octopus: I had a dream about a Pacific octopus and a great white shark. I didn’t actually see the two animals fighting in the dream—I would just see parts of them coming in and out of my line of sight. But the colors were so vivid that I was really inspired to paint it. [One of those paintings is] the original Lady Octopus.

Inking a Deal: Three hours [in the chair] is probably most people’s comfort threshold. We have to work with the client’s pain-tolerance level and also finances. A four-hour session might set you back $700. So if you’re a regular human being, like most of my clients, you’ve got to space that out a little bit—although technically you could get tattooed every two to three weeks on an area that you’ve just tattooed. It takes about that long for it to fully heal, where you can work on it again.

Quickest Tattoo: A set of three freckles that somebody wanted on their arm, maybe 15 seconds.

Longest Tattoo: About 40 hours. That took over a year and a half. It was a tattoo of a robotic arm, overtaken by flowers and vines. It was to represent the notion that nature will always prevail despite human technological advances. The client aspired to become a prosthetics engineer.

What Brings Folks In: I think most often it’s to memorialize milestones, or to crystallize meaning in their lives in a way that’s visible and tangible. But also I think as catharsis—to let emotions sort of take their own shape. Ultimately all tattoos are decorative.

Regrets and Removal: I don’t think people took it as a serious art form for a very long time. That has changed greatly in the last decade or so. Luckily [for] folks who didn’t make the best choice initially, it’s now a lot more accessible to pay for removal.

Alternative Career: Probably a marine biologist, or some sort of anatomical or botanical illustrator, or just an illustrator, period.