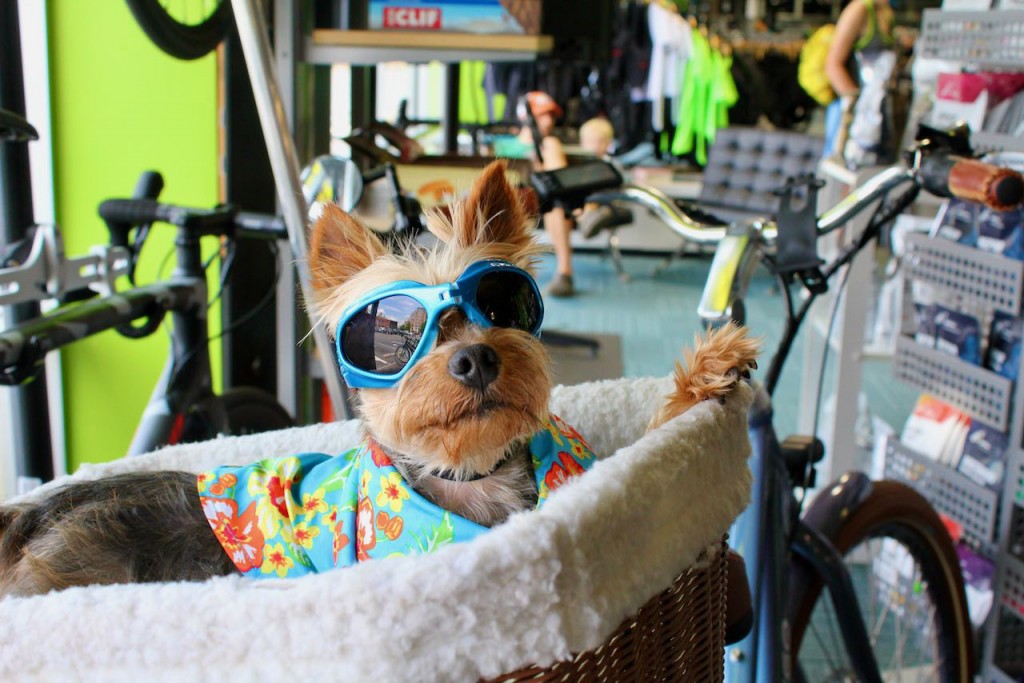 A passenger along for the ride at Spokes Etc. in Ballston

Pandemic economics haven’t been all bad—certainly not for bike shops, which have seen an avalanche of demand for cycling gear and equipment. In April, nationwide sales of bikes, helmets and other accessories were up 75% over the year prior, according to The NPD Group, a market research company. “We saw an unprecedented demand for the product we carry,” confirms Steve Beheler, operations manager for Spokes Etc. in Ballston, which, as of early April, had a waiting list of interested bike buyers. The frenzy caused a backup in Spokes’ repair shop, too. “If you had a bike in the garage you hadn’t pedaled in a few years, you suddenly had a reason to bring it in and see if it was safe to ride,” he adds. Still looking for a new ride? Most Spokes stores (all six are in Northern Virginia) now have 300 to 400 models in stock, including mountain, hybrid and road bikes, as well as kids’ bikes and electric bikes. For serious road warriors, the shop will even build a custom bike with exacting specifications, components and fit. Beheler believes the cycling craze is here to stay. “Bikes allow people to socially distance safely and get healthy,” he says, “and they are also great for the environment and the climate.” –Lisa Rabasca Roepe 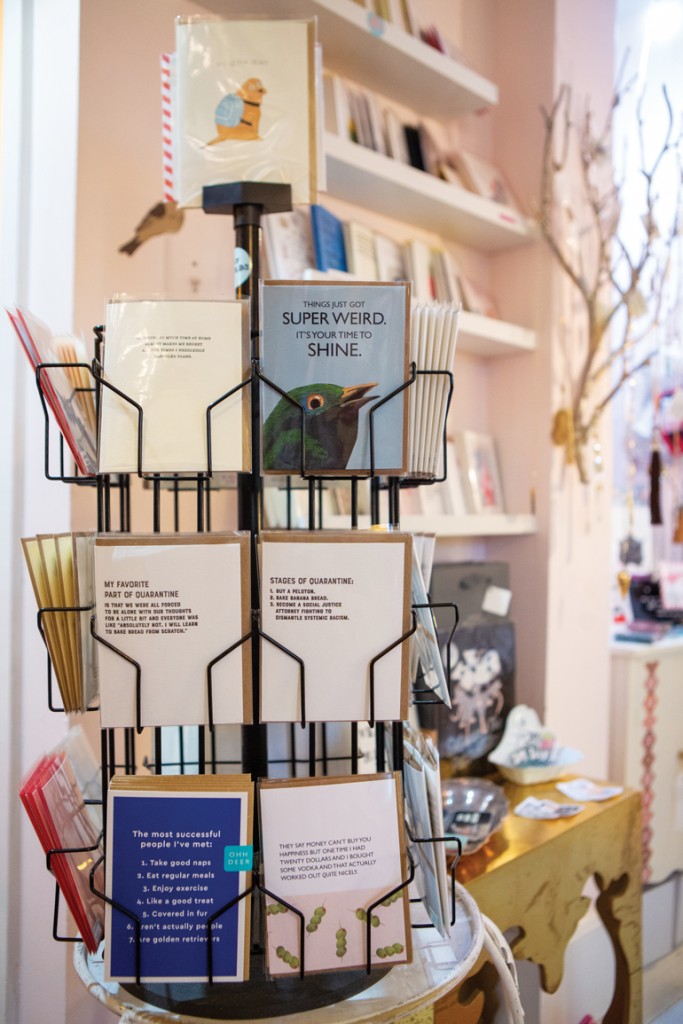 You want to let your bestie or your better half know how much you care—but not in the saccharine-sweet way of your average grocery store card. Autumn Clayton’s edgy Bluemont boutique, occupying the upper floor of an old farmhouse, can hook you up. Attitude is part of the draw here, where greetings by makers such as Sapling Press, The Mincing Mockingbird, FineAss Lines, Colette Paperie and Arlington’s own Little Goat Paper Co. skip the cute baby animals and are more apt to feature Richard Simmons, Lizzo, sloths, dumpster fires, gallows humor and the occasional splash of profanity. Because nothing says love like a heartfelt and well-delivered F-bomb. –Jenny Sullivan 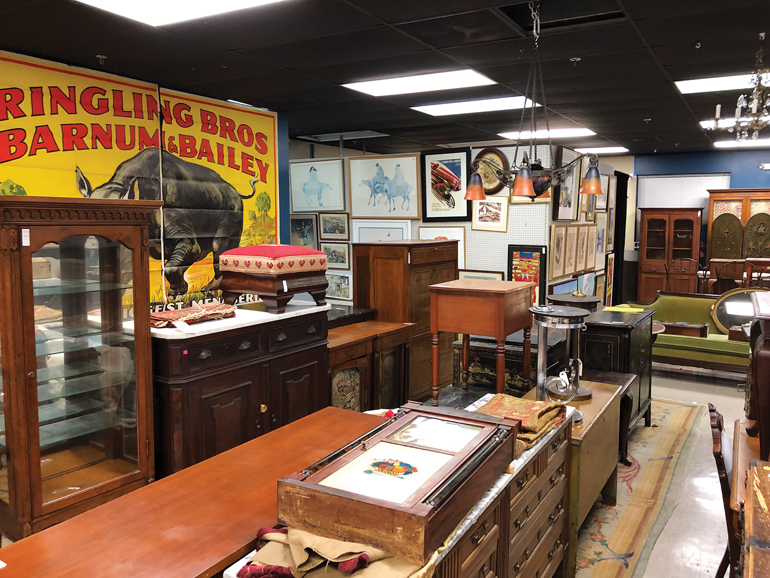 It’s a buyers’ market for vintage finds, says Matt Quinn, executive vice president of Quinn’s Auction Galleries in Falls Church. And with public health concerns driving the bidding process online, it’s easier than ever for auctioneers to play matchmaker, connecting folks with similar passions for, say, rare books or chinoiserie. “Baby boomers and their parents collected items with a greater density than people do today, so there’s a lot of material out there,” says the local dealer, whose family business now stages an online auction every Wednesday. (The sales team also does in-home sales, and Matt’s father, Paul, owns the Falls Church Antique Annex a few blocks away.) If you’ve never participated in an auction, now’s a good time to try, he says. “The key is understanding what you’re bidding on and what you want to pay for it.” Online tools allow would-be buyers to set their top bid and then wait to see if theirs is the highest—minus the intimidating verbal acrobatics of a fast-talking broker. Quinn suggests starting out small with a $15 bid to see how it works. “You’re able to buy things and decorate your home for a fraction of what other people have originally spent on the item,” he says. “If you’re willing to do the treasure hunt, you will benefit from all that buying power.” –Lisa Rabasca Roepe 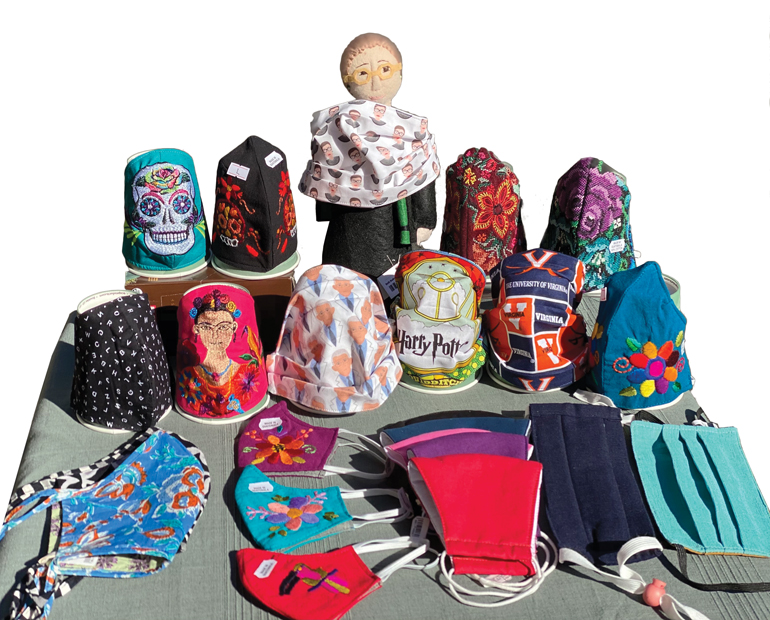 Sadly, it looks like we’ll be wearing face masks for a little while longer. The silver (organic cotton?) lining is that these essential accessories offer new and creative ways to express yourself, and Lisa Ostroff’s Westover boutique has quite the selection. Known for its fair-trade wares, the shop carries masks (both adult and kid sizes) featuring Kenyan kitenge cloth, Guatemalan embroidery and reversible block-prints from India. Alternately, you can state your allegiance to Anthony Fauci, RBG, UVA, GMU or Virginia Tech with a handmade number by local seamster Sandy Tevelin. While you’re at it, grab some calming citrus hand sanitizer made by Virginia-based VC Naturalz, a minority-owned hemp company based in Manassas. –Jenny Sullivan 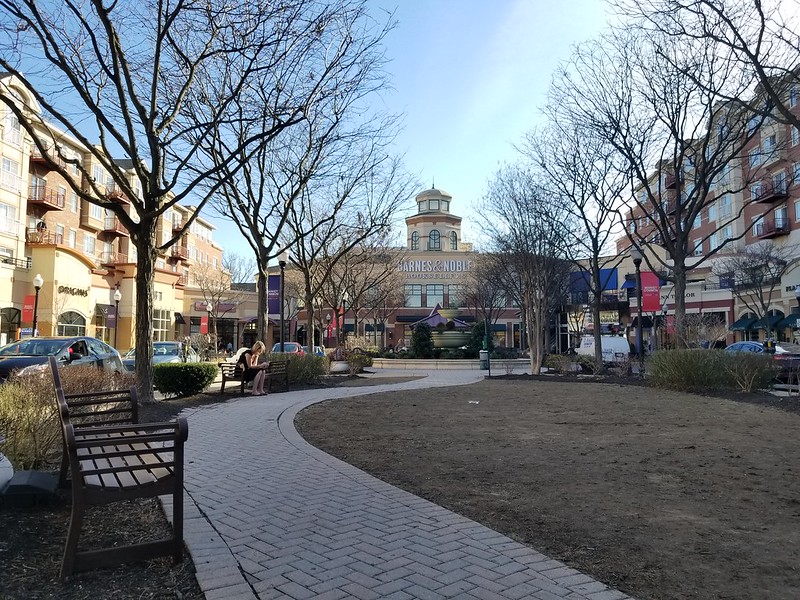 Market Common Clarendon. Photo by Beyond DC on Flickr 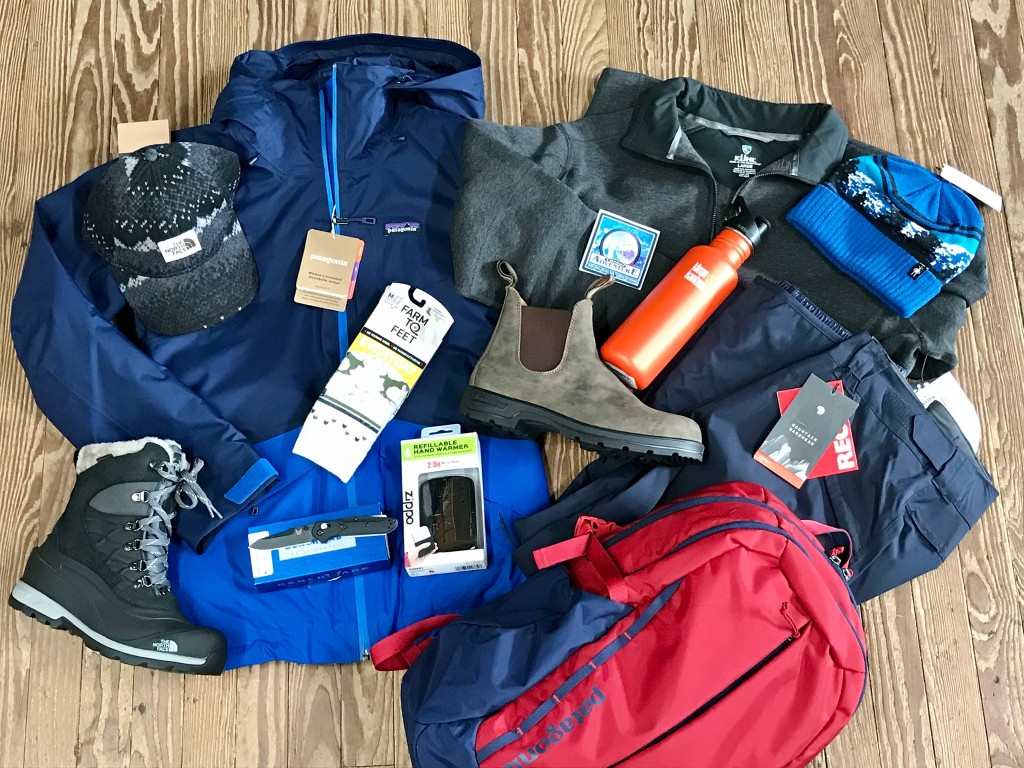 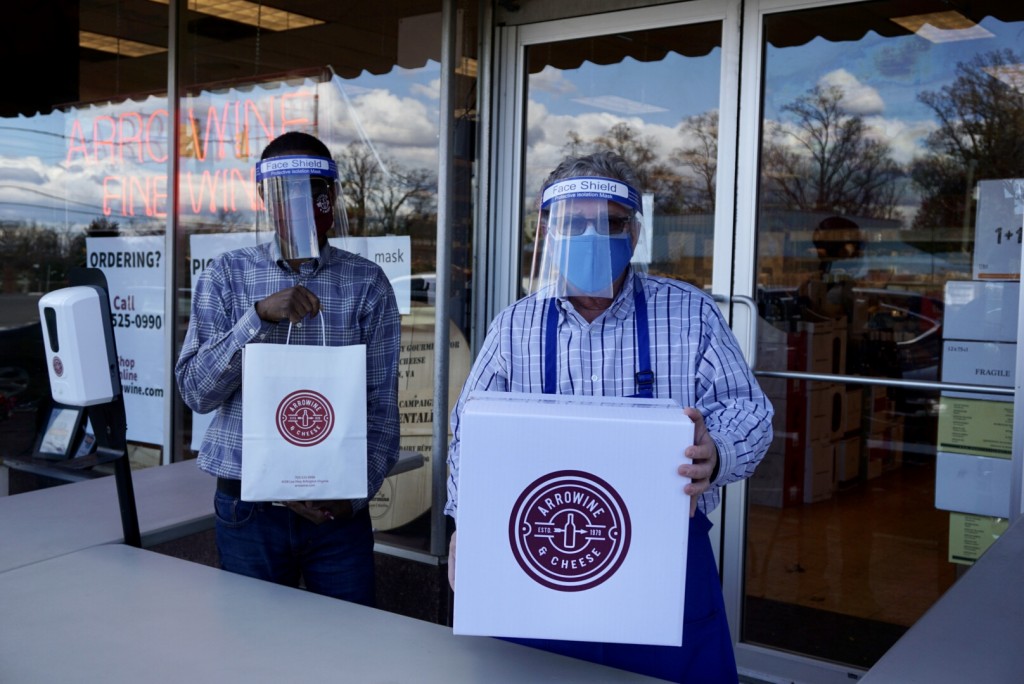 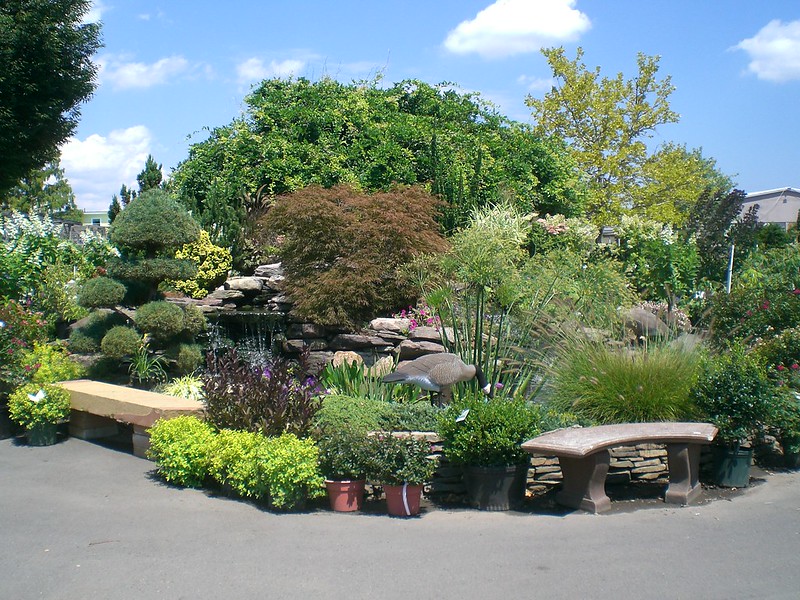 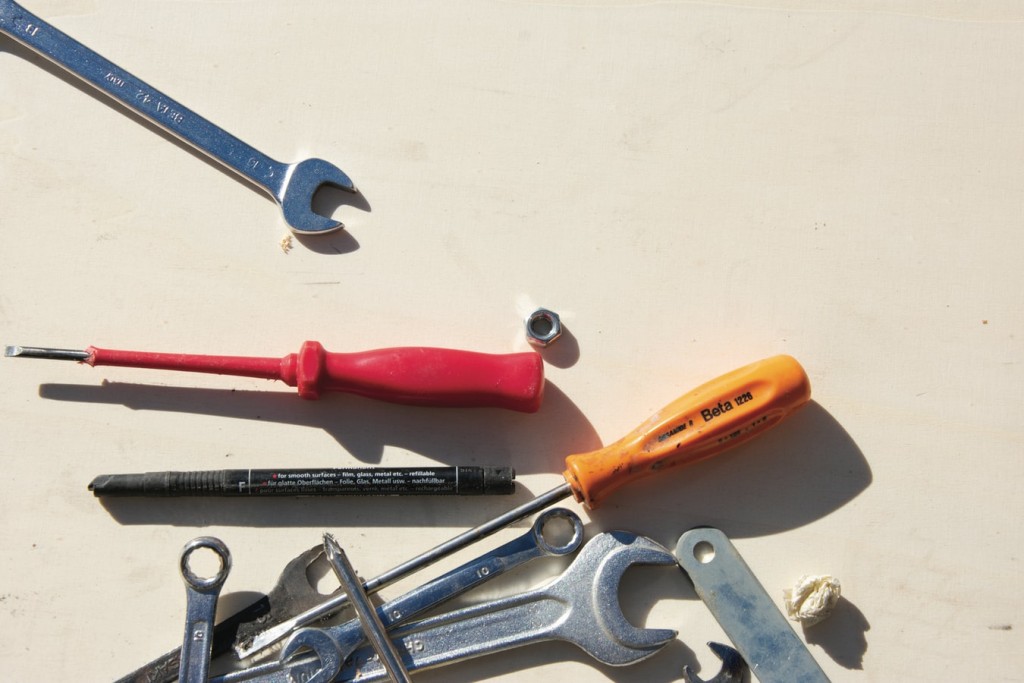