I first discovered Capon accidentally while driving home from Thomas, West Virginia, about a decade ago. I’d expected to be on the highway, but my GPS sent me through the middle of the property and onto a dirt road. The same thing happened again several years later, but by then Paula had introduced me to Alice, whom she’d met playing bridge in the ’90s. Alice, a Holocaust survivor from Czechoslovakia who now lives in Bethesda, happened to mention her family vacations there. She invited Paula and me to join her on a future visit, and we made plans to go during the Masters’ family reunion week last August.

When I called Alice, 93, to relay our dates, she said she was worried that Paula—a seasoned traveler, but more a Kennedy Center than campfire kind of gal—would feel out of place amid Capon’s informality. When I picked up Paula for our getaway, she looked put together, as always, wearing a cashmere sweater with gold buttons and carrying an ankle-length raincoat. We’d never traveled together, but when she offered me snacks 20 minutes into a 90-minute drive (a rice cake followed by “a cookie as a chaser”), I cast aside any concerns about compatibility. 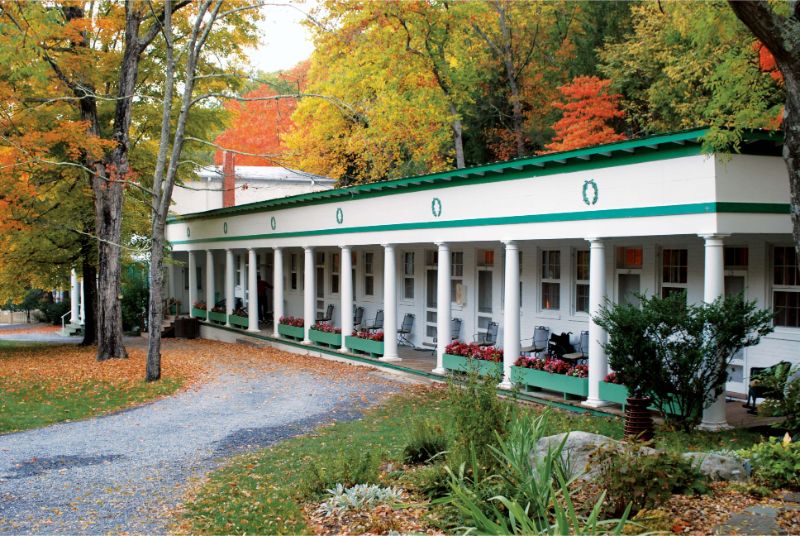 We pulled up to the main house and found Alice on the porch. She introduced us to her family and escorted us around the lobby (where guests had signed up for a Ping-Pong tournament, talent show and daily flag-raising duty) and the library, which included a section of titles authored by Capon guests.

The center of Capon is a wide lawn with a fountain, hammocks and swings. As I walked across the grass from my room to the meeting house—the one place with internet access—kids ran around in packs as though in their backyard. Other children squealed as they played in the pool. I quickly answered a few work emails in the common area, plugged in my laptop to charge there and walked away from it, feeling oddly unpanicked.

Dinner was served at a hilltop pavilion on the golf course. Paula and I found Alice and her family at a picnic table, but before I could sit, Alice took my arm and led me to a grassy area where families were playing Frisbee.

“So, you see, this is how it goes,” she said. She pointed to the mountains in the distance. “Lazy evenings. The world is completely shut out. Isn’t it beautiful?”

We filled our melamine picnic plates with corn on the cob, three-bean salad, peas with pearl onions, and chicken. Alice and her daughters took turns recounting Capon tales from yesteryears: the days when somebody went around with a flashlight to make sure everyone was adhering to curfew (no Dirty Dancing here); the time a guest’s necktie was cut because he was overdressed at dinner; and the era when chicken livers were on the weekly menu. Alice said when she first visited 65 years ago, with a baby in her arms, Capon looked exactly the same.

“I was a refugee,” she said. “I didn’t have a home to go to for the holidays. You go to your parents’ for vacation. My parents died in a concentration camp.”

Friends came up to Alice throughout dinner. “She’s the matriarch,” said a thin woman wearing turquoise head to toe. Alice introduced me to Ben, a lanky man from Raleigh, North Carolina, with a warm smile and uneasy gait. He and his wife have been coming to Capon for 35 years; now they visit with kids and grandkids. When someone talked about evening music, I mentioned that I’d packed my ukulele. Without hesitating, Ben invited me to join him the following night for a sing-along.

Early the next morning I went for a 6-mile walk—off the property and down a hilly road, under a canopy of trees. Other than walks and hikes, guests generally don’t leave the resort—nor is there anything nearby that would lure them away from the Capon charm. When I returned, I was warm enough to brave the spring-fed pool.

In the 1920s, Capon Springs Water was sold up and down the East Coast, said to cure stomach, liver and kidney disorders, high blood pressure and gallstones. It’s been off the market since the 1950s, but the 65-degree water still flows from the resort’s water fountains, taps and showers—and fills the pool (which ranges from 55 to 75 degrees, depending on the air temperature).

Bellingham, a long-distance runner who concludes his workouts with a dip, said it’s rejuvenating. “Warm up in a hot shower, then jump in and move around,” he said. I splashed in, moved my arms like crazy and eventually caught my breath. The water was splendid.