Once she was a hacker for the U.S. government. Now she's one of the D.C. area's hottest deejays. 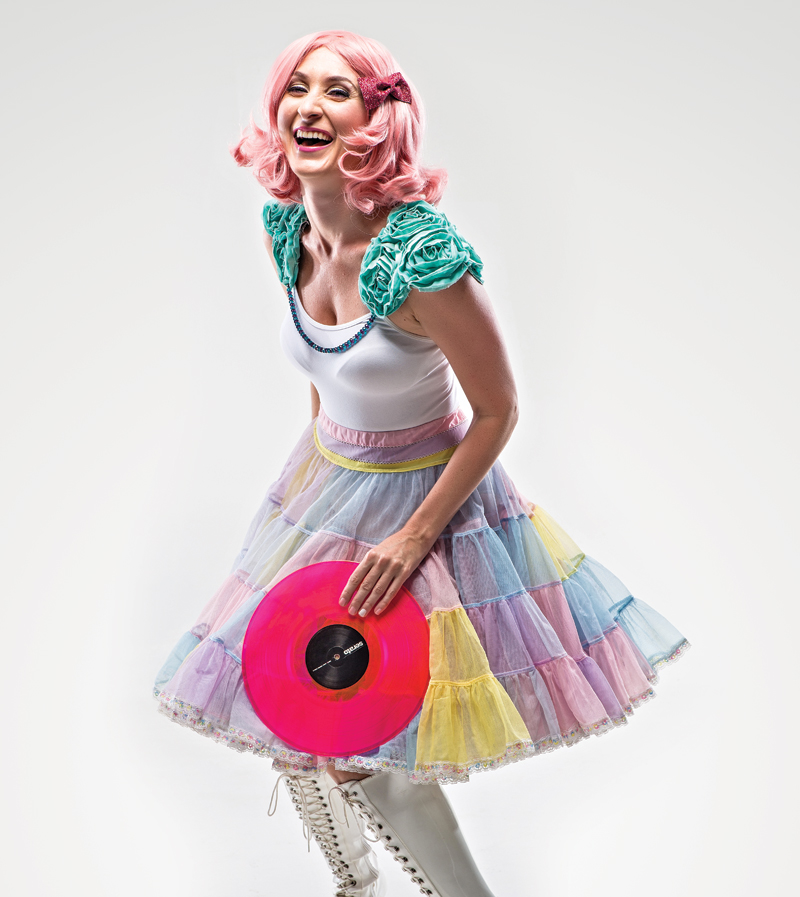 It’s 10:30 on a brisk Sunday morning and the waitstaff at Teddy & the Bully Bar in the District are preparing for the brunch rush. Servers in blue ties and pressed black shirts set down glasses and arrange silverware. The omelet station is decked out with all the fixings. Over at the hostess stand, a reservation book is wide open and ready for business. It’s show time. Almost.

But for one final cue: Not a single egg will crack and no pancake will be flipped until the maestro in the B-52’s-ish pink wig and Wilma-sized pearl necklace adjusts her headphones, opens her laptop and hits play.

“I’m going to start out kind of chill,” says Pentagon City resident Nicole Gallub, who is better known on the club scene as “DJ Neekola.” In this role, she’s at the sound board roughly four times a week (including one recent blowout party for Uber), pulling songs from a 23,000-track playlist that includes everything from oldies to Top 40 to electronica. She says she generally avoids tunes with negative messages or bad language (citing Kanye’s “Famous” as an example) but mostly goes with the flow, “feeling the vibe in the room.”

Right now the vibe is disco. Gallub, who coyly admits to being “somewhere” in her 30s, taps the control buttons with a silver-polished fingernail and fires up a remix of the Bee Gees’ “Stayin’ Alive.”
Her hands are always moving, fiddling with knobs, dialing up the sound. She even manages to keep the beat while simultaneously calling a friend with a cellphone on which her stage name is bedazzled, courtesy of her Aunt Grace, in rhinestones.

Whatever she’s playing is working. By noon, a table of 13—including two babies—is happily eating their fried chicken and waffles to the whip-and-nae-nae groove of Silento’s “Watch Me.” Toward the end of her four-hour gig, general manager Eric Gonzalez wanders over. “You can never go wrong with Soul II Soul,” he tells her.

“She’s my first call without a doubt,” gushes Tommy McFly, the perpetually chipper host of The Tommy Show on Fresh 94.7 FM. He’s tapped her to play at the Best Buddies’ annual Prom, worked alongside her at Restaurant Association Metropolitan Washington’s annual RAMMY Awards, and most recently recruited her to spin tunes at the Crystal Couture fashion extravaganza in Crystal City.

During the latter event, McFly emceed the proceedings while Gallub set the mood for 16 different runway shows (featuring 16 different designers) over the course of four hours.

“She creates that all in her head and at her fingertips,” McFly says, sounding marveled. “When you work in the entertainment business, there are a lot of egos. But not with Nicole. There is absolutely no drama with her.”

Gallub, who is seemingly without guile and never without a smile, credits her temperament to the lessons she absorbed as a child. Her father, a mailman, and mother, a rock musician who played with the likes of Journey and the Red Hot Chili Peppers, divorced when she was 2 years old. When she was 9, her father moved with her from Long Island to Richmond.

“I was picked on as a kid,” she says. “My dad didn’t know how to raise a little girl. I had a mullet and mismatched clothes and was really geeky because I liked computers.”

In retrospect, Gallub says, those vulnerable years were constructive. “I learned to always be humble and always be sensitive to others because it hurts when people talk about you. It doesn’t feel good.”
It’s why, she says, she doesn’t have a single enemy. Although that backstory does make it difficult to imagine the kindhearted, friendly Gallub playing a subversive role—which is precisely what she did in her first professional job as a government-contracted computer hacker.

What wasn’t fun was playing by the government’s handbook. “There were too many rules and too many approvals to get,” she says. “A hacker doesn’t think like that. A hacker is going to keep trying to get in. He’s not going to follow the rules and wait for approval.”

Gallub went on to install new computer systems in the American Embassy in Buenos Aires as a contractor for the Pentagon. But in 2012 she decided to leave “the real world” and pursue something she had been doing on the side since college. In 2005, she had spent two weeks at New York City’s Scratch DJ Academy (founded by Jam Master Jay of Run DMC) learning how to mix, sample and use her computer for another purpose. Her first gig was a Christmas party thrown by some friends in Richmond.

Eleven years later, in an industry dominated by men, she is one of the few women—two, according to her—working as a club deejay in the DMV.

It’s a point of pride, to be sure, but she’s restless again and ready to make her next move. This time, she’s set her sights on another competitive industry, one that’s already crowded with a notoriously tough crowd. Gallub is co-founder and “Logistics Queen” of a startup called Pelonkey, a digital booking agency that matches talent—deejays, photographers and even, as pictured on the company website, a knife-juggling little person—with event planners.

Her partner and co-founder in the new venture is her sister and roommate Ciera, 26, who has long served as DJ Neekola’s booking manager, and now holds the title of “Operations Unicorn” at Pelonkey. In that role, Ciera brings in new business and puts out fires, all while looking like a Disney princess with ivory skin and handfuls of long, shiny hair.

The two get along uncommonly well. Recent “sister dates” have taken them to the movies (naturally, they saw the movie “Sisters”) and on a massive thrift-store shopping spree to outfit Gallub’s artistic alter ego, whom they both describe in the third person.

When she’s not wearing her trademark wig, Gallub has tumbling locks in varying shades of blonde and looks like any young professional on a lunch break. In fact, she is hoping to hang it up and make the transition from deejay to full-time CEO of Pelonkey. The sisters are currently seeking angel investors, trying to raise $750,000 by fall.
But for now Gallub’s signature cotton-candy coif will stay put.

After all, asks Ciera, “Who could refuse someone in a pink wig?”

Cathy Alter’s stories for Arlington Magazine have covered topics ranging from art auctions to malaria. Her latest book, Crush: Writers Reflect on Love, Longing and the Lasting Power of Their First Celebrity Crush, is now in stores.