Bonding With My Daughter Over History and Headstones

What started as a public service project became something more personal and more poignant. 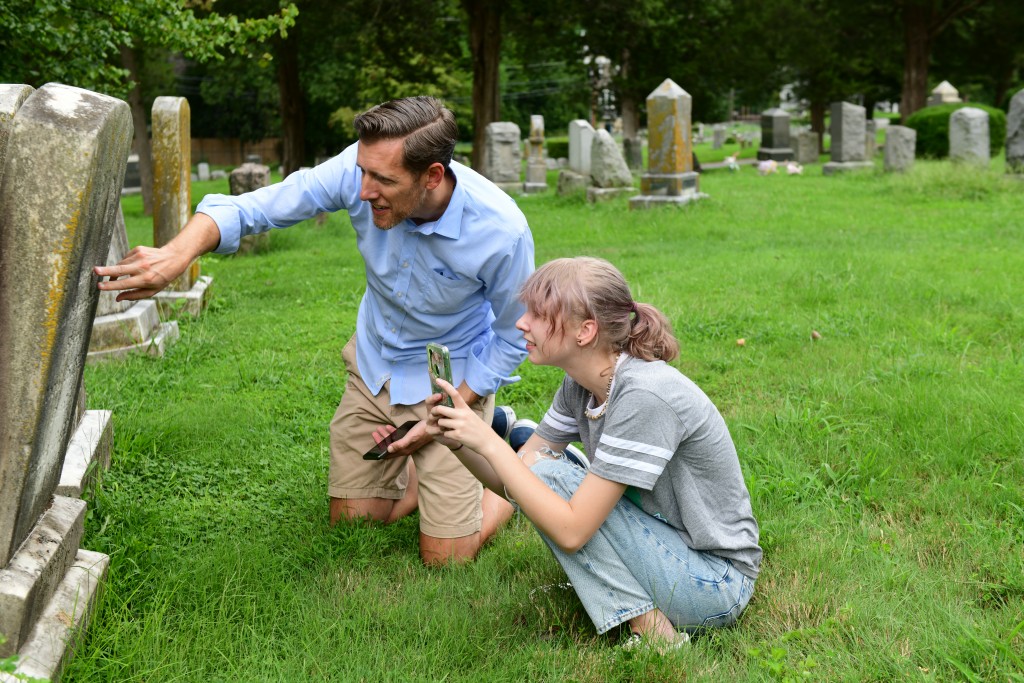 The author and his daughter documenting gravestones at Oakwood Cemetery in Falls Church. Photo by Michael Ventura.

I knelt to examine the weathered gravestone, scraping away moss and tilting myself sideways like a human Tower of Pisa to read its inscription.

Squinting, leaning back, then leaning forward again, I traced my fingers against the faint edges of the 19th-century engravings. “In memory of D…? R…?” I called out to my 16-year-old daughter: “Hey, Sarah, I need your help again!”

We were taking pictures of gravestones at a modest roadside cemetery not far from Mount Vernon, and I needed her younger, keener eyes to decipher the shallow marks from two centuries earlier.

Why were we documenting headstones, you may wonder? A few weeks earlier, a lady in our church had challenged the congregation to do more community service, so I decided to look for some local projects on the JustServe app. Scrolling through the listings, I saw several references to BillionGraves. I clicked on one of the links and soon discovered a world of little-known cemeteries and the thousands of volunteers around the globe intent on photographing every headstone in them.

BillionGraves is just what it sounds like—a free, searchable online database of millions (not a billion yet!) of headstone photos and transcribed information from those grave markers. Using the app, anybody with a smartphone can document headstones, record the names and dates of their departed subjects, then upload those images to the database.

As with so many hobbies, the digital age has transformed genealogy and family history research. Previously, if you wanted reliable information about your ancestors, you had to trek out to their final resting places—perhaps in another country—to confirm birth, marriage and death dates.

Now, from the comfort of your living room, you can enter the name of a distant relative into any number of databases and find photos of that person’s headstone in less than a minute. What a remarkable thing. I decided documenting some burial sites and contributing to that cause could be my community service.

You’d be surprised at what a teenager will say yes to. I doubt taking pictures of tombs was at the top of her list, but when I asked Sarah on a sunny Sunday afternoon if she would come with me, she agreed. Any excuse to use her phone is a bonus—we held out on giving her one until halfway through her junior year at Washington-Liberty—so that, combined with the fact that she had nothing better to do, and maybe with hopes of getting one of her custom, six-flavor, mixed Slurpees on the way home, prompted an okay.

We drove down the scenic George Washington Parkway listening to Dad’s favorite alternative ’80s music, then turned off into one of the neighborhoods and found the small graveyard we’d identified on the app.
We’ve all been in cemeteries—maybe, as teenagers, scaring ourselves and friends, and more likely since then, as mourners clustered around a coffin, paying our respects to the dead. But this outing cast the setting in a new light.

If you walk around long enough, you are bound to find a person with your same birthdate, which gave me pause. You also invariably come upon the graves of children and teenagers—wrenching ones like “1922-1923, Emily, our darling baby girl.” You think about those parents and grieve a little with them, even 100 years later.

A teenager with a phone makes an adult with the same device look like a baseball rookie facing a Max Scherzer (speaking of the dearly departed—from D.C., at least) fastball. Sarah documented row after row of headstones in short order, expertly photographing the markers and transcribing them two or three times faster than I ever could. My excuse was that my section had older graves that took longer to decipher, but after an hour she had captured nearly three times more photos than I had, and already transcribed and uploaded them all. It took me more than a week to transcribe mine.

Heading home, we got to talking about the people we saw on the gravestones: soldiers, husbands and wives, the old Reverend Jamison and his wife from the 1800s. We talked about what we’d want our own headstones to say. And would you believe she came to me a week later and asked if we could do it again?

Research suggests that children with a strong “family narrative” enjoy better emotional health. “The more children knew about their family’s history, the stronger their sense of control over their lives, the higher their self-esteem and the more successfully they believed their families functioned,” writes Bruce Feiler, author of The Secrets of Happy Families. “[It] turned out to be the best single predictor of children’s emotional health and happiness.”

I believe there is truth to this. At bedtime, when she was little, Sarah would frequently ask for a story about my family, or—her favorite topic—“Tell me about another time when Uncle Doug [my youngest brother] was bad.” Sorry, Doug.

You take your good memories when and where you can. It’s bedtime stories when they are little, and maybe it is visiting cemeteries when they’re older.

Someday my name will be on one of those stones. I’ve already decided nothing too fancy—just a few inches high so the weeds won’t cover the edges, and a very deep engraving that won’t fade for a long time. My memories will be buried with me and slowly forgotten as time passes, until I’m not much more than a name and some dates.

Sarah’s adult future is coming fast, but I’ve still got a little bit of her childhood left. I will remember these afternoons with my daughter as long as I’m alive. Perhaps once I’m under a stone, she’ll remember our outings and tell her grandkids about them.

I like to imagine the little great-great-grandkids that I will never meet, knowing the story and pleading at bedtime: “Tell us again about Grammy Sarah, when she was a little girl. Did she really go with her daddy and take pictures of gravestones?”

Jeffrey Yeates was born in Alexandria, not far from the cemetery in this essay. He works for the federal government and has lived in the Arlington Mill neighborhood since 2001. He and his family enjoy cycling and Virginia history. jeffyeates@gmail.com

→Historic Cemeteries to Visit in the DMV