Proceeds from each event at Gypsy Soul in the Mosaic District support the World Police & Fire Games.

So I didn’t even know there was a World Police & Fire Games until chef R.J. Cooper started cooking some chili. And of course, that was the whole point.

“We wanted to spark awareness in the D.C. area that these games are coming,” Cooper says. “And what better way to raise awareness—and money—than with chili?”

Each Monday this month, Cooper is hosting a chili cook-off at lunch and dinner at his Gypsy Soul restaurant in the Mosaic District. For $10, you get two bowls of chili and a ballot. One of the tasting options is made by Cooper; the other is whipped up by Fairfax County firefighters.

If the firefighter wins, all of that day’s chili earnings go to his or her firehouse to help raise funds for the games. If Cooper wins, the firehouse gets 50 percent of the take.

And the tally so far? The winner of the first cook-off on March 2 (for classic red chili): Deputy Chief Anthony Barrero of Fire Station 40, and Fairfax County’s chief of fire prevention. 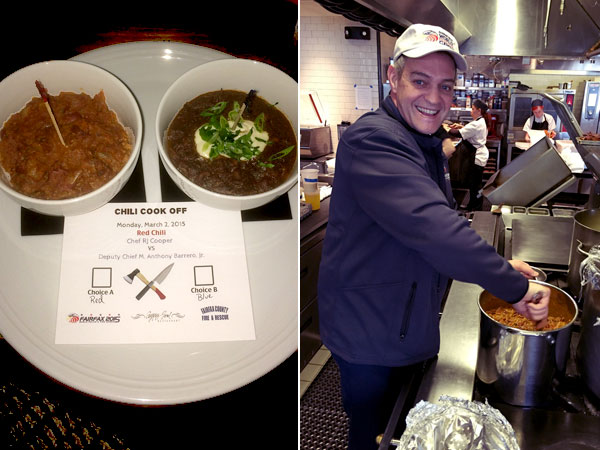 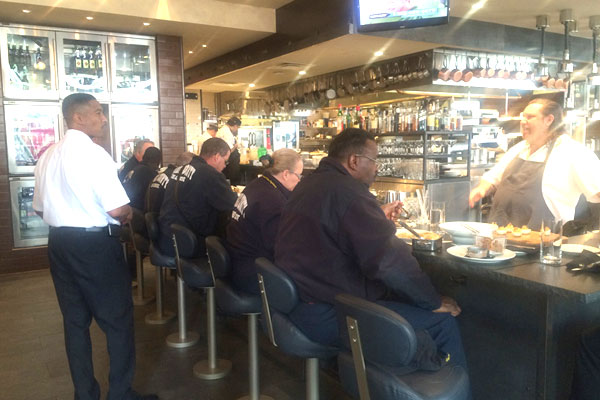 The trash talk is ON. Cooper (behind the counter) claims that Barrero won that round because he stacked the deck with all his firefighter friends.

In Round 2 last week, Cooper bested Captain John Niemiec of Fire Station 42, taking the prize for his chili verde.

Here’s what’s up the rest of the month:

“Chili is one of the staples in firehouses. They can make a lot of it, and it’s filling—one-pot cooking for them is a miracle,” Cooper says.

Of course, one-pot cooking for a restaurant that deals in larger quantities is an entirely different animal. And Cooper won’t let them forget it.

“They were making little pots of chili like they do in their firehouse—we had to bail them out with a second batch!” he says. “The firefighters come to rescue us when we have an emergency, and we rescue them when there’s not enough chili.”

All kidding aside, Cooper says the turnout has been energetic and plentiful. He’s planning more cook-off fundraisers leading up to the games, which take place in Fairfax June 26-July 5.

What’s in store? “Ribs—we’re talking about all kinds of crazy stuff.”

Meatballs, too. I think I’ll need to start training for the games just to handle the food!