The co-working space remains, but the cafe has a new look and a new name, and is launching a creative hub for local artists.

If you’ve ventured through Clarendon in the past week, you may have spotted what appears to be a new neighbor: Three Whistles. But while the name and sign are new, the venue is not. At least, not exactly.

Known as CoworkCafe until last week, Three Whistles has re-branded to better represent its intention as a spot to eat, drink and work (words that now appear on its recently painted charcoal exterior). A fourth goal, “to gather,” is the focus of an event Monday, Oct. 14, the inaugural gathering of the cafe’s Arts Nexus series.

“It’s a collaborative effort to engage the art community,” says Three Whistles and CoworkCafe owner and founder Ramzy Azar, who has been leasing the space since 2018. “The art community being artists, arts entrepreneurs and the local community that have interest in art.”

While the cafe has been hosting live music on Friday or Saturday nights for more than a year, The Arts Nexus is a wholly new enterprise aimed at finding networking and career opportunities (both within the Three Whistles space and outside of it) for visual artists, performing artists and even chefs, Azar says. The initiative’s first event, billed as a “pre-launch,” will feature local singer-songwriter LEA and serve as a networking gig and starting point for a dialogue on “how dignified labor, artistic expression and prosperity align to build sustainable, well-leveraged communities.”

In addition to live events, The Arts Nexus will organize quarterly art shows within the cafe, which sports three large gallery walls. One of its exterior walls is also ripe for a mural, Azar says, which might be re-imagined annually. The series curators are local artist and self-professed “omnipreneur” Shalonda Ingram and digital artist and choreographer Mathew Heggem. And the pre-launch event on Oct. 14 will include a tie-in to Indigenous People’s Day (a renaming of Columbus Day that both the city councils of Alexandria and D.C. have recently backed).

“On #IndigenousPeoplesDay, we are gathering to honor the past and co-create a future of economic inclusion,” the event post reads.

Though Three Whistles is now the name for the cafe at large, CoworkCafe remains a smaller component of the overall concept. Nomadic workers looking to meet with clients, take calls in the cafe’s semiprivate phone booths or churn out pages on their first novel can keep returning to the shared workspace and pay for monthly or daily memberships (the front area of the cafe is also available to non-members).

But the new name represents the broader vision of eat, drink and work, Azar says, adding that the moniker might connote “wet your whistle,” “whistle while you work” and “the lunch whistle.” 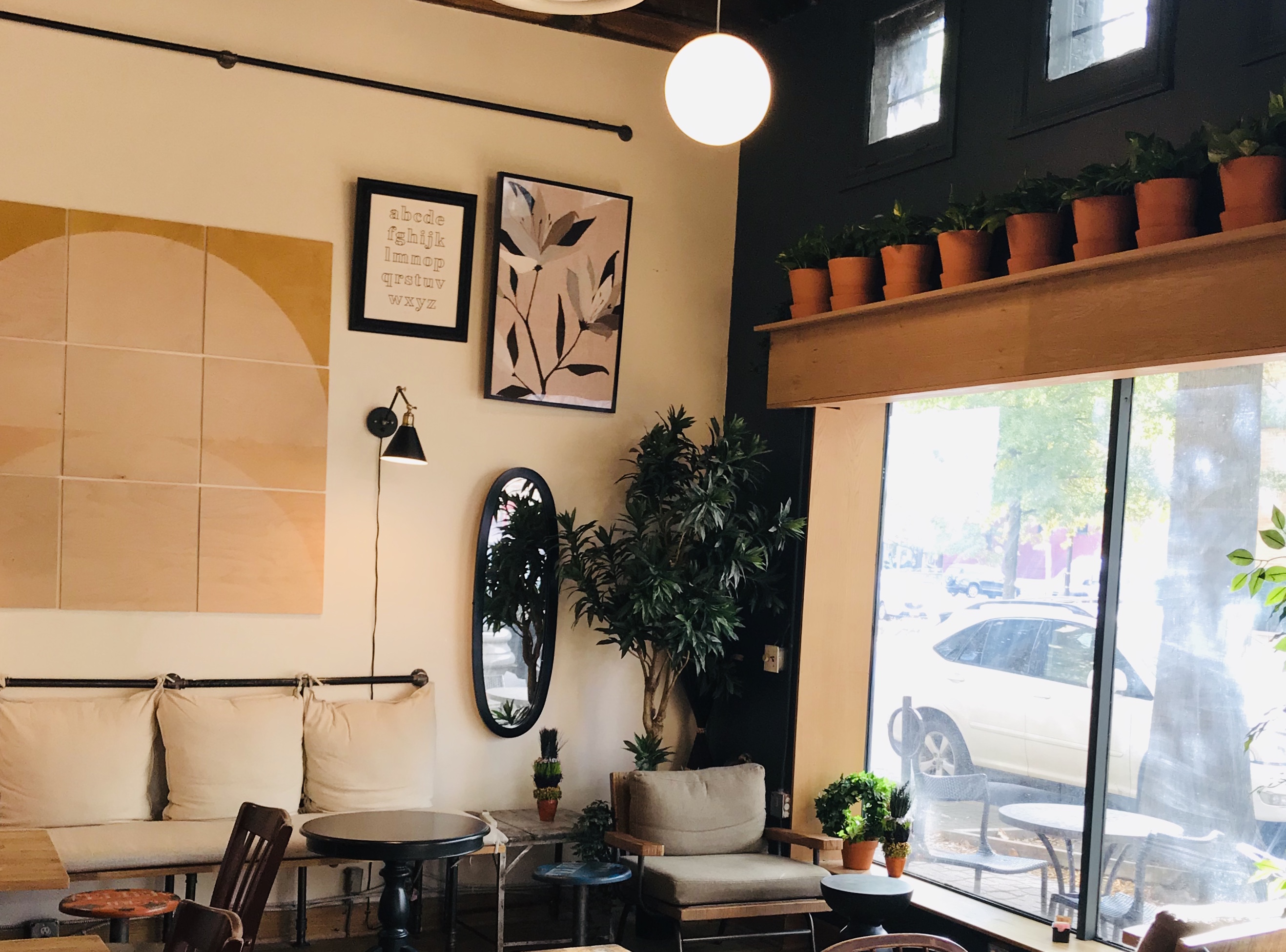 In 2014, CoworkCafe moved into the space, then operated by Boccato Gelato & Espresso (and formerly home to South-American grocery store El Chaparral Meat Market), as an addition to the existing coffeehouse. When Boccato closed in mid-2018, Azar’s business took over the lease and began building out the space, spending several months painting walls, adding live plants (check out the lengthy row of ZZs above the windows) and converting a walk-in freezer to a small, carpeted conference room. He says he may add other locations the road.

Azar is no stranger to the restaurant industry; the D.C. resident is also co-owner of Azar’s in Virginia Beach, a family restaurant specializing in Mediterranean food. Accordingly, Three Whistles will soon unveil an expanded menu that adds Mediterranean and other international small plates to its existing lineup of gelati and coffeehouse fare. You’ll also spot a few local breweries on its new beer menu, as well as wines by the glass and half-bottle—to encourage sharing, Azar says.

“The ultimate goal [is] creating this really cool, convenient, casual space for people to meet in different ways.”

The Arts Nexus Pre-Launch event will take place at Three Whistles on Monday, Oct. 14 from 7 -9 p.m. Admission is free.