Coaching Outside the Lines 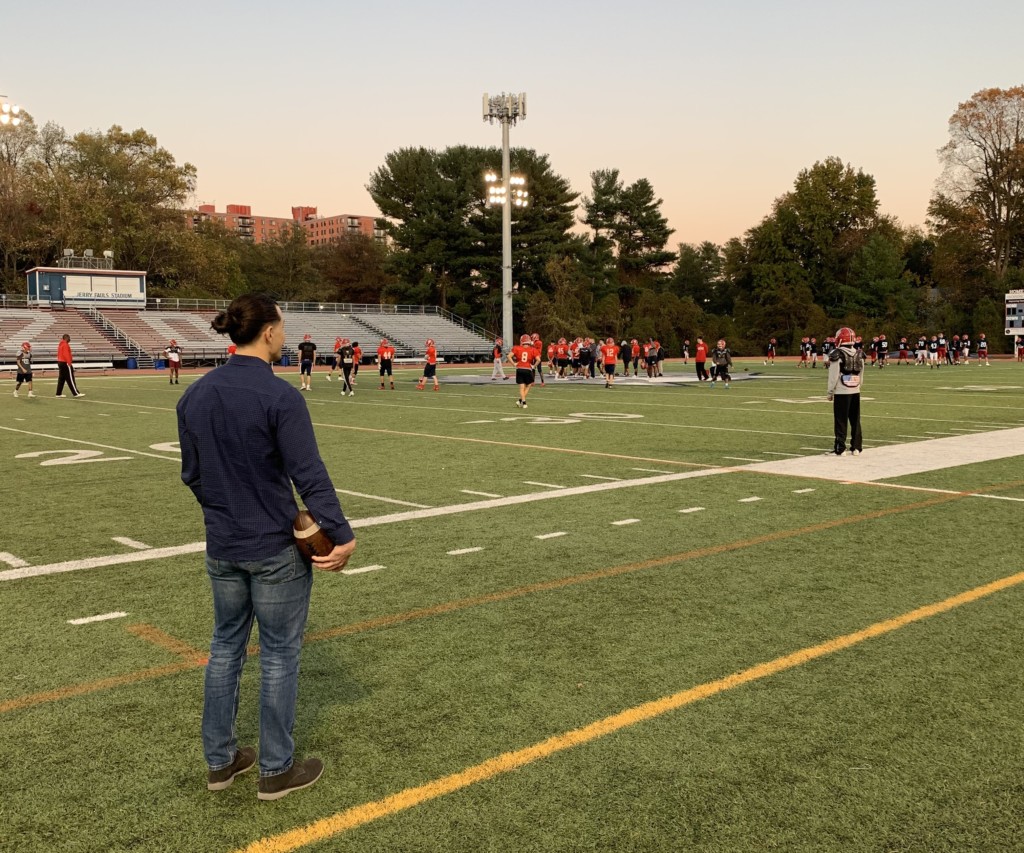 Justice Wolves quarterback Alexis Giron likes to cite a particular Bill Parcells quote that stays with him every day: Blame nobody; expect nothing; do something.

He heard it at football practice, but not while they were running routes and fine-tuning their zone coverage. Rather, it came up during a new character coaching series led by personal trainer and peak performance expert Brett Eaton, which the Falls Church high school integrated into its football program this past season.

“Going into [the series], my attitude wasn’t the best on the field and off the field,” says Giron, a junior. “So one big takeaway I had from this was responsibility and owning up to my actions and the mistakes I make. Like [Eaton] said, this might not help you put points on the board. It might not help you win games, but it’ll help you be a better man.”

That big-picture perspective is exactly what head coach Greg Weisbecker was going for when, during his second season as varsity head coach, he decided to dedicate roughly a half hour of practice time every other week to discuss non-football concepts—the goal being not simply to train great athletes, but great people.

“We want to give [students] a foundation that they can learn how to become men,” Weisbecker says. “We want them to have a person, a role model they can look up to, but also have that foundation of knowledge and skills and ideas that they can apply in their future.”

Enter Eaton, 32, who had already been running conditioning workouts with the team during the summer off-season for several years. A professional speaker, trainer and personal wellness coach who engages with audiences ranging from student-athletes to corporate sales teams, he recently partnered with Becky’s Fund, a D.C.-based nonprofit that aims to curb the epidemic of domestic violence through youth empowerment and advocacy. In August, he spoke to the Ballou High School football team in D.C. as part of the school’s Men of Code program, which encourages young male athletes to “become allies of women and girls.”

That experience left Eaton energized to share the same concepts with student-athletes in Falls Church.

“Our seniors, they were freshmen when they first met [Eaton],” Weisbecker says, “so that relationship piece [was already there]. We knew, hey, we can actually dig into some big topics that we want to teach our guys.” 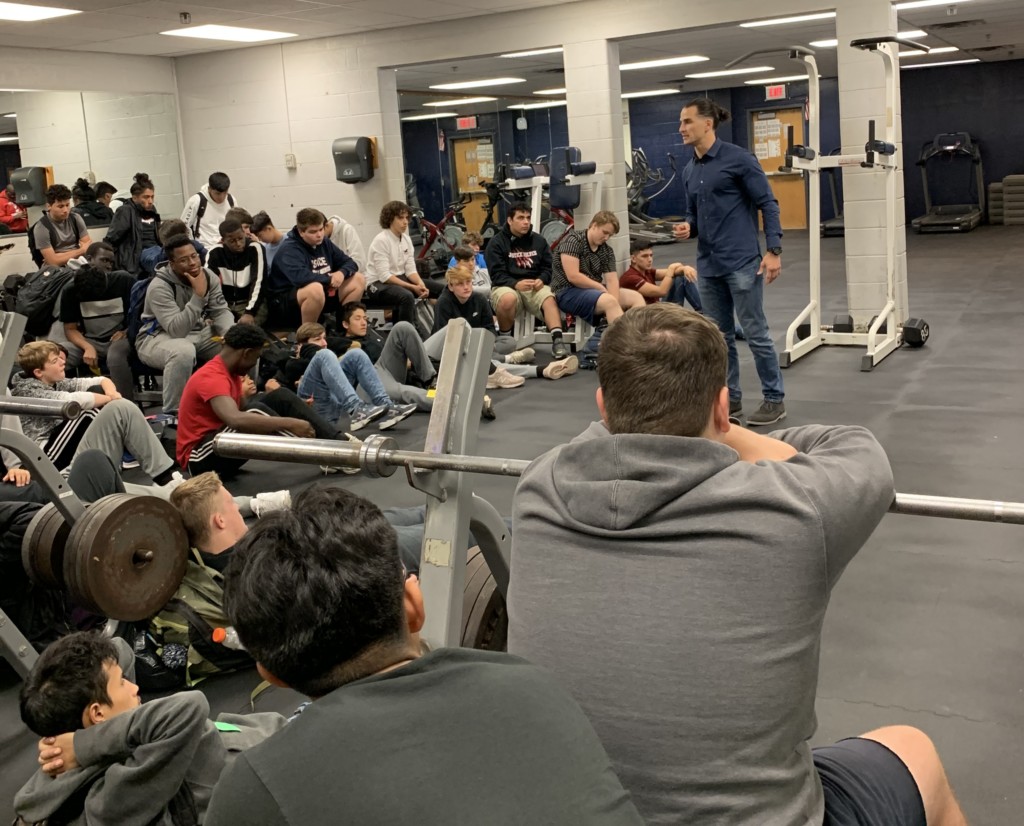 Eaton leads a discussion with student-athletes. Photo by Sydney Johnson.

During one session, Eaton shared the surprising statistic that 93 percent of communication is nonverbal.

“Ever since he taught us about that, it’s always been in my mind. I’ve started working on being overall a better person, so people think higher of me,” says senior center Ethan Jones, now mindful of maintaining a strong handshake, making eye contact while speaking and standing up straight—just a few of the adjustments he says he has consciously made in an attempt to make a good first impression.

During another session, Eaton parlayed his experience with Becky’s Fund into a conversation about sexual assault, domestic violence and what it means to be “a gentleman,” stressing the importance of consent, avoiding bad situations and denouncing inappropriate actions taken by others around you.

He offers his own definition of how a gentleman acts: “Honest even when it’s uncomfortable. Quietly confident; never arrogant. The same person in public as he is in private. Strives for a higher standard. Lends a hand to those in need.” 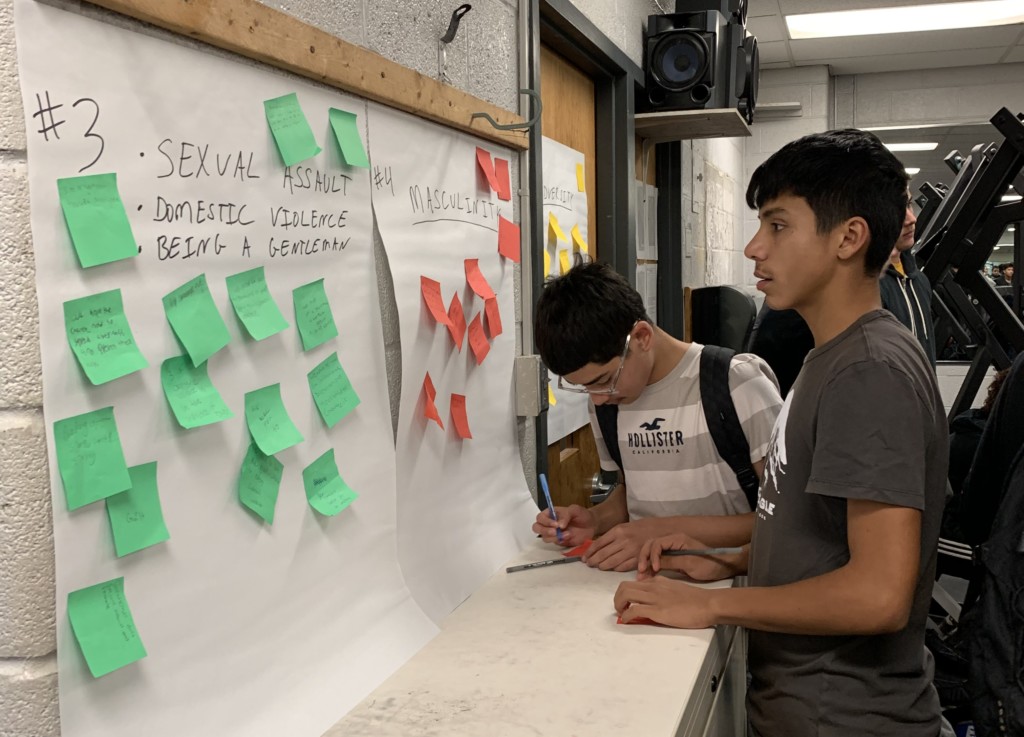 Student-athletes participate in a brainstorming exercise. Photo by Sydney Johnson.

On the subject of overcoming adversity, Eaton shared a personal story with the team. When he was 16, a back injury sidelined him from football, basketball and baseball for over a year, and his father died suddenly. Recalling that painful time in his own past, he urged the boys not to bottle up their own emotions, lest the pain resurface later in negative ways.

“This feeling of trying to be a ‘man’s man’ and making it look a certain way is not necessarily the best way to step into what we call masculinity,” he told them. “Your adversity now will become your advantage later.”

In retrospect, Eaton says, being an athlete shaped his own path in life. “High school sports were probably the only thing that kept me out of a ton of trouble,” he explains. “High school sports are really what kept me with direction and kept me on a schedule and gave me something to take my mind off of losing my dad and allowed me to still be a kid in a time when a lot of things changed and I had to become an adult for my mom and my sister.”

Though the character coaching program’s future is uncertain at Justice, indications of its impact have emerged since the team finished its fall 2019 season 6-4. Looking ahead to his senior year, Giron, the quarterback, says the experience made him want to be a better role model for next year’s incoming freshmen.

“I want everybody to take away that they can be someone better off the field,” he says.

Another player informed the coaches that the program inspired him to do a school research project on sexual assault and domestic violence.

“If I can help educate and just do my part in helping them be better young men,” Eaton says, “then I think everyone wins.”