"I want to hug the friends who have sustained me over the lonely years, touch their shoulders as I pass them sitting in a chair, drinking the tea we so often share." 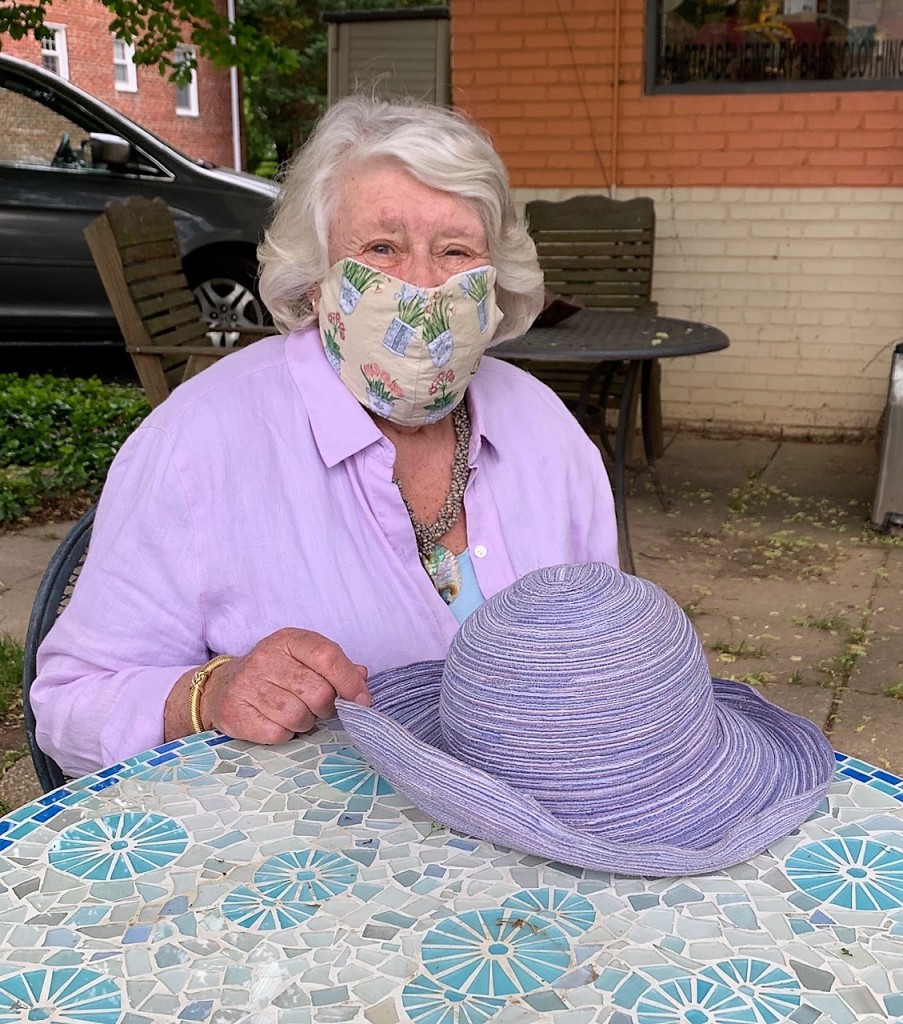 In this year of 2020, women have “gone to war” again as our mothers and grandmothers did in 1941, making do, re-purposing, inventing. The country needs masks! Sewing machines are being hauled out of dusty basement closets, old shirts cut up, elastic has vanished from the market and the internet is alive with mask patterns. We make them and give them like amulets, hoping to convey with them safety from the invisible enemy that mocks this year’s season of renewal.

I began to think about masks—their history and use—when “social distancing” began.  Masks have existed in many cultures for thousands of years, and have been found in Minoan and Chinese tombs, in Greek and Roman mythology and art, in African tribal traditions, Asian theater and the great carnival festivals of Latin America and the Caribbean. In Venice and other European cities, masks are luxurious, sensual, sending messages of flirtation and midnight trysts, all to end before Lent, the season of repentance and self-deprivation.  After all, one must first sin in order to repent.

In my native country, Ned Kelly, the infamous Australian highwayman of the 19th century, wore a metal mask and body armor (one can only imagine the discomfort of that on an Australian summer day!). And there was the mysterious Man in the Iron Mask, rumored to be Louis XIV’s illegitimate older brother, imprisoned for life by royal command.

During the plagues of the Middle Ages, physicians wore terrifying, raven-like masks with long projecting beaks stuffed with camphor and herbs to stave off infection. And perhaps the herbs would mask the stench of death.

Our current N95 masks are less grotesque in appearance, though to a patient with a high fever and its accompanying delirium, the vision of a medical attendant cloaked in PPE (how quickly we have all learned that term) might be a nightmarish vision.

I don’t want to wear a mask, but as a dutiful member of society, I will. I don’t want to social distance, either. I want to be able to hug my daughter and kiss her youthful cheek, feeling its round smoothness that has not yet begun to soften and crease with age. I want to hug the friends who have sustained me over the lonely years, touch their shoulders as I pass them sitting in a chair, drinking the tea we so often share.

Now, for safety, we sensibly withhold touch and presence, using technology as a surrogate. Zoom and Skype seem like masks too, a simulacrum of normality to assuage our fears and loneliness.  Our masquerade parties are conducted on Zoom.

When Australia went to war in 1939, civilians were issued gas masks with long corrugated snouts—one for each member of the family, hung on the back door. They were never used, except as playthings, props in the dramatic stories we invented as kids to exorcise our fear, children attempting to understand a sky-fallen world.

We are reminded that “the plague” is not simply an archaic disease. It is still with us, albeit changed in form—an unseen enemy which has no malevolence toward us, no purpose except to replicate itself. That it destroys its host is of no concern to the virus.

The verdant loveliness of spring—lawns green as Ireland, white dogwoods and azaleas turning ordinary gardens into ethereal dreams, tulips shouting in bright exuberance—is stalked by terror, by horror and fear long unfamiliar to us in today’s world.

“Life is mostly froth and bubble, Two things stand like stone. Kindness in another’s trouble, Courage in your own.”

Perhaps we should add humor to his prescription—kindness, courage and a sense of humor—comforting if inadequate weapons!

And a mask, of course, a talisman for safety.