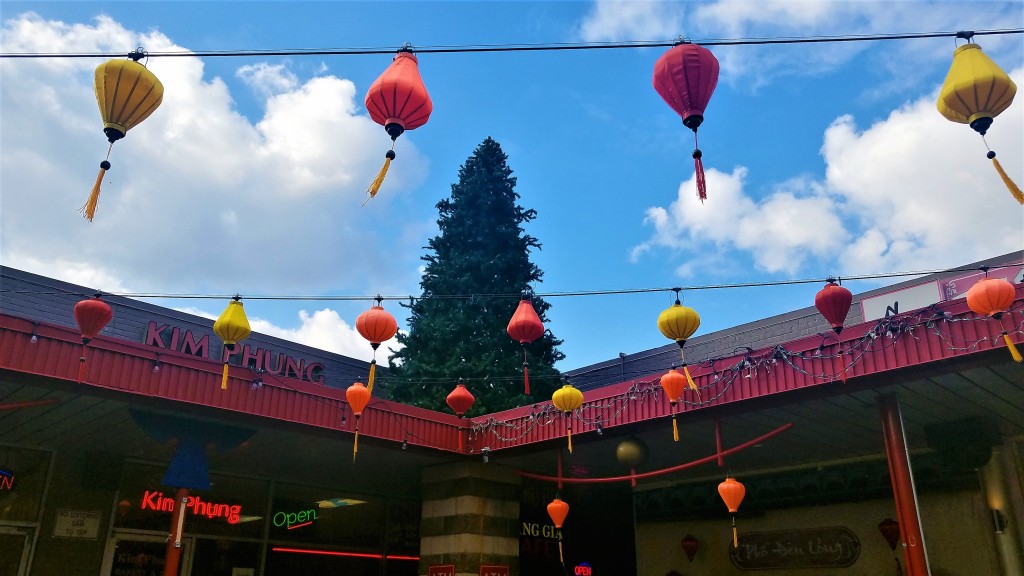 Lanterns at the Eden Center (Photo by Kim O’Connell)

Two trees flank a decorative fountain in the corner of the Eden Center, a popular commercial strip in Seven Corners. It’s a natural focal point for visitors and a place to sit and eat a banh mi sandwich or sip some bubble tea. On a recent Saturday, however, the trees were dressed to the nines—dripping with red ribbons and lanterns hung up for the forthcoming Lunar New Year, which falls on February 1 in 2022.

With its striking entrance gate, framed by two lion statues, the Eden Center is widely recognized as the largest Vietnamese commercial and cultural center on the East Coast. It boasts more than 125 restaurants, delis, bakeries, grocery stores and other establishments, including a Vietnamese language school and travel agencies. 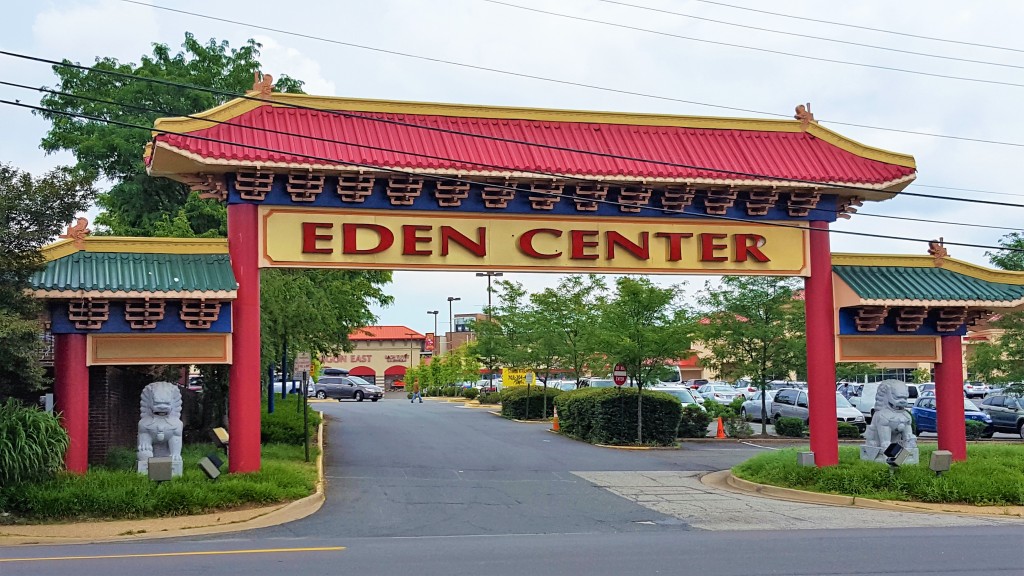 Through February 6th, Eden Center will celebrate the Lunar New Year (called Tet in Vietnamese) with traditional lion dances, music, special dishes, and other activities. Like Japan, Korea and Taiwan, Vietnam follows the traditional Chinese lunisolar calendar, which assigns each year to an animal in the Chinese Zodiac. This year, the year of the Tiger, promises passion and tumult, according to astrologers.

Opened in 1984, the Eden Center was the second act for the long-disappeared “Little Saigon” that once existed in Clarendon. Vietnamese refugees had settled in Arlington after the end of the Vietnam War, taking advantage of the low rents and available storefronts during construction of the Metro. Once the Metro was completed and Clarendon underwent a retail transformation, most of the Vietnamese business owners were forced to look for more affordable options.

An enterprising group opened the Eden Center in an empty shopping center, naming it after the Eden Arcade, an upscale retail area in the former Saigon. Since then, the Eden Center has thrived and expanded in recent years, introducing the large pan-Asian supermarket Good Fortune, among other welcome additions. This year, Virginia officials will install a historical marker commemorating the Eden Center’s importance to Vietnamese and American culture.

Whether you want to celebrate Lunar New Year, pick up some Asian groceries or grab a delicious bite, here are some tasty options for your next trip to Eden. 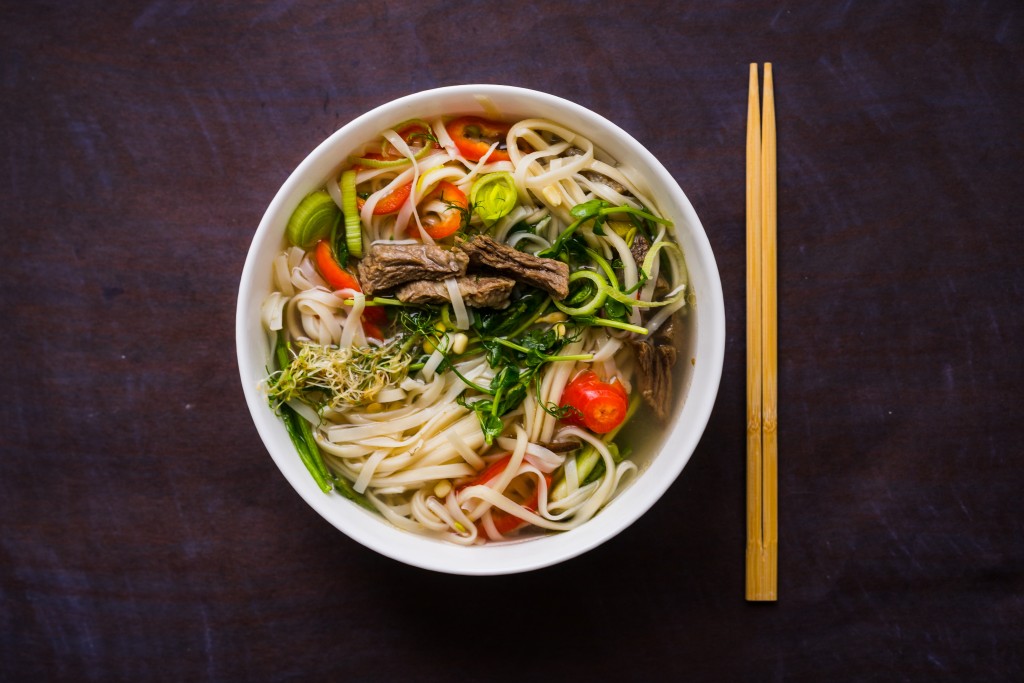 Photo by Kirill Tonkikh on Unsplash

During the winter months, this small shop, located in one of Eden Center’s interior malls, is the place to go for warm, comforting soup. Although it offers pho, the traditional noodle soup most associated with Vietnam, the menu also includes a variety of other tempting soups, including a snail soup (bun oc) with rice noodles and tomatoes, a vegan noodle soup, and a spicy beef and pork soup (bun bo hue).

Vietnamese sausage (cha lua) is the main attraction at Cha Lua Ngoc Hung, which serves the meat different ways, including fried (cha chien) or in a cinnamon pate (cha que). Other offerings include crispy dumplings filled with beef and pork (banh gio) like those sold on the street in Vietnam. The small store frequently has long lines, so plan accordingly. 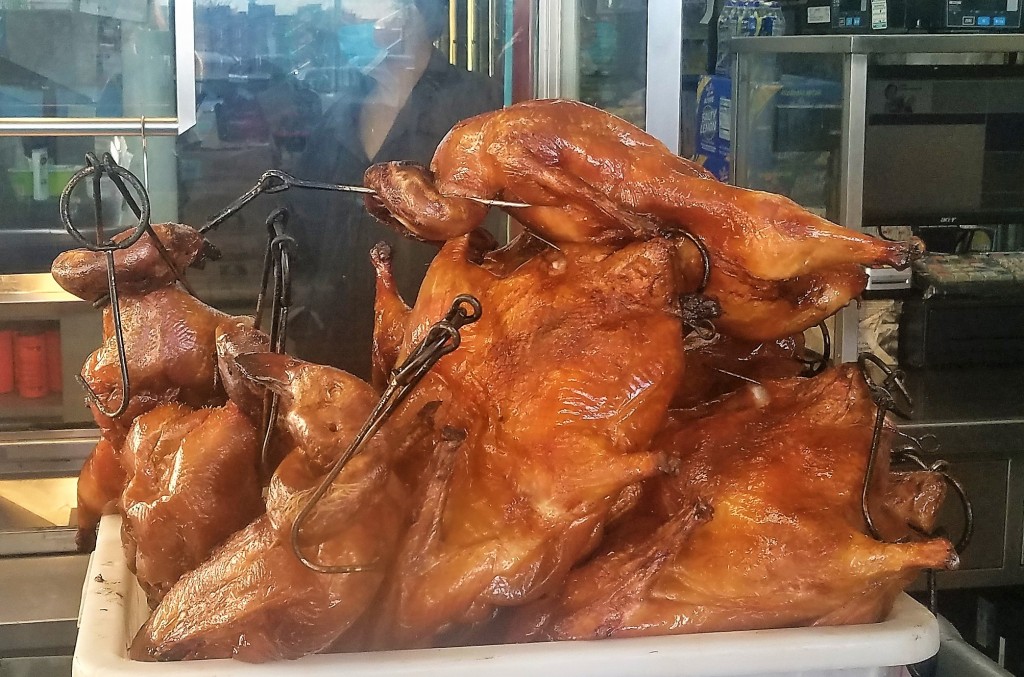 For sheer variety and hot, prepared options, the Good Fortune pan-Asian supermarket on Eden Center’s east end is a go-to. But for authenticity, the Cho Eden Supermarket, located near the center’s striking clock, can’t be beat. Produce, sauces, spices, meats—as well as the store’s signature roast ducks—can all be found here, alongside sweet treats perfect for a New Year celebration.

In recent years, Eden Center has opened its doors to more non-Vietnamese establishments that have added more international flavor. Firepan Korean BBQ is one such place, with a menu of marinated and unmarinated meats, kimchi pancakes, Korean classics such as bibimbap and jiggae, and less common options such as pork intestines. 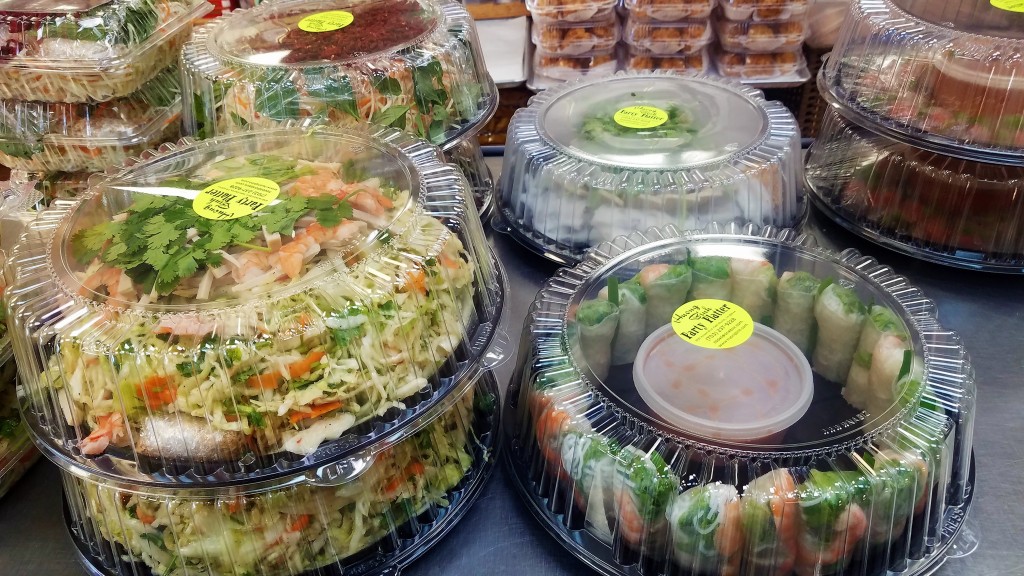 This centrally located deli boasts a wide variety of authentic grab-and-go foods such as fried spring rolls (cha gio) and banh mi sandwiches, but Huong Binh is especially known for its party platters and sweet mooncakes. Especially around Lunar New Year, these goodies are piled high in the store and fly off the tables.

This hidden gem, tucked inside one of the center’s mini-malls, is well known for its barbecue pork summer rolls (nem nuong cuon nimh hoa), steamed rice cakes topped with chopped dried shrimp and scallions (banh beo), and conch tossed with young lotus root and other vegetables (goi oc), among other options. 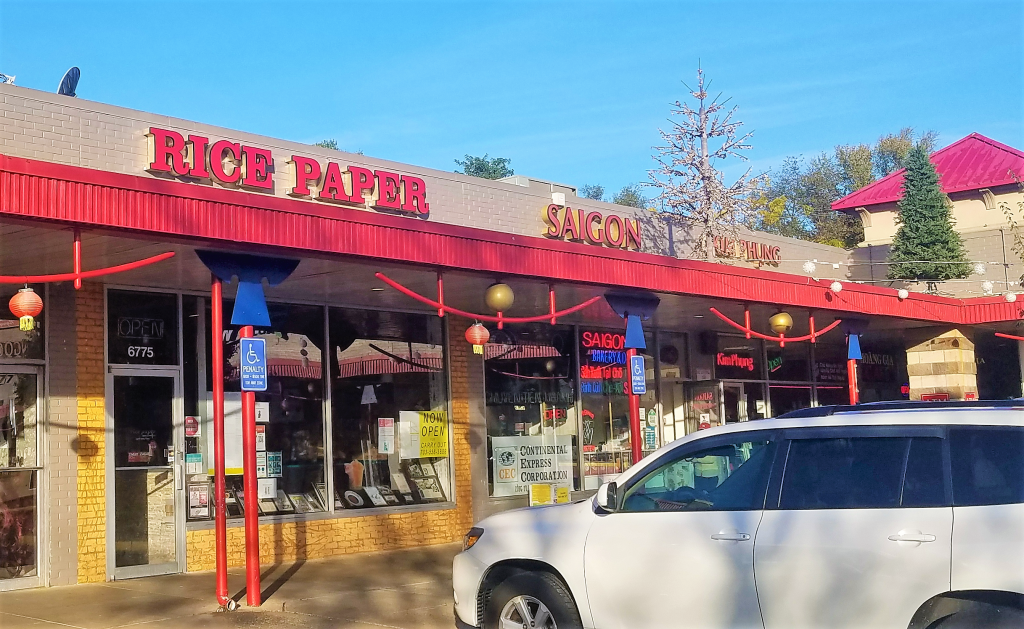 Storefronts at the Eden Center (Photo by Kim O’Connell)

Rice Paper is probably best known for its tabletop service with dry rice-paper disks and warm water. Patrons dunk the wrappers in the water to soften them and then make crunchy, delectable summer rolls out of a mile-high pile of meat, veggies and garnishes. The restaurant also offers a full array of Vietnamese dishes, served in one of the most stylish spaces at Eden Center.

Delis abound at the Eden Center, but the Saigon Bakery & Deli has persisted for years because of its authentic and high-quality food. Good bets include fried spring rolls (cha gio), sweet sesame balls, and pate chaud—meat pies that call to mind the French influence in Vietnamese cooking. This bakery also makes cakes in traditional flavors such as pandan leaf.

Tofu lovers rejoice about Thanh Son Tofu, Eden Center’s famous tofu buffet. Although tofu frequently appears on the menu at other places, here it’s center stage and offered in a variety of flavors, including plain, lemongrass and mushroom. Know before you go that long lines are common.

Bubble tea places have exploded at the Eden Center in recent years, available at most delis and at a handful of standalone tea shops. Located near the fountain, Vivi Bubble Tea gets consistent high marks, offering flavors ranging from mango and lychee to Oreo cream and Japanese matcha.

→ Sonia Nga Johnston Arrived on U.S. Soil with Little More Than the Clothes on Her Back. Today She’s a Bank President.