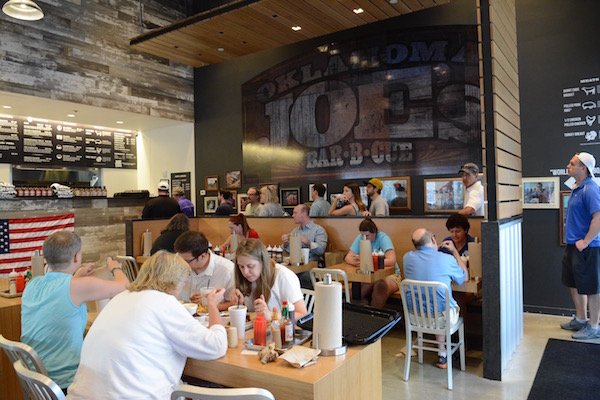 Oklahoma Joe's opened its first East Coast location in Merrifield in May. Photo by Laura Hayes

Oklahoma Joe’s made its East Coast debut when its Dunn Loring metro stop location opened on Memorial Day. The family-run barbecue joint, known for Obama-endorsed ribs, has Oklahoma State Fair origins. That’s where co-founder Joe Davidson built 18 smokers to feed the masses and realized he had a knack for it — building more than one million smokers in the years that followed.

Oklahoma Joe's Barbecue and Catering was created in 1995, and the first restaurant opened in January 1996 in Stillwater, Oklahoma, followed by the opening of the fabled gas station location in Kansas City that same year. (The Kansas City location is now separate from the chain and is known as Joe's Kansas City Bar-B-Que). Twenty years after opening its first retail outlets, Oklahoma Joe's is beginning to expand outside of the Midwest.

The restaurant is often shortened to “OK Joe’s,” and that’s exactly what it is — okay. Sadly, there’s no romance or honky-tonk charm at the counter service restaurant. And, most importantly, there’s little sign of barbecue’s most vital ingredient — smoke.

Take the Smoked Potato, for example. The dish, which is unique to this location, features an Idaho potato smoked in-house and loaded with chopped brisket, sour cream, butter, cheese and chives. But the spud was dried out and didn’t have a hint of hickory, or any other wood flavor.

Not even the brisket helped, because the meat also lacked smoke and came across as more of a pot roast impersonator. We sampled it as a part of the $29.99 Grand Champion, a platter for two that also includes ribs, pulled chicken, pulled pork and “burnt ends” (more on these below) plus fries, Texas toast and three sides. This exercise in excess is the best way to tackle most of the Oklahoma Joe’s menu in one sitting. The ribs and pulled chicken emerged as favorites. The ribs — true to their reputation — were succulent, with a nice pink color and meat that pulled right off the bone. Side selections are not surprises: onion rings, beans, slaw, potato salad and more.

Another specialty on which Oklahoma Joe’s makes its name is burnt ends. These small, quirky cuts of meat come from the point of the brisket and should be equal parts luscious fat and crispy bark. Because customers in the know always go for these heavenly bits (and they’re limited in quantity by anatomy), barbecue joints often run out of them the fastest. At Oklahoma Joe’s they have a seemingly unlimited quantity, even though there’s no bark, no fat and the meat comes in cubes. 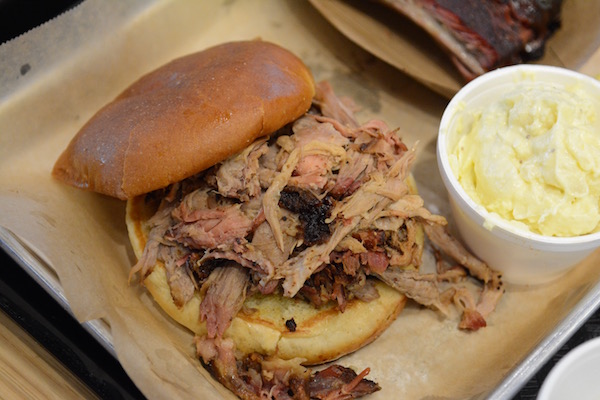 We also sampled one of the signature sandwiches that suggests the restaurant aims to do more than one style of ’cue. The Carolina is advertised as a pulled-pork sandwich piled high with tangy slaw that comes dressed in vinegar sauce with two sides. Unfortunately, our sandwich arrived sans slaw, without sauce and missing one of the sides. I’m glad I asked for a mulligan on my order, because the “Best Beans on the Planet” may very well be.

Oklahoma Joe’s does not serve booze, only fountain soda.

When you pop into the restaurant, it feels as sterile as a Panera Bread, and it’s set up in the same fashion. Line-up, order off a board and wait for your heap of food to arrive on the other side. Justin Bieber seems to play more than any other artist over the airwaves (at least that was the case on the occasion of our visit) and the décor is minimal. During a Saturday night for dinner, there was always a healthy line and tables were filled with young families.

After finishing my seemingly smoke-free meal, I asked whether the restaurant smokes its meat in-house or off-property. The manager escorted me into the kitchen once I confirmed that “I wasn’t from a competing restaurant.” Indeed, there is a honker of a smoker back there, so the mystery remains over why the food is a miss. Go if you’re craving ’cue in a hurry or if you care more about convenience than authenticity. Otherwise, you're better off seeking smoke-kissed meats at another NoVa establishment, like Texas Jack’s Barbecue or Rockland’s in Arlington, or Smokehouse Live in Leesburg.