We’re not quite ready to shout “ole!” 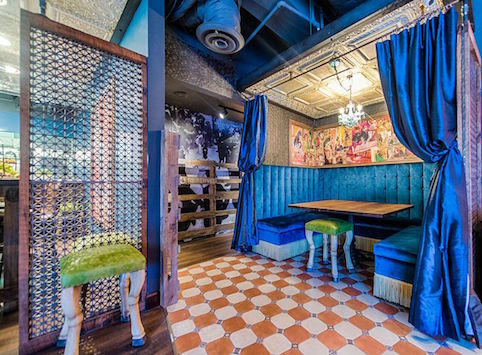 ​Basque cuisine is definitely having a moment. Restaurants such as Anxo and Dirty Habit in the District serve pintxos, the Basque answer to tapas and usually served on a stick, and the funky hard ciders found throughout that region of Spain are now offered at trendy bars stateside. So it’s no wonder that Pamplona decided to focus on Basque flavors despite the fact that its namesake city — known for the running of the bulls — is actually located in the neighboring province of Navarre. The restaurant gets around this pesky fact by saying that it “draws its inspiration from Ernest Hemingway’s travels throughout the Basque region of Spain.” No matter. Any excuse to eat the flavors of Basque country is fine by me.

Chef James Martin, who has cooked locally in such well-respected kitchens as Vidalia, Bourbon Steak and Restaurant Nora, pulled together a menu of Basque classics updated with a chef’s touch. The menu is broken up into three sections of smaller plates titled “salted,” “smoked” and “foraged and farmed.” Larger dishes can be found below under the headings of “land and sea” and “paellas.” A gratis dish of vinegary and herbed olives starts your meal, and servers warn ahead of time that dishes come out when they’re ready rather than being coursed.

In some cases, Martin’s riffs pay off — such as with a plate of Serrano ham dotted with olives and caper berries plus a scoop of olive oil ice cream and brioche toast. Despite it sounding more gimmicky than tasty, the interplay of sweetness, brine and umami turned out to be our favorite dish of the evening. Other starters didn’t measure up. Albondigas, a.k.a. meatballs, were tough and dry; patatas bravas, those ubiquitous fried potatoes found at tapas bars, lacked seasoning, garlic and crispiness; and rabbit croquetas were a one-note bite that mostly tasted generically fried, with little evidence of the much-needed punch of whole-grain mustard promised on the menu. An intriguing-sounding dish called egg gratin also mysteriously fell short on flavor, despite supposedly packing roasted mushrooms, garlic breadcrumbs and manchego cheese.

Dinner was saved with the arrival of our wild mushroom pasta entrée, which was perfectly seasoned and teeming with flavor from San Simon (a smoked cow’s milk cheese), kabocha squash, fried artichokes, parsnips and herbs. And we were completely won over again with the arrival of dessert, a rich St. James almond cake filled with airy Catalan crème infused with bay leaf brown butter. This simple yet heavenly dessert is not to be missed.

If your dining partner jokes that he wants to sample all of the sangrias, your server just may smile, turn on her heel and head back to the table a few minutes later with eight adorably teeny glasses filled with various shades of white, pink and red. Standouts were the blend of cider, Spanish brandy and lime and the sparkling, a concoction of cava, lemon, ginger and Maraschino liqueur. Expect other areas of the menu to pull heavily from Spanish drinking traditions, as well, including the all-Spanish wine list, Spanish beers in bottles and on draft, and cocktails made with Spanish flavors such as house-made tonics, sherry, bell pepper and saffron.

​The 3,600-square-foot space was smartly broken into smaller nooks to evoke a cozy feel, each area decorated with a color palette inspired by sangria, a mix of tile and wood, medieval touches and plush banquettes along the wall softened with throw pillows. A lively crowd fills the restaurant soon after it opens, taking advantage of the sangria samples and working through the varied menu. Come spring, the 54-seat patio will be coveted for sipping delicious frosé — that’s frozen rosé enhanced with saffron honey, Valencia orange, lemon and Spanish brandy — and frozen white passion-fruit sangria flavored with green menthos tea, lemon, albariño and gin.

Wait. From our meal of high-highs and low-lows, it’s evident that the kitchen is staffed with talent — but the team still needs to work on execution, and perhaps rethink some of the less successful dishes. Luckily, the outstanding service, cool space and fun drinks are likely to keep folks returning until the kitchen rights its ship.