For Black Union Soldiers, A Musical Tour of Duty

Rosslyn's hills were alive with the sound of Civil War music 150 years ago. 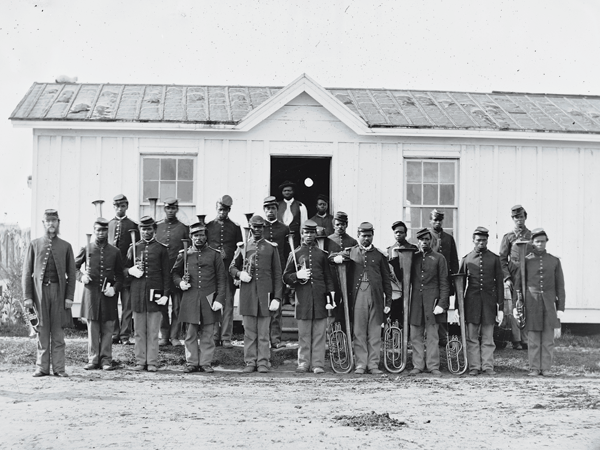 By the end of the Civil War, African American soldiers accounted for 10 percent of the Union Army, according to U.S. National Archives records. They held combat roles in artillery and infantry, and also performed support functions as carpenters, cooks, laborers, scouts and spies.

And musicians—such as the members of the 107th U.S. Colored Infantry Band, seen here 150 years ago outside a barracks at Fort Corcoran, a wood-and-earthwork fortification built in 1861 to protect the southern end of the Aqueduct Bridge (a precursor to the Key Bridge) in the area we now know as Rosslyn.

Black military band members fulfilled a number of duties under the command of white officers. Buglers were called on daily to play reveille and taps, while the larger band likely played tunes during religious services, drills and marching parades and provided evening entertainment for their brothers in arms.

“The army didn’t campaign much in winter, so by November they were settling in,” says Mark Benbow, an assistant professor of history at Marymount University and museum director for the Arlington Historical Society. “That’s when music became really important to pass the time.”

In addition to playing concerts for the troops, the bands also performed for civilians in the area. Officers would invite their sweethearts and townspeople to come and listen, Benbow says, and the shared experience helped ease the tension of military occupation.

Musical parades and other public performances also helped the Union Army in its efforts to recruit Black soldiers—including free Northerners and emancipated slaves. All told, some 179,000 Black soldiers served the Union effort, according to the National Archives.

Though some instruments were army-issued, others were procured more organically. “Officers—and occasionally some enlisted men—would chip in to buy them so their band members would have good instruments to play,” Benbow says. “Music was important for morale.”

Especially when a long, cold winter lay ahead.