From Yucatan, With Love

Part business and part art, District Taco has found a recipe that keeps fans coming back for more. 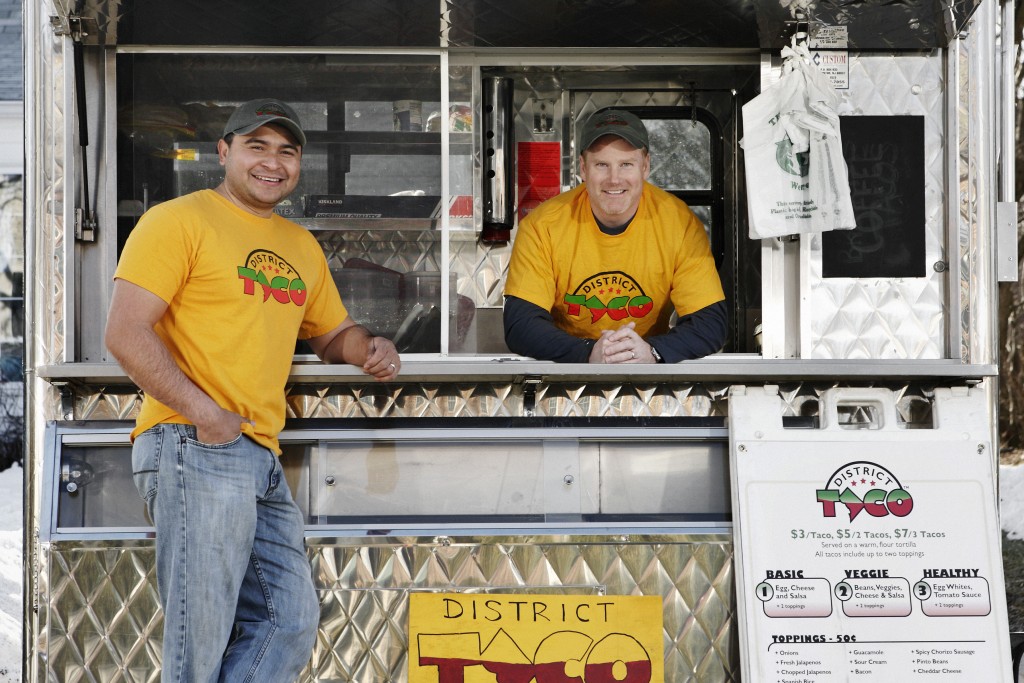 No matter that it’s 10:30 a.m. on a Tuesday, and strangely quiet at District Taco. The grill is busy, tended by a disciplined, yellow-shirted army preparing for the inevitable lunch rush, flipping and turning and poking long rows of fresh, marinated meats and vegetables. The sharp sizzle cuts through the bright morning.

Sitting at a table overseeing the action are Osiris Hoil and Marc Wallace: the cook and the capitalist. The food guy and the money guy. They met in the summer of 2008 when Hoil was visiting his mother-in-law, who lives next door to Wallace in nearby Leeway Overlee.

At the time, Hoil was working construction and Wallace owned a software engineering company. Soon their kids were playing together, and Hoil was introducing Wallace to his freshly made salsa, ceviche and other spicy recipes he learned from his mother growing up in Yucatán, Mexico.

Then Wallace sold his business to Symantec and Hoil lost his job in the economic meltdown. That’s when they decided to join forces in a new venture. Their food truck in Rosslyn, which rolled out in July 2009, was an immediate hit with a devoted Twitter following that tracked the cart’s daily movements. The restaurant on Lee Highway opened a little more than a year later, with Hoil’s brother, Eric, running the kitchen.

If you’ve ever had the huevos rancheros or the burrito mojado—or the namesake tacos—you know why there’s a line out the door every night of the week. And you won’t be surprised that a second brick-and-mortar location opened near Metro Center in Washington, D.C., this spring, or that future locations are planned for Capitol Hill and Crystal City. As District Taco’s slogan says: “¡Orale!” Right on!

Why the name District Taco if you originated in Arlington?

Wallace: The original intention, to be fair, was to be in D.C. But the complexity in D.C. is that the on-the-street vendors have to have a kitchen and truck in one, as opposed to a cart that goes up on the sidewalk. The Arlington government was very good in helping us get approved; it was very streamlined.

Hoil: People used to give us a hard time about it. But at the same time, there’s California Pizza Kitchen—not in California, right? Or the [Washington] Redskins—where do the Redskins play? They’re in Maryland!

How important has the local community been to your success?

Hoil: Very. All our advertising is word of mouth. We have friends who come here twice a week, three times a week. And they go and they advertise for us.

Wallace: The community has really helped us to evolve this location. When we started, people would come in and go, “Why don’t you do this, change the menu, the menu’s hard to read,” etc. And Osiris would say, “OK, that’s a great suggestion. Let’s incorporate it in our business model.” What you see today [reflects] all the input from the community.

Was it a big deal when you started serving beer?

Hoil: To be honest, if you come for beer here, I’m in big trouble. I need you to come here for my tacos, for my burritos, for my quesadillas.

How are you different from other Mexican places in the area?

Hoil: What’s different is, I’m from Mexico. I grew up there. The recipes I got from Mom and from family. I use a lot of garlic for all the meats, and that’s what gives it a lot of flavor.

Has your mother been to District Taco?

Hoil:  Yeah. She says I need more salt. The taste for everybody is different. My mom, she’s used to eating [super-spicy].

What are your favorite things on the menu?

Hoil:  If I don’t like it, I don’t serve it. Everything we have here, I love.

What’s the secret of that sauce on the burrito mojado?

Wallace: And there’s animal fat in there, too, right?

How does this compare with your previous jobs?

Hoil:  For me, it has been incredible. I didn’t know we would be so popular. I simply wanted to have a job when I started District Taco, and I didn’t care if it was a taco stand. Now that we are growing and the restaurant is successful, I feel that I am living the American dream.

Wallace: I started as an aerospace engineer, then started a software company, and now tacos. The products are radically different, but I’m finding that starting and running a small company—whether in the restaurant industry or the software world—uses the same business fundamentals.

Do you still see your business model as a work in progress?

Hoil:  Cooking is like art. That’s the way I look at it. You take one thing to another thing, and then you put it together and see the result. Sometimes it’s gonna be delicious. Sometimes it’s not [so you make adjustments]. Every time we create the salsa for the mojado, we just keep adding more peppers to it.

Hoil: We love what we do…and we’re gonna continue with what we love to do.

Christopher Durso is a magazine editor who lives in Arlington. He tries to limit his burrito-mojado consumption to one a month.