Getting to Know Don Rockwell

His website is a food industry favorite. But to most, Don Rockwell is still a mystery. 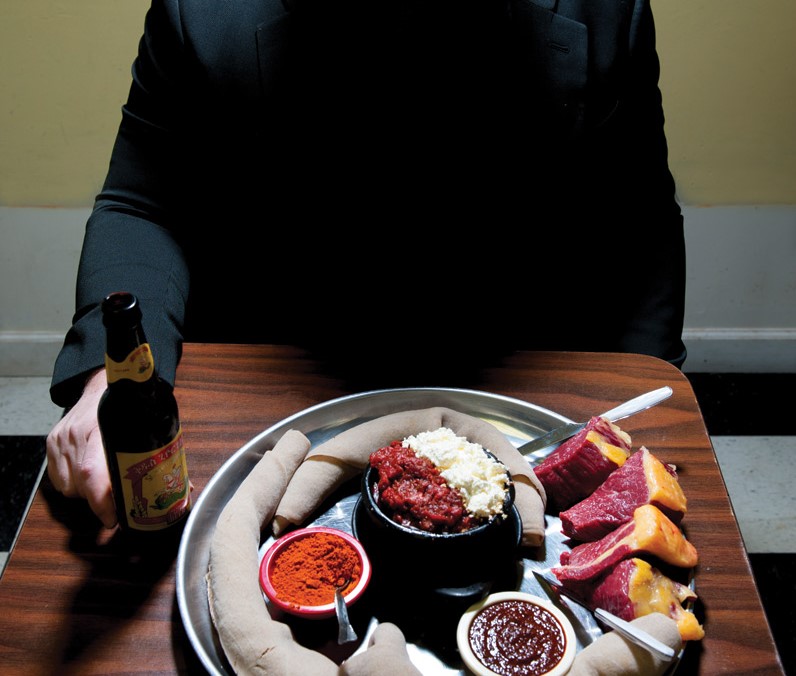 Rockwell with one of his favorite dishes: Ethiopian kitfo (seasoned raw beef) from Abay Market in Bailey’s Crossroads. Photo by Michael Ventura

The only thing in Don Rockwell’s fridge is half a beer. Soon it will be joined by leftovers. Lots of leftovers.

When we first met up with Rockwell, he hadn’t been grocery shopping in two months. As the founder of DonRockwell.com, an online food forum centering on restaurants, chefs and industry gossip, he eats out every day—usually for lunch and dinner. He hates doing dishes, so he avoids dirtying them in his home off Columbia Pike.

Dining out has become a vocation of sorts for the enigmatic foodie, a former IT professional whose website draws more than 25,000 page views per month, according to the online analytics firm SimilarWeb. (Rockwell’s own site tracking suggests a much higher number, upward of 10,000 page views per day.) It’s also been a coping mechanism ever since he lost his second wife to ovarian cancer 14 years ago. Her diagnosis came just weeks before their wedding. A year later, she was gone.

After her death, Rockwell found solace in the online food forum eGullet and began writing about his own gastronomical adventures. In 2005, he launched his eponymous website, and a new online community was born.

Anyone can lurk on the site—which counts more than 270,000 posts in its archives—but to participate in the discourse, one must apply for free membership and set up a profile. As a safeguard against trolls, users are required to register with their real names, although they can use nicknames when posting.

A lot of the banter is inside baseball—discussion threads delving into the finer points of restaurant openings, menu changes, service issues, food sourcing and personnel shuffles. The site interface is fairly bare-bones (to date, it still does not support video, and photos look clunky), but users don’t seem to mind.

Five months before a salmonella outbreak temporarily shuttered Fig & Olive (also in CityCenterDC) last fall, a conversation erupted on DonRockwell.com about the upscale chain’s commissary-style setup, whereby it distributed frozen dish components to its various restaurants from a central location in New York. The safety of that supply chain would later be questioned in local and national media reports. (The restaurant has since reopened its D.C. location, but the parent company remains mired
in litigation.)

“I like the fact that real industry pros come on and give their thoughts,” says “Bart,” who, like many posters, prefers to go by his forum handle. “They don’t post that often, but when they do, they provide a perspective that you just don’t find on Chowhound or Yelp.”

Site members have been known to air their dirty laundry—such as the Arlington restaurateur who, in 2014, found himself in need of a new executive chef and posted a job description that stipulated: “You don’t go out every night after work and drag yourself back in to work the next day reeking of Fireball and bad decisions.”

But no one dishes on the site more prolifically than Rockwell himself, who claims some 19,000 posts to date, including 150 or so “Greatest Hits”—from his musings about breastfeeding in public to his distaste for menus that feature chicken breast and filet mignon.

Though he has no formal culinary training, Rockwell has amassed a fair amount of cred over the years and held a brief stint as a beverage columnist for Washingtonian magazine from 2006 to 2007.

“Don is a very talented and passionate individual with a considerable depth of knowledge concerning food, beverage and the hospitality arena,” says restaurateur Ashok Bajaj, whose Knightsbridge Restaurant Group owns eight restaurants in the D.C. area, including Rasika and the Oval Room.

Rockwell isn’t shy about sharing his opinions. He is unabashed in his devotion to the cooking of Eric Ziebold, the former CityZen chef whose new venture, Kinship, opened near the Washington Convention Center in December. (He admits that Ziebold is a friend but says he’s not chummy with most industry folks and stipulates that he never accepts free meals.)

At times, he can be perceived as antagonistic. In November, Rockwell bemoaned the number of talented  local chefs choosing to work for corporate restaurant groups (“a game of big box stores,” he wrote) rather than venturing out on their own. His post prompted a heated Twitter exchange with famed chef José Andrés, whose ThinkFoodGroup empire includes 17 restaurants and a retail product line.

On this point, Rockwell likes to challenge the oft-cited claim that Washington’s restaurant scene has arrived. “The Great Recession really hurt D.C. in terms of being a restaurant town,” he says.

“Everyone seems to think that we’ve become this great, important dining mecca. I don’t see it. In fact, I see the opposite. Mediocre restaurants are opening second, third and fourth locations. Absentee chefs are lending their names from other cities. We’re just now starting to see real local talent emerge from the carnage.”

Though elusive in person (he avoids the limelight and declined to show his face for this piece), Rockwell has an Oz-like presence in the digital realm. His missives are usually food-related, but they occasionally veer off into sports or politics. He can be prone to hyperbole—referring to his own website, for example, as “the most influential regional restaurant forum in the world” and his own fine-dining guide as the “best single-city dining guide ever written”—and then deeply self-deprecating. (In the era of Yelp when everyone is an expert, the man who dines out more than a dozen times a week still refers to himself as a “quasi-critic.”) Occasionally, he’ll post a rant in the middle of the night, and then a few hours later, it mysteriously disappears.

Rockwell likes to think big. In 2010, he announced his intent to launch an association that would rival the Restaurant Association Metropolitan Washington (which counts roughly 650 restaurants and vendors as members and whose RAMMY Awards are akin to Oscars for the D.C.-area food community). But the venture has yet to materialize.

He blames his inertia largely on chronic and debilitating pain. Once an avid runner and tennis player, Rockwell was sidelined in recent years after a series of hip surgeries. He says he’s thankful for having the foresight to buy the private insurance that currently supports him.

Some days, he says, it’s a challenge to get up and go. But he hasn’t lost his appetite.

Dining Out with Don

We asked Rockwell to share some of his favorite restaurants and dishes in Arlington, Falls Church and McLean. For an exhaustive chronicle of his dining adventures, visit dcdining.com.

What to order: Kitfo ($16), an Ethiopian dish of raw, seasoned beef. “They actually cut it right in front of you. I like it medium spicy.” 3811-A S. George Mason Drive, Falls Church (no website)

What to order: Fesenjoon Squash ($19), a dish that finds pomegranate, walnuts and braised chicken stuffed inside a whole saffron-steamed acorn squash. www.amoosrestaurant.com

What to order: “Get anything on the menu. [It’s] an absolute gem of an independent coffeehouse—drinks made with love, and superior, friendly customer service.” caffeaficionado.com

What to order: Ginger Scallion Chicken ($24) —a whole bird, roasted and cleaved. www.fullkeefallschurch.com

What to order: Empanada Picante ($1.85), a savory pastry made with cornmeal-laced flour and a layer of jalapeño-flecked queso. “Get it for breakfast. They open at 6 a.m.” www.panamerican-bakery.com

What to order: Gỏi Vịt ($14), a Vietnamese dish of duck meat on top of shredded banana blossom. ricepaper-tasteofvietnam.com

What to order: Pozole Rojo ($10), a Mexican soup with roasted pork shoulder and hominy. tacobambarestaurant.com

Jessica Strelitz is a digital media professional and food, wine and spirits writer. She lives with her husband and two boys in Falls Church.