Good Night to a Great Bar

Gone but not forgotten, Clarendon Grill was a place where life happened. 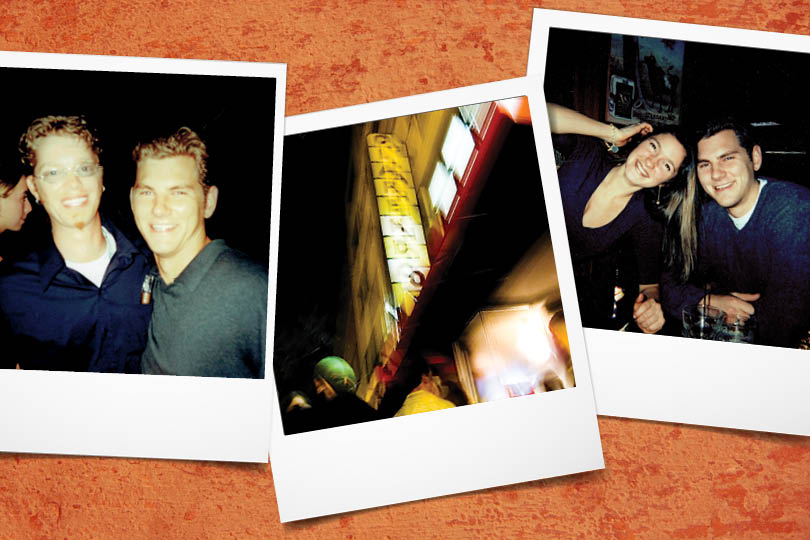 The author with chef and mentor Kevin Weeks (left) and the woman who would become his wife, Meredith (right). Photos courtesy of Nick Freshman (far left and far right); Vincent Gallegos (exterior).

In November, Arlington’s Clarendon Grill closed after 22 years. Even locally, this was not major news — bars close all the time. For many of us who were a part of the Grill, however, it was a significant event. For me, it opened a floodgate of memories.

I first walked into the Grill off the street in the summer of 1998. Fresh out of college with a creative writing degree and consequently no viable job prospects, my only goal of the summer was to get a job that would allow me to move out of my mom’s basement.

I knew I loved the restaurant business, but had barely any experience. Naturally, I thought I should be a bartender. After a day in the city getting turned down left and right, I hopped off the Metro in Clarendon to head home and decided to make one last stop. I thought it was cool that this bar had local art on the walls, and things on the menu like a lamb shank. What the hell, I thought. Maybe they will hire me.

Suddenly there I was, sitting for an interview with Dave Pressley, a culinary school grad who was running the front of the house. Dave said I could never get hired as a bartender, but they needed a server. His honesty was refreshing, and I took the job. In many ways, that interview started my career. I remain grateful that he gave me the time after so many that day had not.

I quickly took on whatever work I could get, other than serving—bar back, host, the occasional bar shift, even security. (Yes, I was a bouncer.) The key in that case was to stay—hide?—behind the head of security, Jeff Mozingo, and just do whatever he said. I managed to remain largely unscathed.

Months later, I was a manager — No. 2 in charge with absolutely no qualifications to be in that role. I had the keys to the bar and the trust of general manager Danny Garcia. It is safe to say that Danny took a big chance giving a 22-year-old kid that kind of responsibility. I tried as hard as I could to not screw it up.