These high-rise residences are as handsome as they come. 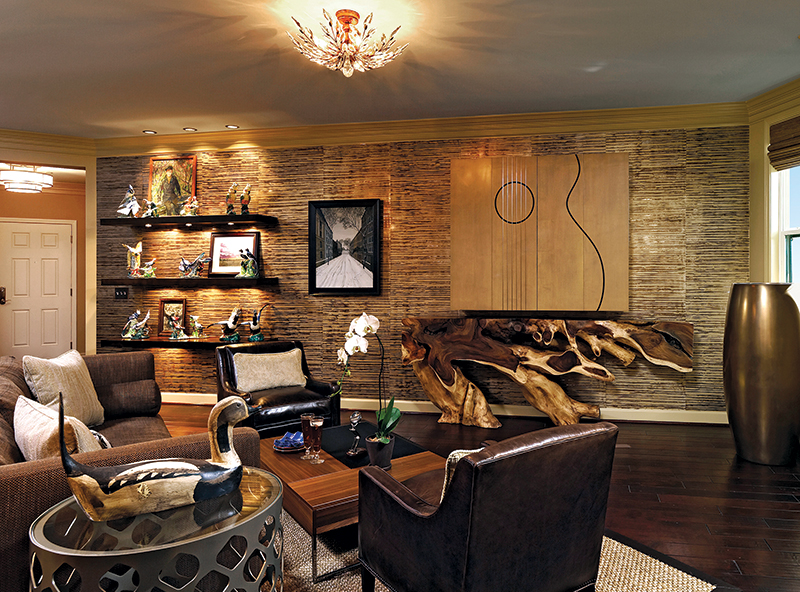 A custom wall cabinet with a guitar motif hides the TV and stereo components in the living room. Photo by Bob Narod.

James Horner saw many compelling reasons to move in 2014 from his McLean home to Dominion Heights, a new four-story condo building that was going up at the edge of Maywood. It was more convenient to the Rosslyn offices of Deloitte, where he’s a partner, and the penthouse unit had nearly as much square footage on its wraparound terrace as it did inside, “which is sort of unheard of in Arlington,” he says.

The building’s energy-efficient and sustainable LEED rating was also a bonus. The only drawback? “It was built to the builder’s specs,” he says, “which weren’t bad, but not very interesting.”

Horner called on Paula Grace Halewski to personalize the penthouse with a design that reflects his love of nature and highlights his impressive collections of wildlife art, sculpture and sports memorabilia. “He’s an outdoorsman, he’s a sportsman,” says the Ashburn-based designer, “so the concept was rustic chic.”

In the main living area, a coppery wallpaper with a texture resembling “sophisticated tree bark” now provides the backdrop for an 8-foot console made from a section of tree trunk, and a maple and walnut-inlay cabinet of Halewski’s design that holds the TV and stereo components. 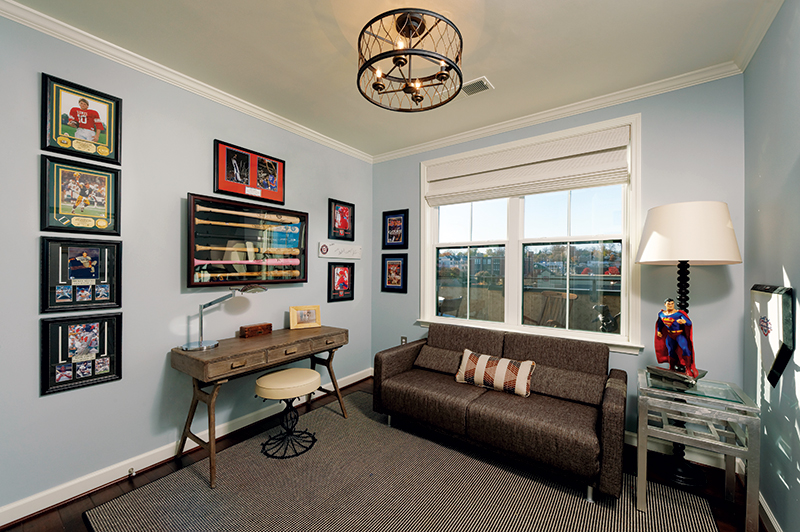 The guest room is all about sports. Photo by Bob Narod.

“Everything in this room is positioned so he can watch television,” she explains. The coffee table’s surface even lifts up and out when Horner wants to eat from the couch.

Contemporary furnishings are grounded with traditional pieces that replicate antiques. As complements, Halewski added woven shades, custom rugs, and eco-friendly leather armchairs that were not chemically treated during the tanning process.

She also painted the ceiling blue like the sky. “I wanted it to tie back to nature—and to birds,” she says.

Indeed, birds are everywhere—in the form of framed color sketches, duck decoys, and a collection of hand-painted porcelain figurines (modeled after John James Audubon’s drawings) that Horner collected from his mother and now displays on lighted shelves.

Meanwhile, an office/guest room doubles as a shrine, of sorts, for sports memorabilia reflecting the owner’s love of the Washington Nationals and his alma mater, the University of Florida.

“It’s just so nice to come home,” says Horner, who travels frequently for his job. “It’s an oasis. You feel like you can walk in and just sit down and relax.”