The owners traded an extra closet for this airy master bath. 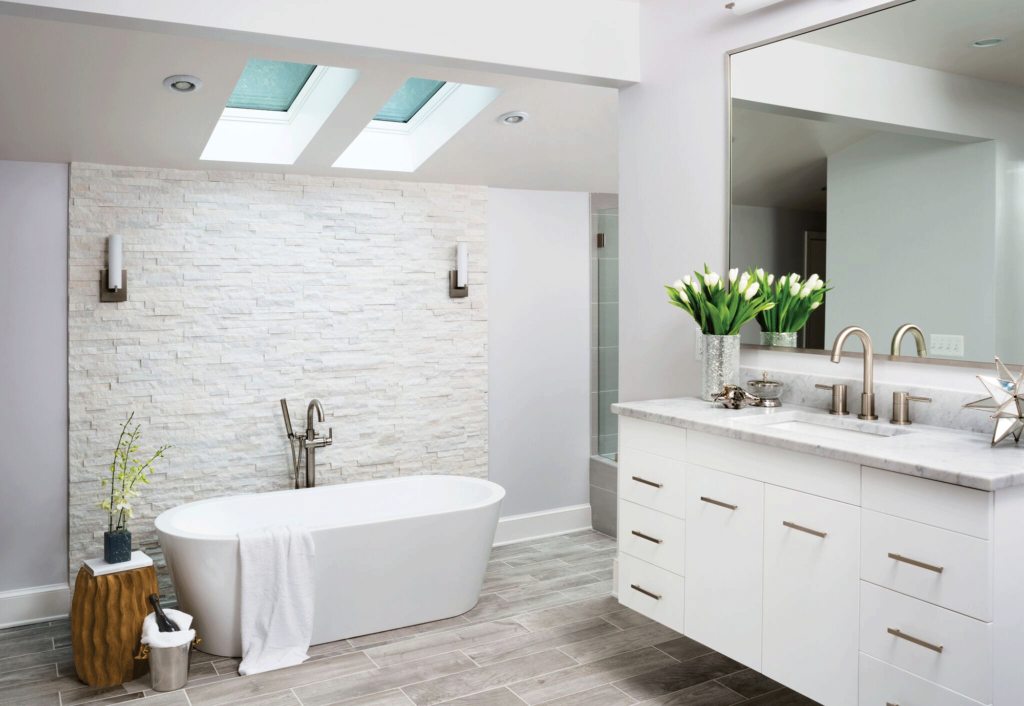 A master bedroom suite with too many closets? An odd problem to have, for sure, but one that enabled the renovation of a cramped master bath in the ’70s-era house Sarah and Daniel Blynn purchased in McLean’s Langley Farms neighborhood in 2016.

Designer Elena Eskandari of Falls Church-based Case Design/Remodeling annexed one of three large closets to expand the tiny bath, giving it a makeover in the process. With its faux stucco walls and orange marble tile, “It felt like we were in a New Jersey Turnpike hotel in the 1980s,” Sarah says, noting that the previous owners had upgraded nearly every other part of the house, save for this one.

The Blynns wanted the new bath completed before they moved in, which put the project on an accelerated track. “One of the most important parts of the design was the space planning,” Eskandari explains, “because three skylights were existing.” The contemporary redesign positions a large, new shower under one of those skylights and a freestanding tub beneath the other two.

Given the time frame, “We had to use readily available materials,” adds the designer. The Blynns opted for a monochromatic look that’s big on texture, shopping at Mosaic Tile to outfit a stone-tile accent wall behind the tub and a shiny, herringbone-pattern glass-tile niche in the shower. (The fixtures and tub are from Ferguson.) “We made most of the decisions in one day,” Sarah says. “We wanted very clean lines—somewhat modern, somewhat simple—nothing fancy or ornate or detailed.”

Nixing the old closet, meanwhile, freed up space for a pair of floating, his-and-hers vanities. The design and construction took just six weeks. Says Eskandari: “It’s one of the fastest projects that I’ve worked on.”