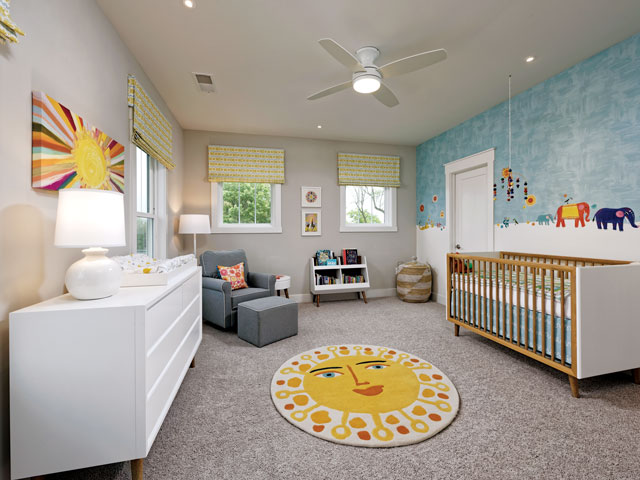 The nursery ideas were floating around in the back of Lisa Wilkinson’s mind well before she became pregnant. They started in 2018 after she and her husband, Brett, purchased some whimsical prints by artist Daria Tessler (animalsleepstories.com) at an art fair while visiting family in Sausalito, California.

Fast-forward a year, and the couple (by then expecting) showed the prints to Arlington designer Melissa Broffman as they contemplated transforming an unused guest room in their Williamsburg home into the baby’s domain. “When I saw those pieces, I immediately thought of the ’50s and ’60s and [pop artist] Peter Max and sunshine,” says Broffman. She made them a centerpiece of the nursery’s gender-neutral design.

Around the same time, the British textile company Villa Nova introduced a new collection of India-inspired prints by storybook illustrator Christopher Corr. “They’re all about wondrous creation and scenes from faraway adventures, like a children’s book coming off the page,” Broffman says.

Corr’s fabric, wall stickers, sunshine rug and “colorwash” wallpaper were seamless complements to Tessler’s art, and spoke to the couple’s love of travel. As an added touch, Broffman asked her wallpaper hanger to cut the bottom of the wallpaper in undulating lines, so the elephants and other animals would appear to be traveling in a caravan across a desert horizon.

Saige was born in August, and the nursery has become a favorite refuge where parents and daughter spend many happy hours.

An added delight, Lisa says, is that the elephants have become the baby’s best friends: “Her face just lights up when she sees them. That was something I didn’t expect, but she really responds to them, which is really sweet.”