A lower level gets a bright, pretty makeover. 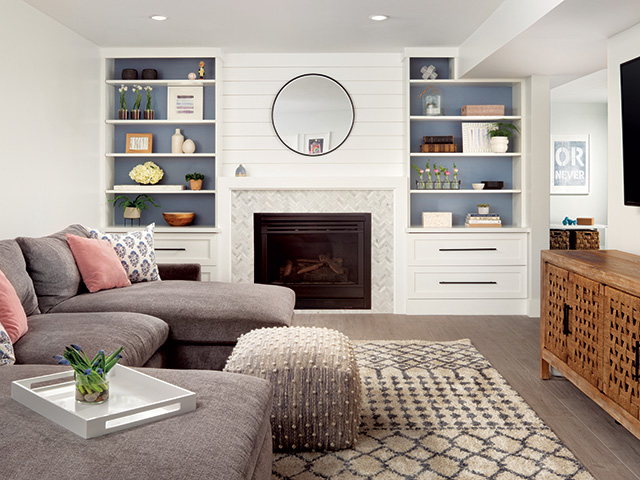 It took an act of God while they were away on vacation for Chandi and Jeff Krohl to finally address the basement. Truth was, the lower level of the Glencarlyn home they’d owned since 2006 was unpleasant even before the water damage. Old carpeting competed with pink terra-cotta floor tiles, the shelves around a gas fireplace looked like they were made of plywood, and Jeff’s home office, where he works as a market researcher, was a “dark, dank place,” Chandi says. The 2018 flood finally forced their hand.

“We decided, Let’s go all in and make it a place that we love,” she explains, adding that their three kids were getting older and wanted a place to hang out with friends.

Once the 1,150-square-foot basement was gutted and primed for a makeover, they enlisted their longtime artist friend and neighbor Kate Hougen, owner of Mira Jean Designs, to use her sense of color, pattern and scale to reimagine the entire lower level—including a family room, a crafts area, a workout room and an improved office for Jeff. “It didn’t function as one cohesive space that people wanted to spend time in,” says the textile and wallpaper designer. 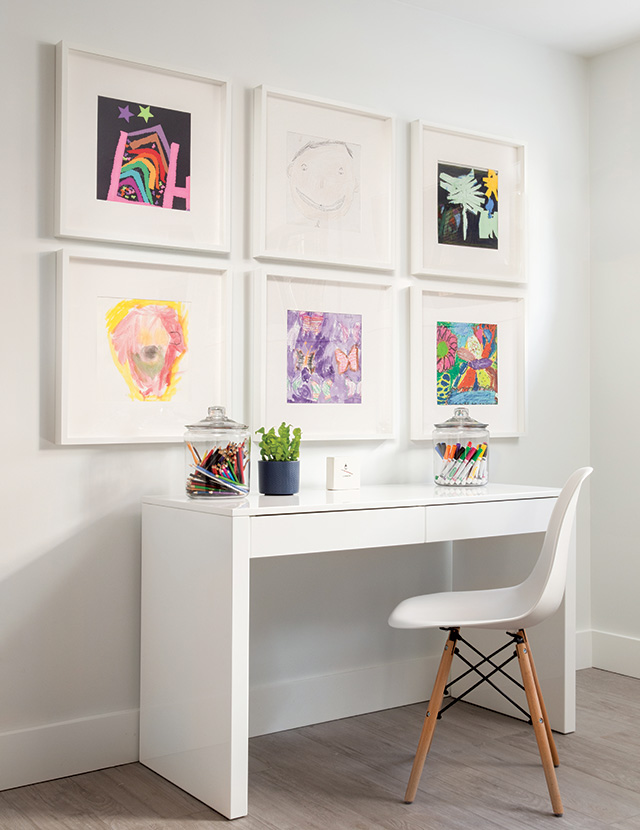 Hougen started with wood-grain ceramic floor tiles throughout, and then turned to custom carpenters Randy and Callie Parz of Parz Designs (siblings, they are based in Falls Church) to create new built-ins and shiplap siding for the fireplace wall. “They treated that whole wall as one entire piece,” she says.

Next came the furnishings, where Hougen’s eye for balance and blending came in handy. A Moroccan rug picks up the basket weave pattern of wood console doors and the pom-pom fabric of an ottoman, while an expansive sectional sofa is a backdrop for lively pillows by designer Caitlin Wilson.

Hougen bought Ikea frames for children’s artwork that hangs above the crafting desk, and collaborated with Connecticut artist Jen Scully to produce paintings declaring “Now or Never” for the adjoining workout area. She contributed one of her own abstract watercolors to the built-in shelving next to the fireplace, and purchased a ceramic piece from Falls Church artist Lindsey Augustine for the mantel.

“We pulled in local artists wherever we could,” she says. The result is a subterranean hideaway that’s a cozy destination rather than an afterthought. “It made us really proud of our home,” Chandi says. “It feels like a really good, comfortable and inviting space.”