Five educators share treasured takeaways from their years on the job. 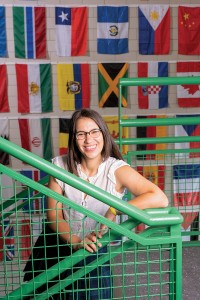 A native of Uruguay, Currás Nieto holds a bachelor’s degree in global affairs and international development from George Mason University and a certificate in elementary education from Johns Hopkins. The former Teach for America corps member is a dual citizen of Uruguay and the U.S. She speaks English, Spanish and Portuguese.

Learning a second language is so much more than just being able to communicate. Languages exist in a culture, and it is equally important to learn about the culture of the language. My students are invested in Spanish because they enjoy learning about Hispanic and Latin American cultures.

My sixth-graders learned to dance merengue as part of their unit on well-being and health. My fifth-graders danced to a famous Dominican bachata song during their unit on food.

During a homeroom activity, I challenged students to compliment each other and was pleasantly surprised with the greetings they shared. One of my students greeted me with: “I love that you make everybody feel included and seen, Señora Currás.” That reinforced the importance of my teaching role and my impact in our classroom community.

Covid made us resort to different kinds of resources. We are becoming more digitally literate, and using the internet to do research. We’re using technology in language learning—adding accents for Spanish words or using autocorrect to help us with our syntax. For an end-of-year project, both grades were tasked with researching different aspects of Hispanic and Latin American culture. The sixth-graders [used online tools] to research an influential person. The fifth-graders researched a typical dish from one of the many Spanish-speaking countries. Then I encouraged them to use tools such as WordReference or Quizlet to create a presentation showcasing their language abilities.

During our last few weeks of class, my sixth-graders were anxious about moving on to middle school. We talked about the importance of feeling sad or anxious, even though as a society we have put a lot of weight on being happy. We cried, we hugged, and I let all my students know they can always reach me through email.
–Tamar Abrams