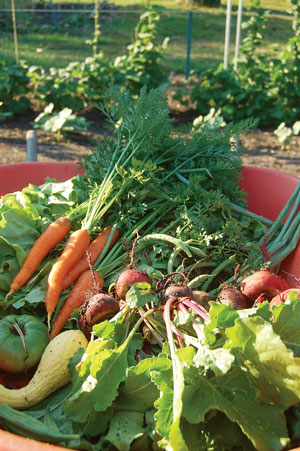 Marney Michalowski swears there’s magic in the soil at the Thomas Jefferson Middle School (TJMS) Community Garden. She has stories to prove it.

Like the one about the little boy who claimed to hate green beans—until he cautiously sampled one, and then another, while volunteering in the garden with his parents.

Michalowski, who chairs the school’s PTA Garden Committee, says she’s also seen middle school students get excited about okra (yes, okra) on this 600-square-foot plot of land, where grandparents garden alongside their grandchildren and teens who live in high-rise apartments take ownership of tiny seedlings.

Located on school property, the garden plot was first cleared and planted in 2010 by Girl Scout Cadette Troop 557 as a community service project that earned the Girl Scout Silver Award. The garden has since been integrated into the TJMS International Baccalaureate (IB) academic curriculum, prompting students to explore how food impacts their lives, community and environment. Hay bales around the perimeter can be moved to form an impromptu outdoor classroom.

Each new planting season brings excitement to TJMS, a racially, ethnically and culturally diverse school, where half of students qualify for free or reduced lunches and where garden fliers are printed in Spanish, Amharic and Arabic. Seeds donated by community members lend a global flavor and an element of surprise to each summer’s harvest. 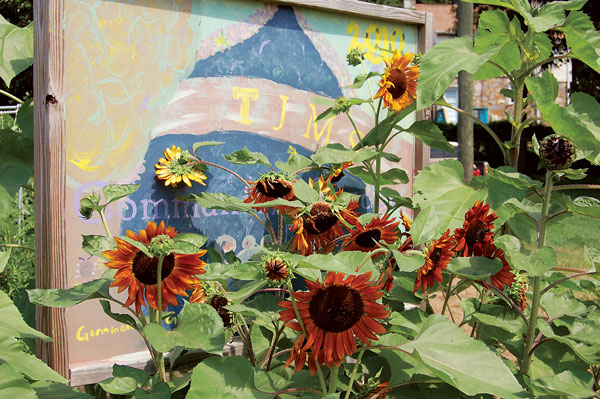 “One year we grew Guatemalan blue banana squash,” Michalowski recalls. “It was bluish on the outside and orange on the inside—a beautiful and sweet-tasting squash.”

Volunteer lead gardener John Adair offers tours to first-timers, pointing out spots where seedlings failed to emerge and where wild and tasteless “mock” strawberries somehow sprouted in lieu of the traditional ones.

That’s when a mother and son ride up on bikes, arm themselves with hoes and begin weeding.

The woman explains that a portion of the produce is donated to the Arlington Food Assistance Center (AFAC), which feeds roughly 2,000 local families every week—including hers. To date, the little garden has yielded 900 pounds of fresh produce for the nonprofit’s Plot Against Hunger program, with healthy choices such as kale, corn, pumpkins, watermelons, green beans, radishes and tomatoes.

For volunteer information, visit www.apsva.us/Domain/1676 and click on “Jefferson Garden” in the left margin. Or email tjms.garden@gmail.com.