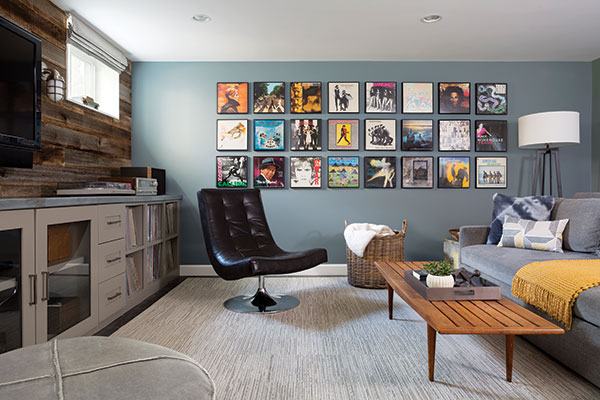 When Suzanne and Mark Manlove put an addition on their Alcova  Heights home in 2007, the excavators left a happy byproduct. Underneath their new family room and kitchen was a larger unfinished basement, which Mark quickly claimed as his own. Soon it became a refuge where he and other neighborhood dads could play darts and listen to Mark’s extensive record collection.

By 2014, Suzanne was ready to finish and decorate the basement, but Mark had his misgivings. “He was really worried he would lose his space,” says Suzanne, an interior designer and owner of Arlington Home Interiors. “He thought I would make it ‘Suzanne-y.’ Instead, I treated him just like a client.”

Directing her husband to look at online resources such as houzz.com for inspiration, she took note of what he liked. In the end, a “modern vintage” style emerged, with accents of zinc metal and reclaimed barn wood.

Now the subterranean zone suits everyone in the family. Mark still has plenty of room for his vinyl collection and stereo components (not to mention the dartboard), and there’s ample space for their kids, Sean, 16, and Natalie, 13, to hang with friends from Wakefield High and Thomas Jefferson Middle schools.

But the spirit of the original underground lair remains. The focal point is a gallery wall of framed album covers. “It just pulls people in, and they start sharing music memories. It makes you feel like you’re really sharing your space—and sharing a part of you,” Mark says. “I love that the room still has its ‘hangout’ appeal. It just has a really good vibe.”