Once It Was Arlington’s Hottest Holiday Shopping Destination 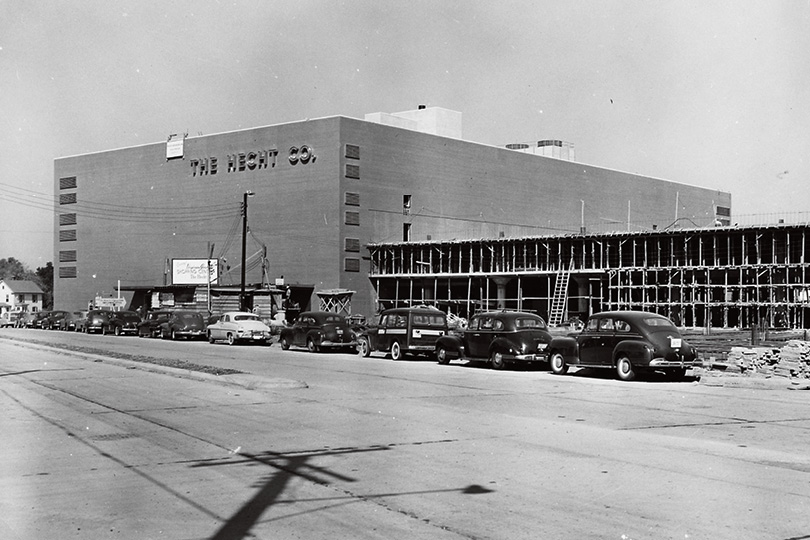 Hecht’s in 1951, during construction. Photo courtesy of the Center for Local History, Arlington Public Library.

In the mid-1970s, if you lived in Arlington and wanted to see a concert, there’s a good chance that Ana Maria Cano sold you the ticket—and probably for less than 10 bucks. Long before fans could open a Ticketmaster app, Cano worked the ticket counter inside The Hecht Co. department store in Ballston, a predecessor to the Macy’s that now bookends Ballston Quarter.

“One of the concerts that drew long lines was Led Zeppelin in 1974,” recalls Cano, who now lives in Colombia. “When I got to the store there were so many people. Those tickets sold out in three hours.”

Hecht’s was already a well-known mid-Atlantic retail empire when it opened the Arlington store to great fanfare on Nov. 2, 1951, as the crown jewel of Parkington, a $15 million shopping center that helped usher in an era of car-dependent convenience. As the company’s second suburban venture (the first was in Maryland), the new Hecht’s transformed what had previously been a sandlot ballpark into a five-level shopping hub, complete with a 2,000-spot parking garage. “Magnificent Vista of Fashion!” boasted an ad the company placed in The Evening Star.

On opening day, an estimated 60,000 shoppers rushed in to sample the store’s 147 departments—including furnishings, luggage, a candy counter, maternity shop, bridal consultant and a large basement restaurant known as the Virginia Room. In his remarks, company president Samuel M. Hecht declared the Arlington store “the most magnificent and certainly the largest suburban department store in the East.”

In the decades that followed, the store became famous for turning its façade into a giant message board, with community announcements such as “School’s Open…Drive Safely,” “Our Friends Don’t Play With Matches” and “Let’s Stick Together…Use Christmas Seals.”

For local teenagers and young adults, Hecht’s was a popular place to work, too; students could walk from nearby Washington-Lee High School (now Washington-Liberty) to start their shift or grab a snack.

Parkington was redeveloped as Ballston Common Mall in 1986, and in 2006, Hecht’s was rebranded as Macy’s. Plans are now underway to replace the Macy’s with a glass-walled apartment tower with ground-floor retail—drawing shoppers to the very same corner where Hecht’s showed everyone how it was done.

When Metro Came to Town

Mile Markers: A Timeline of Pivotal Points in Arlington History