His CSA Farm Once Fed 500+ Families

Now Arlington native Leigh Hauter wonders if this season will be his last. 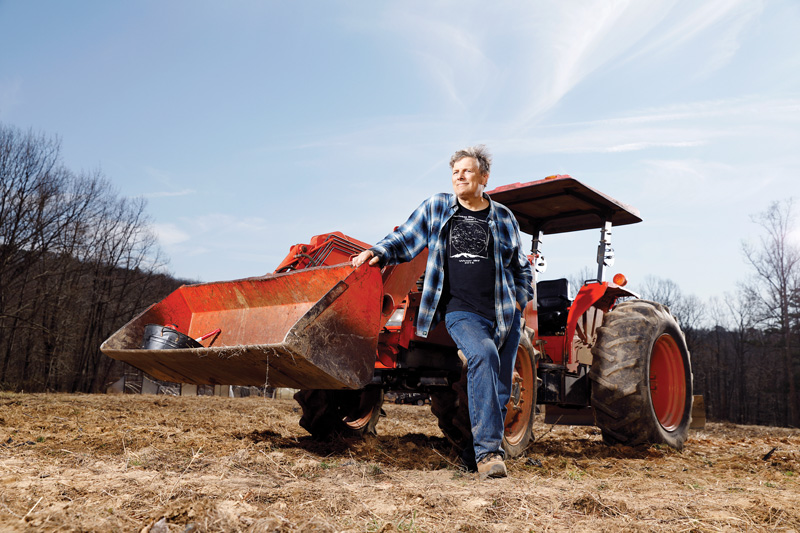 Leigh Hauter on his farm in Fauquier County. Photo by Jonathan Timmes.

One day a week, from June to October, a white van pulls up in Arlington’s Benjamin Banneker Park, and a seasoned 69-year-old man emerges, setting out a series of plastic bins on the lawn.

He scribbles numbers and information on a whiteboard that he leans against a tree, and then he waits. When a couple dozen people show up between 5:30 and 6:30 p.m., they know what to do. They pluck one or two eggplants or peppers from one bin, a handful of some new variety of lettuce, like mizuna, from another, and “AYCE” (all you can eat) of something else, like basil.

They might collect mustard greens, potatoes, squash or kohlrabi. Some will pick up a dozen eggs. Occasionally they take home a jar of honey.

The man with the produce is Leigh Hauter, and all of these goods come from Bull Run Mountain Farm, the 25-acre farm he started 20 years ago in Fauquier County, about 35 miles west of Arlington. It’s believed to be the first farmer-owned CSA (community-supported agriculture) operation in the D.C. area.

Hauter, who grew up in Arlington’s Waverly Hills neighborhood and attended Washington-Lee High School (soon to be renamed Washington-Liberty), runs his operation as an “old-time CSA”—for the benefit of its shareholders only, not selling produce anywhere else.

On the day of my visit to the farm, in winter, he’s bundled up in a coat inside his stucco farmhouse, waiting for his heating fuel to be delivered. As a guy who has been cultivating seasonal, chemical- and GMO-free produce since before that kind of food was easy for consumers to come by, he seems a bit antsy in the off-season.

His CSA once fed 500 to 600 families. Now, as part of a nationwide decline in CSA memberships, he has only 50 families left. Local Harvest, an online resource for small farm operators, attributes the drop-off to “the rise in online grocery sales, meal kit services, and more and more people eating out or getting by on snacks instead of actually cooking…[and] the ‘Amazonification’ of the food system.”