Ever had a hunk of bread change your life? Carolina Garcia did, in France, while she was in graduate school. As she job-hunted in D.C. after finishing her master’s in economics in January 2010, she found that chewy, crusty baguettes—the kind she remembered—were as hard to come by as the right job offer. So she decided to return to France and learn to make them herself under the tutelage of award-winning Parisian boulanger Arnaud Delmontel. Et voilà, LeoNora Bakery was born, specializing in baguettes, chouquettes, madeleines, croissants and more. Based out of Garcia’s Arlington residence, the business (named for her mother and aunt) delivers direct to clients’ homes and distributes through select retailers, including the Whole Foods in Foggy Bottom, D.C.; Arrowine in Arlington; and Au Domaine in Alexandria.

At press time, Garcia was aiming to open a bakery at 1108 N. Irving Street in Clarendon in early October. The shop will give customers a chance to sample her handiwork—perhaps with a café au lait at the counter—without having to meet the minimum $50 order required for home delivery. 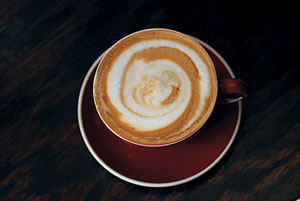 Boccato Gelato & Espresso is finally getting some space to pursue the second part of its name, with the acquisition of 3,100 square feet adjacent to its tiny location on Wilson Boulevard. Boccato Lounge, a new coffeehouse occupying the former El Chaparral market, will offer tables, chairs and comfy couches—an improvement over makeshift sidewalk seating—along with pastries from LeoNora Bakery and savory empanadas courtesy of Julia’s Empanadas. Owners Rob Shelton and Cristian Velasco are also planning to roll out a bargain that’s proved popular at their Old Town Alexandria location: the $1 coffee/$2 espresso happy hour. 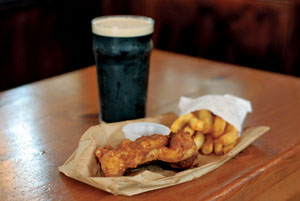 Fish and chips and…

With the opening of a second location in Arlington (at Columbia Pike’s Penrose Square), Old Town Alexandria favorite Eamonn’s is expanding in more ways than one. The cod and chips will be there, of course, as will the seven secret sauces. But an early glimpse at the new menu reveals some new comfort foods to boot.

Among the “other stuff” in Arlington will be sausage and pastry, meat pies, hot biscuits with corned beef, Guinness beef stew and shepherd’s pie. (So, basically, still not much for vegetarians.) At press time, restaurateur Cathal Armstrong was predicting a winter 2012 opening on the Pike.

Eamonn’s: A Dublin Chipper, at the corner of Columbia Pike and South Barton Street, Arlington, www.eamonnsdublinchipper.com

American Tap Room is up and running in the former Sette Bello restaurant space (3101 Wilson Blvd.) offering dozens of beers on tap and in the bottle, as well as a wide-ranging casual American menu. Management was looking to make the site more visible than the space’s former occupant, and the fire engine-red walls seem to have done the trick.

Another local spot for beer-lovers is branching out into new territory as Arlington’s Galaxy Hut aims to open its second location at 709 W. Broad St. in Falls Church in early November. It’s taking over the former Stacy’s Coffee Parlor space in a small building it will share with CD Cellar and a psychic. Watch out, Mad Fox Brewing Co.­—there’s a new beer monger in town.

Speaking of mongers, at press time, Del Ray cheese monger Cheesetique was getting ready to open new digs in Shirlington at 4056 Campbell Ave. The shop takes over for The Curious Grape, which announced it would not be continuing at the location earlier this year.

Columbia Pike favorite Lost Dog Café (a spin-off of the original in Westover) has already outgrown its space and is expanding into an adjacent storefront. The added space will give the restaurant 30 percent more seating and a larger kitchen to accommodate the steadily increasing business it has enjoyed since it opened in 2009, according to the franchise’s owners.

There was no word at press time on whether the addition would give the Dog room for more beer coolers—more than 150 bottled beers line the entryway to the current space at 2920 Columbia Pike—but it will allow for a comfortable bar space that’s “more chill,” according to general manager Jim Barnes. At press time, the expansion was expected to be completed by mid-October.

Rumors circulating earlier this year proved true, as grizzly Courthouse pub Kitty O’Shea’s (2403 Wilson Blvd.) has closed. Owner Danny McFadden says his lease included an option to stay until 2015, but adds that he couldn’t reach terms on that option with the landlord. “Even when I offered to pay more rent, he just made it personal,” McFadden said as he was cleaning out Kitty’s in late August.

The pub closed Aug. 27, and McFadden, who also owns Tenleytown pub Murphy’s Law, is looking for a new space to reopen in Arlington. At press time, real estate listings showed that the old space was still for rent. 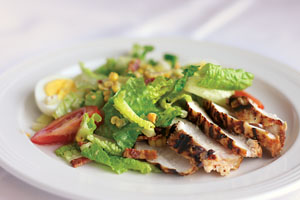 Satisfying the cravings of a health-conscious lunch bunch hasn’t been a problem for Rabbit, the new salad and grill place in Clarendon. Since its opening in July, the trendy eatery has enjoyed a fairly steady midday rush—thanks, in part, to the innovative menu designed by consulting chef Katsuya Fukushima, formerly an executive chef with José Andrés’s ThinkFoodGroup and head chef at Café Atlantico in Washington, D.C.

Its biggest hurdle? Getting people to think of a salad as something for dinner. With a name that plays on “rabbit food,” there’s been some confusion. “The first thing anyone hears when they think salad, they think lunch,” says proprietor Aaron Gordon, who also owns Red Velvet Cupcakery and the yogurt shop TangySweet. It’s why he’s been emphasizing the grill portion of the menu.

Rabbit does have a lot more than salad. Gordon’s favorite non-green item is the Cuban sandwich laced with super-spicy mustard and grilled to crunchy perfection. And it’s hard to pass up the stick-to-your-ribs steak plate, which comes with a giant pile of butter-laden smashed potatoes.

Come winter, look for additional choices, including hot and hearty soups, as well as warm elements for some of the signature salads. And if you’ve saved room for dessert, there’s always the Red Velvet cupcake counter in the corner of the store.

But if you’re watching your figure or wanting to sharpen your eyesight, you can’t go wrong with the light and tasty namesake dish (Rabbit salad) featuring carrots three ways, snow peas, pea sprouts, mixed greens and shredded mint in a citrus dressing.