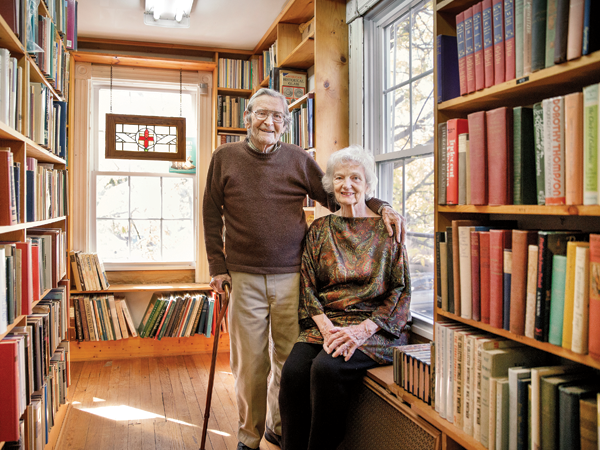 Nothing is new at Bookhouse. Not the house itself, a two-story Victorian with a wide front porch just off Wilson Boulevard, built in 1900. Not the 25,000 books shelved inside, some of which were published while Shakespeare was writing plays. And definitely not proprietors Natalie Hughes, 84, and her husband, Edward, 95, who still tend the store they launched together 40 years ago. That’s just the way their loyal clientele likes it.

Inside the shop, the air smells like wood and old paper. The skinny stairs to the second floor creak, the old windows rattle when the wind gusts, and very occasionally, the bell hanging over the back door jingles to signal the arrival of another customer.

Bookshelves cover every inch of wall space in a twisting maze of former bedrooms and bathrooms, including the normally empty spots over doorways and under windows. Antique children’s books beckon from the paneled walls of the hallway. Among the titles is A Ticket to the Circus: the stupendous story of the incredible Ringlings in all its amazing detail from humble Wisconsin beginnings to world-wide glory. Around the corner, in the travel section, rests English Church Brasses. Nearby sits a spelling primer only five inches high, its paper cover worn soft as velvet, with the date January 1864 handwritten on the flyleaf in spidery brown script.

It all started in 1968 when Natalie, on a whim, bought 3,000 books at a liquidation sale. A divorced mom raising four kids, she got the lot for all the money she had in her wallet—four $10 bills. “I honestly thought I bought those books to read,” she marvels.

Instead, she used the stash to open a small book shop in the building where she worked as a secretary in Wheaton, Maryland. By 1973, she’d moved her collection to a house in Clarendon, where she lived upstairs with her teenagers and sold books in the store below.

One day Edward, a bachelor who had just retired early from the Federal Highway Administration, walked in looking for books on garden design. Pretty soon, he was taking Natalie on a walk to see the Virginia bluebells in McLean’s Turkey Run Park. “We started going walking,” she says, “and never stopped.”

Within a year, they got married and bought the house in Cherrydale where they still live today. In 1975, they moved Bookhouse to 805 North Emerson St. in Arlington’s Bluemont neighborhood.

Although he meant to buy only one book on the day he met his bride-to-be, Edward figures he’s purchased more than 50,000 titles since. At first, the couple stocked their shelves by scouring auction houses, driving to Freeman’s in Philadelphia nearly every week in their Mercury sedan. One lucky day, they found themselves bidding on the personal library of Nobel Prize-winning novelist Pearl S. Buck.

“My wife bought the first 19 lots,” Edward recalls, “and I had to say to her, ‘We don’t have room for these in the car!’ ” Luckily, Natalie ignored his advice to stop bidding. They borrowed a Volkswagen bus “with lousy brakes” from Natalie’s sister to haul the books back to Arlington. “The [collection] turned out to be surprisingly valuable,” Edward says, and the store was up and running.

There were more shrewd purchases to come. A Dashiell Hammett novel, bought at a yard sale for a quarter, sold at auction for $1,300. Edward picked up a bound volume of Times and Seasons, an early Mormon newspaper, at a church fair, and sold the $9 book online for $10,000.

But the couple’s all-time luckiest purchase was an ordinary-looking volume they bought for $15 at a moving sale. After a great deal of research, they discovered that the copy of Alice’s Adventures in Wonderland was actually a first edition. They gave it to Natalie’s daughter, Lee, who sold it to a book dealer for $16,000. At 1980s prices, the book put her through college.

Today, Edward has stopped buying books and Bookhouse is finally closing. It’s been closing for several years, Natalie confesses—but there’s still the problem of the 3,000 books in the shed, the 7,000 in the outbuilding and the 25,000 inside the store itself, many of which focus on history or genealogy.

“I love every book,” she says, “and I will stay here, as long as I can, to try to find a home for each and every one.”

It’s not clear how long that will take. A few valuable volumes rest in off-site storage, including a collection of poems published in Venice in 1579. The paper, now more than 400 years old, remains smooth and creamy to the touch, the illustrations of sea monsters and skeletons still crisp and black on the page. Treasures aside, a typical book at the shop goes for about $20—often less as Natalie tries to match well-worn editions with new owners and bundle them out the door. (The shop is closed on Tuesdays, but otherwise open daily from 1-6 p.m.)

Natalie and Edward still go walking when they can, sometimes on the Washington & Old Dominion Trail, sometimes in their favorite park, Lubber Run, where they like to stroll by the creek. They once had ambitions to hike farther afield.

“I used to want to travel,” Natalie remembers. “Edward and I went to England one year, and we decided we would go back each year and walk through a different county. And we never got back again!”

Truthfully, she says, it’s hard to tear herself away from the store—and the books. “This is still my favorite place in the world to be. And I’m going to stay here as long as it is.”

Laurie McClellan loves bookstores and libraries, and once dreamed of opening a bookstore-café called The Book and Bite.