When his trumpet was stolen, a Falls Church music store donated a replacement. 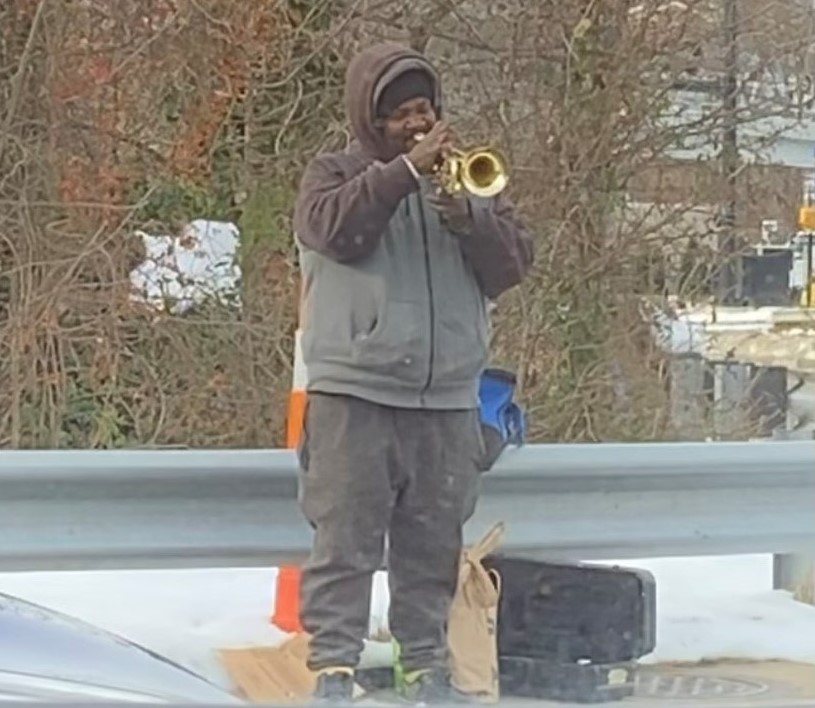 On Thursday, a musician experiencing homelessness near Falls Church received a trumpet from Foxes Music after his own instrument was stolen. (Photo courtesy of Jane Posner)

Around 9:30 Thursday morning, Marj Herbert was waiting for her colleagues at Foxes Music Co. to arrive for work when she got a call from local violin teacher Jane Posner. The violinist told Herbert that a man standing at an intersection near East Falls Church was in need of a trumpet.

Posner, who says she had seen the musician, Melvin Simpson, at the intersection of Langston and Washington Boulevards many times before, drove with her daughters to Foxes Music with the intention of purchasing a trumpet for him. Though the shop hadn’t opened for the day, she called and related the story to Herbert.

Herbert, who co-owns the Falls Church instrument depot and music school, immediately found a used trumpet, headed to the intersection and greeted Simpson with the gift, as cars whizzed past.

“He was crying, he was very overwhelmed. And I started crying too, so I wasn’t much help in the conversation department,” says Herbert, who served as a band teacher for nearly 40 years at private schools in Northern Virginia. As she handed Simpson the trumpet, she checked to ensure it had all its necessary components. “I may even go back and ask him if that was OK, because I have other trumpets,” she says.

Arlington Magazine has not been able to connect with Simpson. In 2015, he told Hill Now, “I just try to entertain so I can make it through my day until I can find a regular job. … I needed to do something to bring in some income, so I just play my trumpet.”

Simpson is a self-taught trumpeter and learned his entire repertoire by ear, according to the article, after playing brass instruments in the marching band at Eastern Senior High School in D.C.

After Herbert left Simpson with his new instrument, Posner and her children watched and listened from across the street as he tried out the horn. Songs such as “When the Saints Go Marching In” and “Reveille” filled the cold air, Posner says. Before they left, Simpson waved to his mini audience.

This story has been updated with additional details about Simpson.