In the Age of Fallout Shelters

During the Cold War, they were everywhere in Arlington. 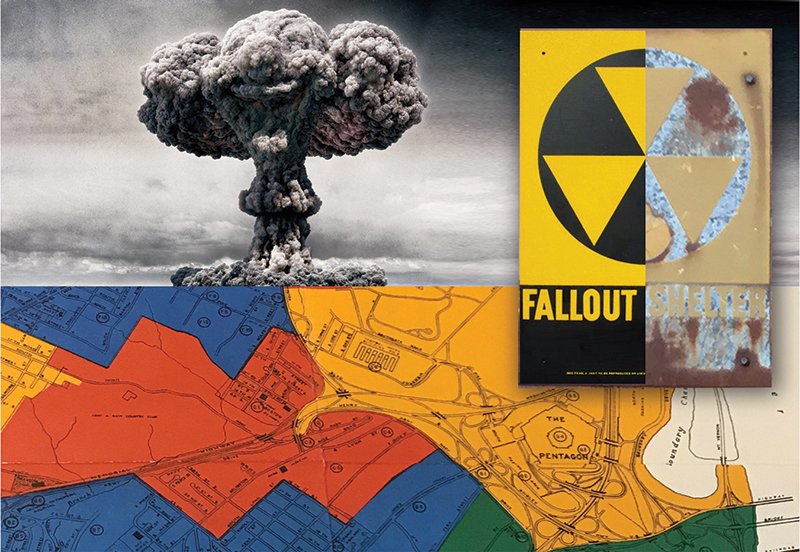 Near a back-door entrance to Claremont Elementary School is a rusty sign affixed to the building’s brick exterior. Its three-triangle symbol is instantly recognizable to anyone of a certain age, harking back to a time of duck-and-cover drills and nuclear anxiety. The lettering has faded, but one can still read what it says: Fallout Shelter.

During the early days of the Cold War, fallout shelters could be found in every corner of Arlington County—in school basements, beneath large apartment complexes and government buildings, and buried in suburban backyards. Brick, concrete or cinder block, these cramped spaces confirmed the scary fact that the United States was under constant threat of a nuclear attack.

On June 14, 1954, millions of Americans in the bigger U.S. cities participated in the first nationwide civil defense drill, taking cover in underground shelters and subway tunnels while President Eisenhower was whisked away by helicopter to an undisclosed mountaintop location. When it was over, the government deemed the 10-minute drill a success, although a study later conducted by federal officials determined that 12 million Americans would have died in a real attack.

Following a May 1961 speech to Congress in which President Kennedy called for ramped-up civil defense efforts, federal workers fanned out across the country to inspect and take stock of America’s fallout shelters. That’s likely when Claremont Elementary’s bunker got its designation and distinctive sign.

Arlington’s proximity to the Pentagon and D.C. heightened its standing as a potential target. “It’s safe to assume that the D.C. metropolitan area had a higher rate of both public and private shelters,” compared with other locales, says Doug Harsha, assistant curator at the Cold War Museum in Warrenton, “because government employees were very aware of the potential effects of nuclear bombs. The threat was absolutely real here.”

In 1968, the Northern Virginia Regional Planning Commission published a series of maps pinpointing the locations of public shelters in the area. One map that’s now housed in the Arlington Public Library’s Center for Local History indicates that there were more than 150 shelters countywide, scattered in post offices, fire stations, libraries, schools and random places like the J.C. Penney on Wilson Boulevard (now the entrance to the Clarendon Metro station), several Peoples Drug Stores and the former “Coco’s Italian Restaurant” on Columbia Pike.

Arlington County library archivist Emily Curley estimates that less than a third of those shelters are still around today. “A lot of places on the map don’t exist anymore,” she says. “The ones that do [have] other uses.” Older apartment buildings may use them as laundry facilities or bike storage.

While the maps did help to quell citizen unease, they may not have mattered. Few shelters could have sustained a direct hit on a major nearby target like the Pentagon.

“A significant portion of the shelters would have had no real effect” in mitigating the blast or the effects of radiation had a bomb hit Arlington or D.C., Harsha says. “But if it could [bump] the survival rate from 5 percent to, say, 20 to 25 percent, it was worth it.”

Luckily, it never came to that.