Dive into ceviche, pisco sours and Peruvian culture at this intricately designed restaurant. 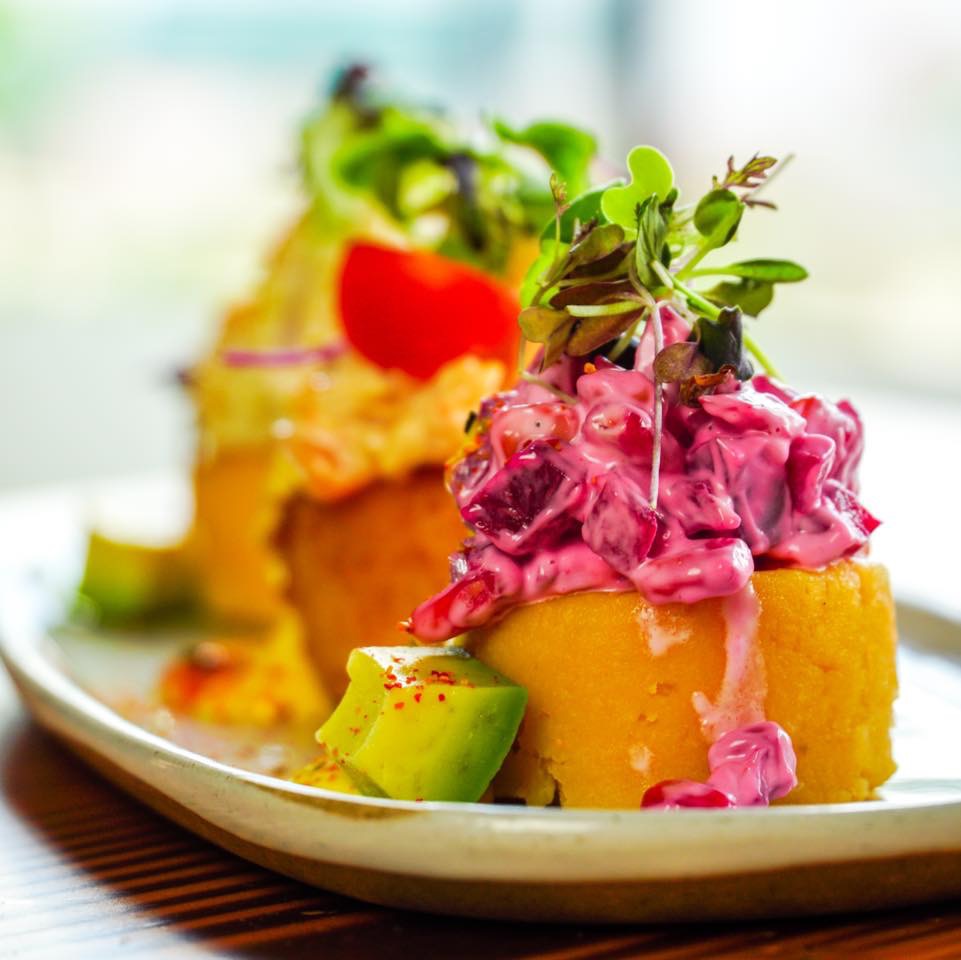 The menu at Inca Social is loaded with fresh takes on traditional Peruvian food, from causa to saltados. (Photo by Erich Kottke)

A few years ago, local entrepreneur Fito Garcia came up with an idea for a restaurant concept he could sum up in two words: Inca Social. Inca, because “Peruvian food is a lot of fusion, and the Inca Empire was more than Peru,” Garcia says, and social, which suggests a gathering space where a meal can easily turn into an event.

“Whenever … Latin families come together, even if it’s like ‘so-and-so’s coming over,’ music’s playing, it’s an experience, it’s a social gathering,” he says. “So the idea was really to create a hangout for the community … using our food, the Peruvian food, but allowing other Latin cultures to be involved.”

The eatery, which Garcia co-owns with Augusto Campo and executive chef Michael Ciuffardi, opened its first restaurant in Merrifield in 2019; the second location opens on Tuesday, Dec. 21 in Rosslyn. 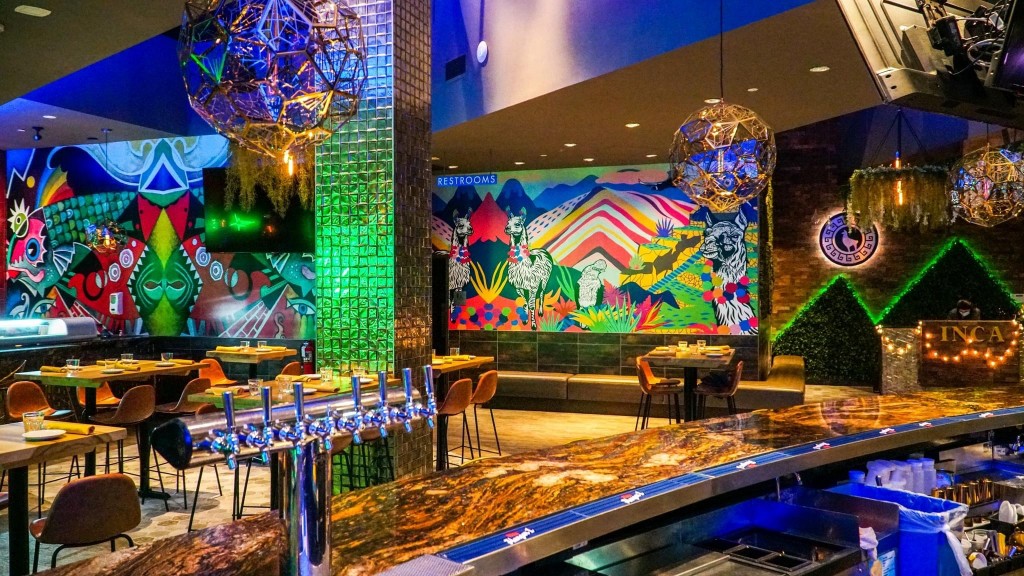 Garcia, who also co-owns beer garden Courthaus Social and Fairfax taproom High Side, moved from Puerto Rico to Oakton when he was 6 years old, by way of Mexico and Peru (the latter of which he and his family visited annually for much of his life). When the idea for Inca Social was percolating, the entrepreneur was just starting a family and reluctant to begin a new venture. But when he found the right space near the Dunn Loring Metro, he and his business partners went for it, opening Inca Social with help from his mom’s recipes, a kitchen manager and a few menu consultants.

“I didn’t want to work with a chef because chefs are usually hard to work with,” Garcia says, while sitting in a booth in the Rosslyn location, before translating the joke into Spanish for Ciuffardi across the table, who flashes a little grin. Garcia met the Peruvian-born chef in 2019 at a planning meeting for the D.C. food event Taste of Peru, and after the first year, the Inca Social operating team brought him on. A former student of well-known Peruvian chef Gastón Acurio, Ciuffardi serves as co-director of the Peruvian American Chefs Association and owns two eateries in Peru.

While the pandemic initially derailed their plans to expand, it also inspired a successful pivot toward to-go food. The Rosslyn restaurant, formerly home to Kona Grill, has a spacious kitchen, ideal for a catering business and ghost kitchen for a Latin American concept, both of which Garcia hopes to get off the ground in 2022, he says. 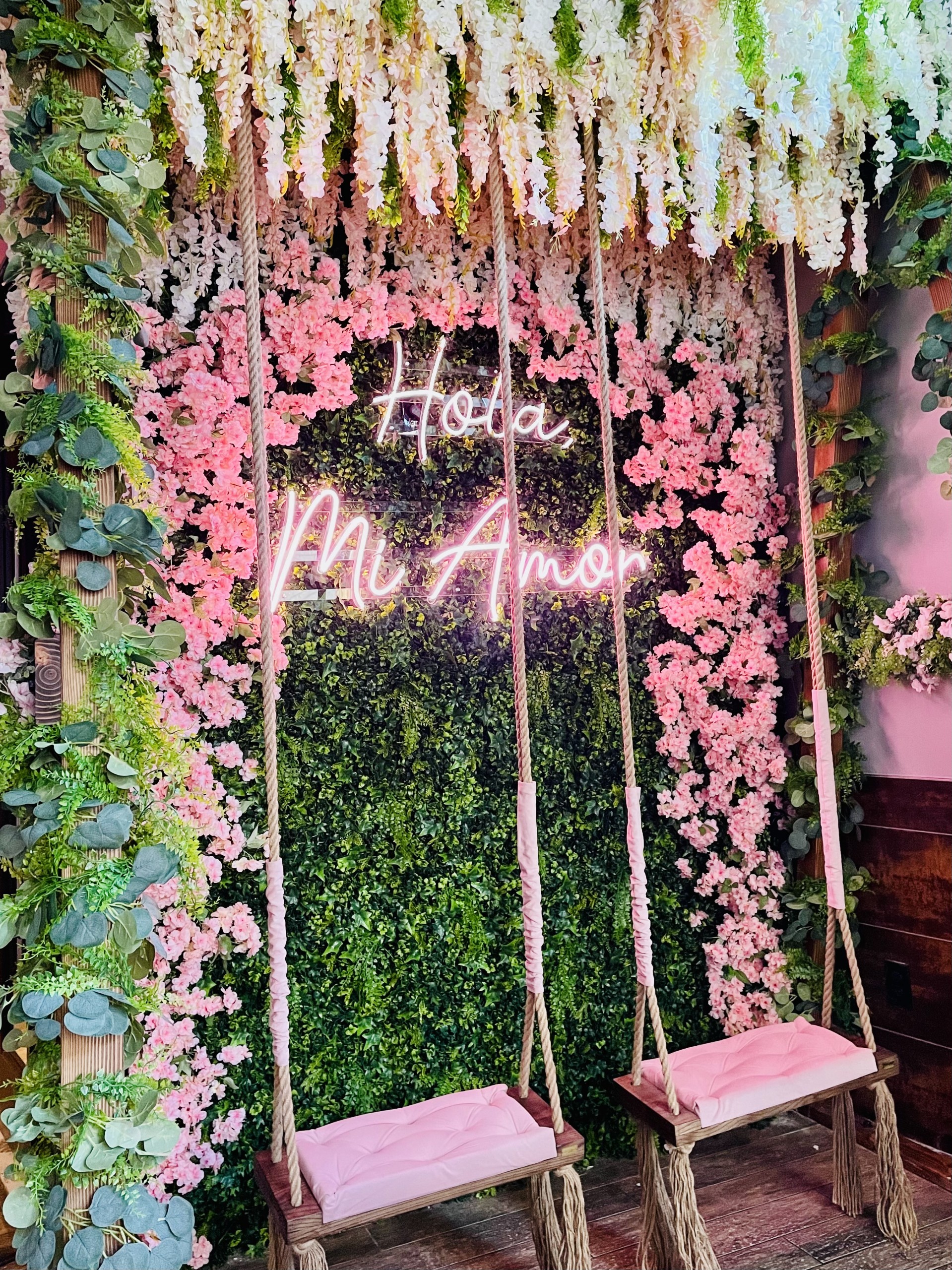 Take a swing while you sip your drink just steps away from the bar. (Photo by Eliza Tebo Berkon)

On the menu, you’ll find traditional Peruvian fare, such as causa, saltados and arroz con pollo. Garcia and Ciuffardi note several ways in which their preparation diverges from the norm. Empanadas come fried, the lomo a la huancaína is served with parmesan and pasta or risotto, and stir-fried quinoa accompanies the Inca chicken. Unique to the Rosslyn location is a sushi and ceviche bar.

In addition to a dozen cocktails, wine and craft beers, the eatery sports a pisco bar. Sample the South American brandy in one of five pisco sour varieties, including passion fruit and the purple-corn-based chicha morada. And consider sipping your beverage mid-air—the bar area is home to a pair of swings suitable for snapping a memorable photo or tapping into your playful side.

“We like to be a little bit more hip in the sense that we want you to feel like you’re in Miami or New York, in Chicago, California when you walk into an Inca Social,” Garcia says. “You’re going to come here to eat the best food, drink some of the best cocktails and have the best vibe.” 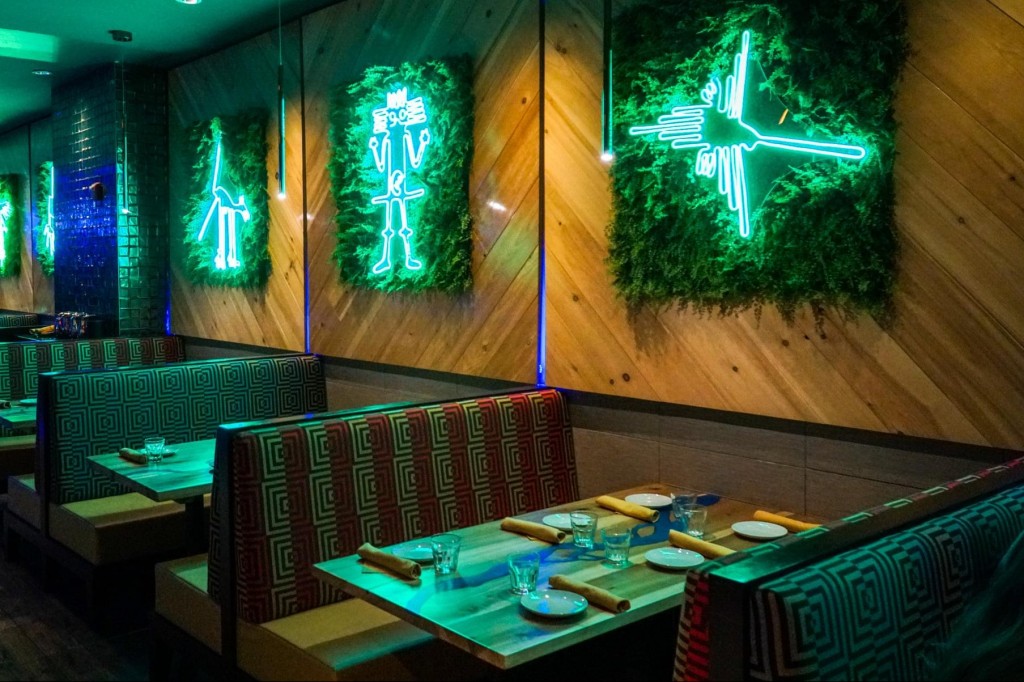 Neon lights in the dining room mimic the Nazca Lines, which are geoglyphs some two millennia old. (Photo courtesy of Inca Social)

The Rosslyn restaurant—designed by Northern Virginia’s Jennifer Neyra—features visual nods to Peruvian culture and will soon host pop-up opportunities for Peruvian American shop owners. Copper touches connote the Incan sun god; cherry blossoms signify Japanese Peruvian cuisine, or “Nikkei”; and the tabletops have a design that, when assembled together, form the contours of the Amazon River.

As we wrap up our conversation, Garcia points out the neon lights along the wall behind us. They are likenesses of various creatures, mimicking the style of Peruvian geoglyphs some two millennia old, known as the Nazca Lines.

“We want to show off Peru,” Garcia says. “There’s so much to know. There’s things that I don’t even know about the country that I’m still learning, just like we all are.”

→ First Look: The Salt Line Is Open for Business in Ballston

→ 11 Arlington Bars and Restaurants Where You Can Order Seasonal Cocktails