The path from incarceration back to society is tough. Elizabeth Jones Valderrama lights the way. 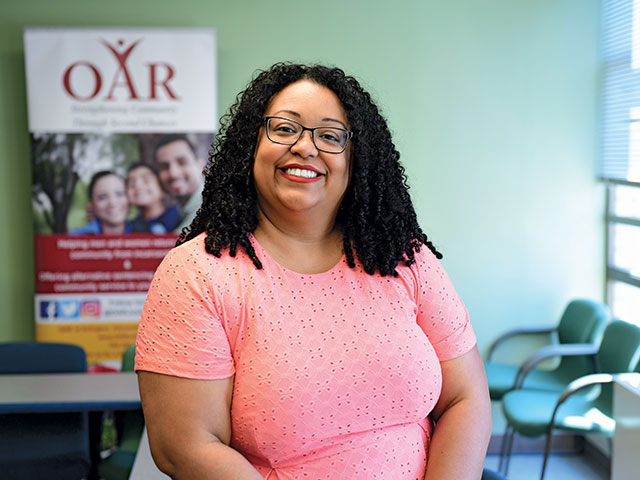 Lives in: Herndon with her husband, who is a police officer, and six cats

Current Job: Executive director of Offender Aid and Restoration (OAR) of Arlington, a nonprofit in Courthouse that supports area people who are court-ordered to complete community service and are/were incarcerated at correctional facilities

Bio: After emigrating from Costa Rica with her family at age 9, Jones Valderrama graduated from Washington-Lee (now Washington-Liberty) High School in 1998 as the school’s first Hispanic/Latina valedictorian, then received a bachelor’s degree from the University of Virginia in 2002 and a master’s degree in organizational management from the University of Phoenix in 2005. She currently serves on the Alexandria Community Criminal Justice Board, the Alexandria/Arlington Regional Workforce Council, the Arlington County Community Criminal Justice Board, the Leadership Center for Excellence Board (and Programs Committee) and the Community Progress Makers Advisory Council.

Changing course: I thought I was going to be a teacher. In Costa Rica, education is almost sacred. After UVA, I got a job in the front office of Patrick Henry Elementary as an assistant to the principal working with a lot of children whose parents were incarcerated. That’s when I started to think about this type of work. I’ve always believed that people make mistakes and deserve the opportunity to come back into the community, to share their gifts with the world.

Biggest shock: I went to the local prison, and my best friend from elementary school was there. I remember the sadness I felt knowing the potential of this amazing kid, the waste of talent, and the difference in our lives. I got to go home that day, and he had to stay.

Major misconceptions: Most people have misunderstandings about who is behind bars. They think everyone incarcerated is a bad person who comes from a violent past. As you start going into the facilities and talking to our men and women, it’s easy to see they’re like the rest of us, with the same hopes and dreams. They are not broken. It’s another human being who made a decision, and here’s where we are.

Biggest worries: How people are going to be received when they get out, what jobs they can get, how welcoming people will be. We had a man incarcerated for 32 years for drugs. He missed family, love, work and promotion. He’s now 55 and is never going to be able to retire. How’s that going to work for him?

Reentry hurdles: The inability of the people we work with to pay their court fees and the lack of affordable housing in Northern Virginia. Some people end up living with family members or in shelters. Others end up moving out of the area because they can’t afford it.

Words count: We don’t use the words inmate, offender or convict. We talk about people previously incarcerated or currently incarcerated. You are a human first and have the condition after. We talk about being on the journey with people, not serving people. We believe the person coming through our door is the expert on themselves.

Most unforgettable: We worked with someone who was in and out of incarceration on drug-related and trespassing charges since he was 14. Still, he was able to finish high school and was going to NOVA, even though he was living in his car. Other service providers were focusing on his homelessness. The first thing we asked him was, “What are your dreams?” He said he needed $800 to graduate from NOVA to help pay for his last courses and to cover books and supplies. We helped him, provided him with a cap and gown, and he graduated. We had a big pomp-and-circumstance party for him. He was able to get a place and find a job. It’s been three years, and he hasn’t come back to us. That means he’s doing well.

Facing the big 4-0: I come from a pura vida (pure life) culture. It’s all about happiness, taking one day at a time and doing good things for your fellow man and woman. For me, 40 means another year of being able to do great things, to be happy and enjoy life.