Feast your eyes on three showstopping kitchens in Arlington and McLean.

The Washington, D.C., region is known for many things, including its own little outpost of punk rock counterculture. But even punk musicians age, have children and eventually remodel their kitchens. Not surprisingly, they handle home renovation with a certain style. 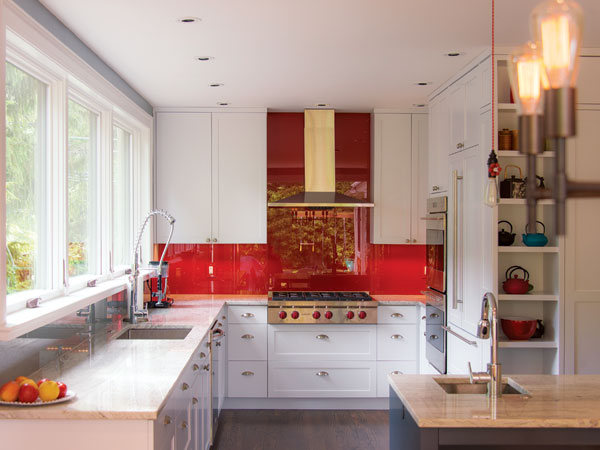 Arthur Noll plays bass for Alarms & Controls, a three-piece band that’s signed to the D.C.-based Dischord Records label. In 2013, he and his wife, Kristin, moved from Petworth in the District to the Old Glebe section of Arlington with their then-4-year-old daughter. But they didn’t wait long to give their traditional home a tune-up.

Within two weeks of moving, they were meeting with architects Anne Crowley and Michael Hall, the husband-and-wife owners of D.C.-based Studio CrowleyHall, about overhauling their new home’s dated kitchen. “Everything in there was at least 40 years old,” Arthur says.

Soon after, they brought in the D.C.-based custom builder Think Make Build to put the new design in motion.

To open up the space, the team took out a few walls and replaced them with load-carrying beams overhead. This move allowed for some contemporary additions, including an island with a bar sink and seating for three.

The real showstopper is the red-glass backsplash behind the Wolf cooktop. “We all agreed on the color,” Kristin says of the custom feature. “But to make it happen we had to paint the wall, then paint the back of the glass. I think they used automotive paint.”

The toughest part, Arthur says, was occupying the house during the four months that the renovation was underway. “It got very claustrophobic living through it,” he recalls. “We were doing dishes out in the garage.”
Fortunately, the hassle was short-lived, and the end result is a kitchen that defies convention. Rock on.