I stopped learning my parents' native tongue at a young age. Now I regret it. 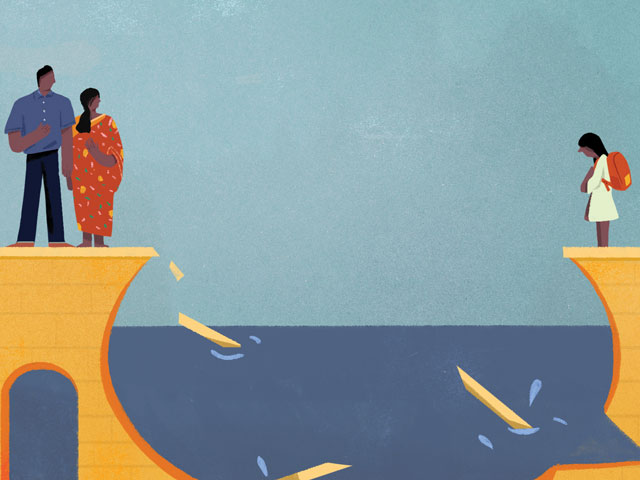 I smiled as hundreds of Indian uncles and aunties stared back disapprovingly, refusing to repeat a line so grammatically unsound. I could only imagine what my grandfather, an English professor, would have said if he were there.

Indians have long been proud of knowing English—proper, British English. Rapid growth in Indian immigration to the U.S. over the last 30 years was largely fueled by Indians having scientific expertise and speaking fluent English, making them excellent candidates for the H-1B visas given to highly skilled workers.

English is often seen as a marker of gentility in India, and fluency is a key to class mobility. Though Indian proficiency in English comes from a violent colonial history, English has long been a golden ticket to acceptance and success, and my immigrant parents wanted to ensure that I would speak it perfectly. But in learning English, I forgot how to speak the language of my parents, Telugu.

My parents were among the first Indian immigrants to settle in the predominantly white town of Corvallis, Oregon, in the early 1990s. When I was a toddler, they spoke to me only in Telugu, but my mother later decided to speak to me only in English—out of fear and the desire to see her child succeed in a country that saw bilingualism as a deficit and a threat. She was afraid that if we spoke Telugu at home, I would be put into an English as a Second Language (ESL) class; that I would be pulled out of regular classes to learn English and would fall behind in school.

English became the language we spoke at home, and the little Telugu I knew quickly fell out of use.
My English, however, was great. I was reading chapter books by the time I was 6, and I had a natural ear for grammar and spelling. Despite my mother’s endeavors, my school still dragged me out of my regular classes to drill me on my English, seeing it impossible that a brown girl with accented parents could possibly speak English well.

“And what’s this in your language?”

“Don’t you speak another language?”

The school tried its hardest to justify keeping me in ESL, wanting the extra state funding that came with every student enrolled, but I was grudgingly let go.

Not speaking Telugu didn’t somehow become a magical shield against racism. I was still called “Sacagawea” on the bus and had trouble getting cast in school plays. People loved to mock Indian accents and my Hindu faith. And despite my natural grasp of syntax and solid comprehension of the unreal conditional and the nominative and objective case structures, I found my English wasn’t perfect enough to avoid scrutiny.

My accented parents pronounced the word “embarrassed” with the emphasis on the last syllable, “embarrASSED.” When I said the word in class the way I had grown up hearing it, I was met with a contemptuous explosion of giggles.

In high school, I was in a play and had to say a line that had the word “stove,” which I pronounced as rhyming with “love.” When the director corrected me, saying it was pronounced “stove” like “cove,” I was astounded.

When I relayed the story years later to my college roommate—who was Indian—she was also shocked. “Stove is pronounced stove?” she said in awe.

But over time, the teasing slowed. By the time I was in college, bilingualism was all the rage, and criticism started to emerge from another direction.

“Why on earth did your parents not teach you your language?” a professor asked me, astonished. “That is very unfortunate.”

“We’re teaching our daughter French, Spanish and English,” a classmate’s mother beamed. “We think it’s valuable to be cosmopolitan.”

While my mother felt guilty, I felt mad. All throughout my childhood, school and society had taught me that I had to be American, speak English and act as white as possible. All of a sudden the rules changed, and it was “cool” to come from another culture. I was “supposed” to speak another language.

As I grew up, I saw the consequences of not having learned Telugu at a younger age. I loved Indian history and religion and would have loved to talk with my older family members in India about their lives, but I couldn’t communicate with them without my mother translating. I couldn’t enjoy Indian TV programs or listen to the family gossip. Most of all, it became difficult to connect to other Telugu people in the way language can.

I was recently at the Ballston Quarter Macy’s and overheard a man and his mother chatting in Telugu. They were having a hard time finding what they were looking for. We made eye contact.

“Emi chustunnaru?” I squeaked. “What are you looking for?”

The man’s mother, dressed in a seafoam green sari, smiled wide and began to chatter to me in rapid Telugu. But it quickly became apparent that beyond “emi chustunnaru,” I couldn’t reciprocate, and we drifted apart to do our own shopping. We were brought together by language for a split second, only to be pulled apart by the words I couldn’t speak.

People from immigrant communities struggle for acceptance on a daily basis. I still see parents who view monolingualism as imperative for their children to fit in, and kids who think speaking another language is uncool. Like my 6-year-old nephew, who said “I hate Telugu!” after his mother tried to get him to respond to a question in the language.

And yet, English has never really been the criterion for our acceptance. Indian-Americans can win the national spelling bee year after year after year, and people will still roll their eyes and angrily tweet, “Why can’t an AMERICAN win the spelling bee?”

For as long as immigrants are in this country, they will be seen as “other” if they look a different way.

I’ve decided that acting like everybody else will not make people of color more accepted, so we might as well embrace our culture, religion, histories and language to be fully ourselves. Others should see us as we truly are, not judging us or tokenizing us for speaking or not speaking another language.

As for me, I have spent the last year working to improve my Telugu. I can now read and write it, and that has helped with the speaking. It’s hard. At 23, I’ve passed the age where learning a language is simple. But I’m trying and learning so I can improve my connection to this beautiful Telugu diaspora I am a part of.

If I run into the elderly woman in the seafoam sari again, I hope we can have a moment of cheerful conversation, recognition and solidarity.

Sravya Tadepalli is a recent graduate of the University of Oregon and currently lives in Arlington. Her writing has been featured in Teaching Tolerance, the Portland Tribune, the Salem Statesman Journal, Oregon Humanities and the textbook America Now. She is also a 2018 Harry S. Truman Scholar.