The abrupt shift to remote instruction was painful, and it played out differently in every household. What did the spring of 2020 teach us? 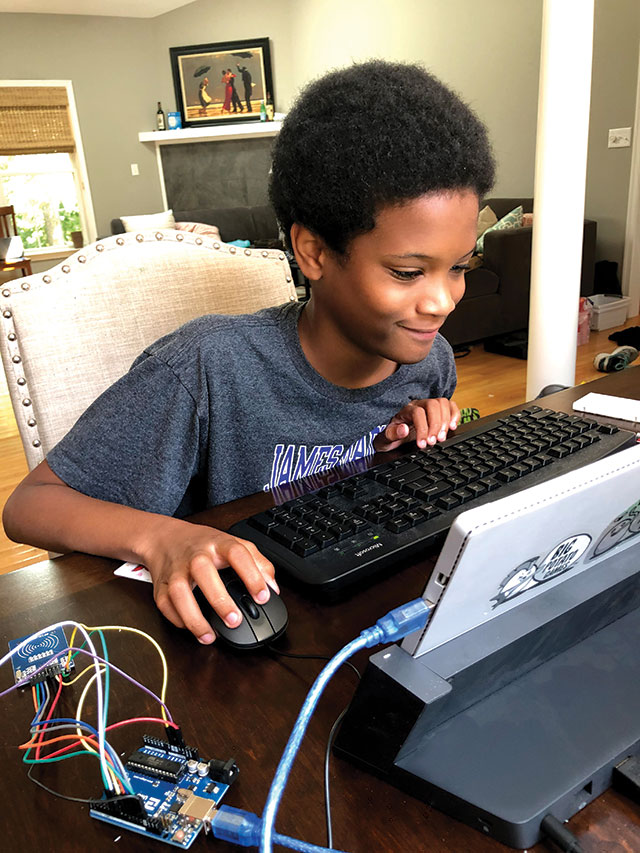 “Kids get devices in third grade, but many schools hadn’t been sending their devices home, so kids weren’t acculturated on to how to take a device home and use it,” Loft explains.

For families without internet access, APS provided MiFis—personal broadband devices—as a stopgap measure. “But they had limited capacity,” Loft says. “If you have more than one kid or someone else in your household who’s trying to get online, that’s going to eat up the internet for the day.”

Students’ home lives were yet another variable. “My home wasn’t a great environment for me to focus on schoolwork or attend online meetings,” says Netsanet Gumru, a recent Wakefield High School graduate who will be attending the University of Pittsburgh this fall. “I had to babysit my younger brother who’s in kindergarten and share space with my other brother who’s in 10th grade. All the places I usually study were closed. This pandemic affected all of my study habits and schedules.”

Gumru lives with her family at the Gates of Ballston, a subsidized housing complex run by AHC, a local nonprofit that provides social services and educational support for people in its communities.

“We’re working to make sure families can stay in their homes and put food on their tables,” says AHC communications director Celia Slater. “We help out with learning issues where we can. One little girl was trying to do her homework on her mom’s cellphone, so we got her a tablet. But some families don’t have Wi-Fi at home, and [community] hot spots are difficult to access if you don’t have transportation.”

For parents concerned about loss of learning, Loft offers the reassurance that their kids didn’t miss out on as much as they might think. Typically, “there are far fewer new concepts addressed in fourth quarter than in quarters two and three,” she says. “By not introducing new content, we were almost closing the gap, shoring up the foundation of everything they’d learned thus far.”

Not all parents saw it that way. “The lack of new content was a huge problem,” says one dad whose children attend Washington-Liberty High School. “It leads to boredom and disengagement. How exciting could it possibly be to get a one-way lesson on a topic that you’ve already been taught?

“I certainly support directing re-sources toward helping families overcome the opportunity gap,” he says. But he thinks APS’s decision to freeze the fourth-quarter curriculum likely only widened the disparity: “Households with greater resources or more-engaged parents will find private offerings to help make up that gap in new learning. The kids who will be most injured are those from disadvantaged households who depend on APS to provide access to educational opportunities.”

Or, as another Arlington parent puts it: “The same kids get left behind, they just get left behind in different ways. If anything, the divide is even more pronounced” when parents with means end up seeking private supplemental education for their kids.

Teachers did what they could to engage students remotely during quarantine. Though APS officially adopted an asynchronous model (meaning no live classes), teachers maintained regular “office hours” online. Some organized digital class meetups at their discretion, using various video streaming platforms. Those connections allowed them to touch base with students on everything from emotional well-being to AP test prep.

Swanson Middle School drama teacher Monique Caldwell worked with her cast and crew to reinvent the school’s spring production of A Wrinkle in Time as a virtual performance, conducting rehearsals and production meetings on Zoom and then Microsoft Teams. (The final production was streamed on Vimeo.)